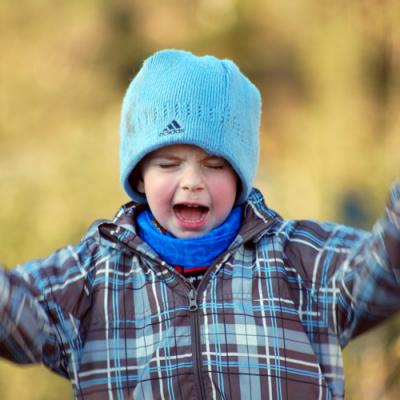 Walking along West Ninth Street one morning, I picked up the foot-printed schoolwork of a scribbling elementary kid.

"What is Anger?" the worksheet, provided by TherapistAid.com, reads at the top. Then it explains: "Even though it's normal to feel angry from time to time, it's never ok to be mean, break things, hurt others, or hurt yourself. Learning to control your anger is about learning new ways to act when you're upset."

The worksheet continues with "healthy things you can do when you feel angry. Circle the ones that you might like to try."

Of these 11 options, the child has circled 10 in blue Magic Marker: "Take deep breaths. Draw your anger. Do jumping jacks. Count to 100. Walk away. Talk to someone. Squeeze a stress ball. Play outside. Listen to music. Practice a hobby." The only non-circled option is "Write about your anger."

The next stapled page asks the child to "List some things that cause you to feel angry," which he or she has, in ironic sunny yellow.

On the last page is another explanation of anger as "a difficult feeling. … But did you know that it's normal to feel angry from time to time? It happens to everyone."

Of course it happens to everyone. Look around us: yet another thieving big bank; yet another circus-like presidential campaign; yet more laid-off workers; yet more resource-starved teachers and students; yet more corporations negligently polluting our air.

As the Erie Times-News reported on Oct. 4, "The Environmental Protection Agency is suing Erie Coke in U.S. District Court in Erie, claiming the company has failed to fix leaks of the chemical benzene, excessive exposure to which can cause cancer."

The pink breast cancer awareness ribbon in the ETN logo was almost too much.

Two days later, ETN reported that "Erie Coke Corp. has again agreed to pay a large fine to resolve claims over pollution at its plant at the foot of East Avenue."

There's a lot more to the story, of course. But perpetually, corporations pay their way out of protecting surrounding communities from carcinogens. And perpetually, we seek cures for the disease, rather than its cause.

And our anger goes unharnessed.

Meanwhile, that worksheet also says, "When you're angry, you might do bad things that you wouldn't do if you were happy." But what about the good things anger could make us do? Protest. Boycott. Organize.

Even write about our anger. To our elected officials, to corporate leaders, to editors, to each other.

It's promising that this worksheet normalizes anger for children. From many other angles in these hyper-optimistic United States, the message they – and we – receive is that constant outward happiness is the ultimate goal.

And if you don't have it? You're doing something wrong, or there's something wrong with you. So here – take this pill. Buy this new device. Go on this diet. Or, you know, feel like a failure because you should be happy – and geez, why don't you smile more?

Fully feeling the anger that arises when we learn that Erie Coke is accused of releasing cancer-causing benzene into our city allows us to feel anger the world over, in communities having to clean up after corporations that dump toxic waste or mine precious resources.

But as Krishnamurti famously said, "It is no measure of health to be well adjusted to a profoundly sick society."

So I wish that worksheet had emphatically reassured children that it's okay to feel their anger. That the hot, jagged sludge that boils up from the pit of their stomachs and clenches their shoulders and jaws can be repurposed for good – if they learn to use it wisely.

Fully feeling the anger that arises when we learn that Erie Coke is accused of releasing cancer-causing benzene into our city allows us to feel anger the world over, in communities having to clean up after corporations that dump toxic waste or mine precious resources. These companies do not deserve our money. In that way, anger makes us better consumers. Better global citizens. Better human beings.

Eventually, we might even have less to get angry about.