He?s calling his 2-1 record from last week ?just so-so.? See who LeeS has lined up for this week as he?s calling MLB playoffs and MNF. 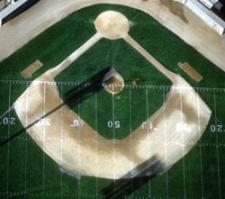 Former Erieite Bob Sanders, who signed with the San Diego Chargers in the offseason after spending his career in Indianapolis, has again made it to season-ending Injured Reserve after injuring his knee in the second game of this season while playing at New England.  The former 2007 Defensive Player of the year had played in 50 NFL games while missing 78 until this injury occurred.  Did anyone expect Sanders to actually play in 16 games this season?  I was not one, but I thought that he would manage more than two.

It went in low under the radar, like a Tomahawk cruise missile, but many were not even aware that Steelers? receiver Hines Ward was arrested over the summer for DUI.  Never mind that you would think that a veteran such as Ward wouldn?t be doing something like that because we assumed that he not only had talent, but a brain as well, but oddly, he received no discipline from the NFL.  If you?re thinking that there was no bargaining agreement, therefore no NFL jurisdiction, then you would be wrong because you have to look no farther than Bengals? RB Cedric Benson, who is suspended for three games for a domestic violence incident over the summer as well as a list of other known NFL law breakers/thugs/miscreants who are on commissioner Goodell?s mandatory vacation list.

Also in the NFL, and as expected, Chicago QB Jay Cutler continues to be a tackling dummy for opposing defenses.  Offensive Coordinator Mike Martz is holding fast to his down-field passing gameplan, which allows Cutler to be targeted often by salivating linemen.  I can only think that Martz is receiving significant kickbacks from the opposition by allowing defensive players league-wide to pad their stats with hurries, knockdowns, and sacks.  They should post a weekly over-under on the hits Cutler absorbs, and they can also make some change in Vegas.  Better hurry though, Cutler could be on IR in the blink of an eye.

Hey, everyone else is seeing this stuff, right?

The NFL games on Sunday, Oct. 2 brought along the typical number of surprises.  For example, I did not expect The Steelers to lose to the Texans, but the Texans? defense got to Roethlisberger five times, and oddly, Houston?s running game ran all over that vaunted defense.

Detroit should collect some cash and make sure that Tony Romo dines out for free for the remainder of the season because he kept them in the win column by giving the Lions the ball three times by interception, and not knowing what else to do with it, they scored.  Vintage Romo: win a game by sheer grit and then give the next one away.  Note to Jason Garrett: Whenever you have a lead, sit Romo and run out the clock.  Tony Romo, a.k.a. ?The Coach Killer?.

Cincinnati is 2-2?  Sure enough QB Andy Dalton ? after throwing two interceptions, put together just enough to send Buffalo to defeat with a game-ending field goal.

Someone please help me to understand how San Francisco is 3-1 while the Philadelphia Eagles are 1-3.  Wasn?t it supposed to be the other way around?  Yeah, that?s what I thought.  The Eagles were crushing them on Sunday and the Forty-Niners just kept plugging away and came up with the win in Philadelphia yet.

We did learn that the Cleveland Browns can beat bad teams but not the good ones.  In other news, the stock market continues to be quite volatile.

Recap:
The Monday night NFL game was the Washington Redskins at Dallas Cowboys.  Tony Romo did end up playing the entire game, although the offense looked completely out-of-sync.  The Cowboys settled for six field goals and won, 18-16 over the Redskins.

For Tuesday, we went back to baseball with the New York Yankees at the St. Petersburg Rays.  I went with the Rays who came back to win it, 5-3 with home runs by Matt Joyce and Ben Zobrist as well as a perfectly executed triple play, the third time in the Rays? history.

For Wednesday, the Philadelphia Phillies at the Atlanta Braves ? a battle between first and second place teams in the NL East.  Atlanta couldn?t catch Philly, but they needed to win to stay in the NL Wild Card race.  I took Atlanta in this tilt.  I was wrong on this one as Atlanta not only dropped this game but lost their last five of the season as well as their chance at the Wild Card.  A serious collapse.

The Picks:
Since the MLB playoffs begin on Friday and with the AL and on Saturday with the NL, I decided to pick some games and to stick with the Monday Night Football game as well.

For Monday Night Football, we have Indianapolis at Tampa bay.  The Colts, as we know are suffering an ugly fate without Peyton Manning, and now they?ve lost starting safety Melvin Bullitt and MLB Gary Brackett.  They also have to start *gulp* QB Curtis Painter against an up-and-coming Buccaneers team.  I?m picking Tampa to clean their proverbial clocks.

Since the ALDS and NLDS are underway, and I don?t trust the weather for daily picks, I?m going for the Division Series winners, even though they?ve started in earnest.  Hey, fire me.

Detroit ? New York: Logic tells me to pick the despicable Yankees, but I just can?t manage to get there because I ultimately think that Tigers closer Jose Valverde will save the day.  Get it, save?  Picking Detroit to move on.

St. Petersburg -Texas: Again, there should be no way that the Rays will come out on top, but regardless, defense and pitching ? which they have in abundance -- wins championships.  Going with the Rays to win this series.

Milwaukee - Arizona: We all know that there is no better team at home than the Brewer?s and they have home field.  Who can argue with that?  Picking the Brew Crew to get in the NLCS.

Philadelphia ? St. Louis: I have the utmost respect for what the Cardinals did to make it into the postseason when they were basically out of it.  There, now we can move on.  Picking the Phillies to put smiles on the frowning faces in the City of Brotherly Love after having watched the dreadful Eagles.

And another thing:
Funny things happen when you don?t have an offseason in the NFL.  Teams with offenses that were already installed before the lockout (many) seem to have an edge over teams with new systems being implemented (Tennessee, Cleveland, Kansas City).  Teams that once relied heavily on defense don?t look the same this year (N.Y.Jets, New England, San Diego) and then you have teams that most of us don?t remember as being contenders (Buffalo, Detroit), and they reside in first place in their respective divisions and then perennial contenders looking like anything but that (Pittsburgh, Atlanta, Philadelphia).

It?s the new Mother Nature taking over.  Out with the old and in with the new, as the saying goes, and it certainly looks like the Have Nots of yesterday are the Haves of today.  Time for a change.

Far out:
This past Wednesday night was the most exciting end to a regular season that Major League Baseball has ever seen.  You couldn?t have written it up any better.  The rise of the Rays and the tragic fall of both the Braves and Red Sox are now complete, while Boston has experienced the biggest letdown ever seen in baseball.  I can?t quite place all of the blame on either GM Theo Epstein or manager Terry Francona as I see the primary reason lying mainly with the players.

They were the same people who managed to get into first place and then did basically nothing to stay there in September.  It was Epstein, however, that signed players like Daisuke Matsuzaka, John Lackey, Carl Crawford, and J.D. Drew who were basically invisible and/or a serious waste of some really big money and getting players to play is the manager?s primary responsibility and it didn?t happen in the end.  Retired player Dennis Eckersley recently mentioned that the atmosphere in the Red Sox clubhouse resembled more of a country club than a professional baseball team, but I?m not sure if that resembled Jim Rice?s playing days when 25 players took 25 taxis.  I know that the fans are not showing up to see a bunch of high-priced prima donnas waltz around in a trance, especially at those ticket prices, and if you watched the Sox over the last couple of weeks, then that?s what you were seeing.

Note: Terry Francona will no longer be managing the team, and he and the Sox have parted ways.  Rumor has it that ownership wants a more stat driven club and the difference in opinion was unwanted.  The man won two championships and many playoff appearances in his eight years at the helm, the best manager the Red Sox ever had, will be replaced by someone that falls into the rank and file a little better.  Sounds like a recipe for another 86 years without a championship to this malcontent.

The Rays, with essentially a $42 million annual payroll and the Red Sox at $160 million are not only very far apart in figures, but in actual play as well, as the facts of the last few weeks painfully support.

You heard it here:
When I heard that Ozzie had left the building in Chicago, I was quite surprised to see him show up in Miami as the new manager of the Marlins.  That is one moribund franchise that seems to attract the same number of fans as a typical Single A baseball team.  Mr. Guillen may be one serious space cadet, but he does manage to get a lot from his players.  If nothing else, the fans may show up just to see what he will do next.  He?s a funny guy.

Hit ?em where they live:
Losing is habit forming, just like winning.  The Miami Dolphins are the perfect example, like the Minnesota Twins, sorry, Vikings.  The Fish lost to a good Chargers team, but the Vikings lost to a moribund Kansas City club.  It?s too bad that the NFL doesn?t have a Bad Team venue, where you can change the schedule to have bad teams fight it out with other bad teams.  That would be a lot more fun.  You can see Miami making a coaching change and picking former head coach Mike Nolan ? their current defensive coordinator -- to take over as interim coach once Tony Sparano has been relieved of this fiasco.  Nolan isn?t an upgrade, however, especially since it?s his defense that?s basically killing them.

Meanwhile, back at the ranch, the Detroit Lions, at 4-0 actually once started the season at 5-0 and missed the playoffs.   I expect that the same fate will await them this season as well.

Have a great week,
Lee