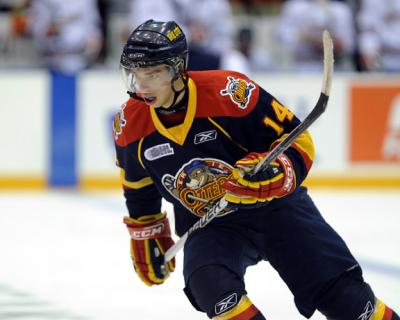 With the stage lights from tonight's Rascal Flatts concert hanging from the rafters of the Tullio Arena, the Erie Otters decided to give the 3,171 fans an entertaining show of their own.

Greg McKegg scored four goals, winger Shawn Szydlowski had four assists and Ramis Sadikov made 22 saves as the Otters defeated Western Conference-leading Owen Sound 6-2 Wednesday evening. In all, the top line of McKegg, Szydlowski and Mike Cazzola accounted for 11of the 16 points.

"We kept our feet moving and got pucks deep," said McKegg, whose four goal performance was his second of this season, as he torched the Belleville Bulls for the same amount Thanksgiving night. "We haven't really been clicking the best like (our second line). So we kind of took a page out of their book tonight."

The line he was referring too was the surging second line of Brett Thompson, Phil Varone and Anthony Luciani, who combined to record 42 points in the last five games leading into Wednesday night's division battle.

Apparently McKegg, who went the previous seven games without a goal, decided to carry the offensive load Wednesday.

After Brett Appio put Erie ahead 1-0 with an innocent wrist shot from the boards, McKegg put the next two goals behind Attack goalie Michael Zador for his first two goals of the game.

The struggles from McKegg prior to this game were obvious to him, but assistant coach Mike Nelson gave him some sound advice earlier this week in practice.

"It's kind of nice to talk to someone once and a while," McKegg said. "(Nelson) has played the game for a while; he knows what I was going through. You could tell I was gripping the stick a little tight and wasn't really having much fun out there.

"He just told me to 'get back to the basics and keep the game simple, and you'll be fine.'"
Sandwiched between the two McKegg goals was Roman Berdnikov's fourth of the season, which made it 3-1 after a wild 20 minutes of play.

You can add two more to that.

Brett Thompson scored his 38th of the year, while McKegg put the finishing touches on his hat trick, while the defense held the Attack to just nine shots, as Erie took a commanding 5-2 lead after 40 minutes of play. The only blemish was Garrett Wilson's goal 8:58 into the period.

"Our guys came out and played hard," coach Robbie Ftorek said. "When you do those things, you're going to get some chances. Some nights, everything is just working well."

McKegg would add the only goal of the scoring on a nice forehand-backhand move late in the third period, where the Otters concentrated on defense, firing just four shots on net. Erie finished with 25 shots on goal.

In the last five games, Erie has scored at least five goals or more in five of its six games in February and have a total of 220 on the season, second best in the Midwest Division.

"We've been playing well the last couple of weekends," Szydlowski said. "When we get our offense going, the goals are going to come like that."

It was the Otters' sixth consecutive win inside the Tullio Arena, and third consecutive win overall.
With just 12 games remaining in the regular season, the Otters are in sole possession of sixth place. Only the top-four seeds get home ice advantage in the playoffs.  Erie is just three points behind fourth-place Windsor.

But as much as they want to scoreboard watch, the recipe for the Otters' success is simple – just win.
"Wins are what are important," Ftorek said. "Everybody has to chip in this time of year."