Owen, Sigur R?s, Noel Gallagher, and Lisa Hannigan. All reviewed for your reading and listening pleasure. 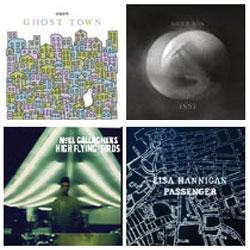 Owen / Ghost Town
Polyvinyl Records
Over the past decade, Mike Kinsella has openly shared his thoughts on self-loathing and troubled love under the moniker Owen. After abandoning the sonic experimentation and bizarre time signatures of previous bands such as Cap'n Jazz and American Football, Kinsella has successfully armed himself with an acoustic guitar and bittersweet lyrics. On "Ghost Town," however, Kinsella allows his music to get a little louder. Throughout the album, Kinsella accompanies his musings on his up-and-down relationship with his wife, his young daughter, and his rocky relationship with a higher power with lush instrumentation, building up to emotionally-driven bursts of electric guitar in album standouts "I Believe" and "Everyone's Asleep in the House but Me." At just 34, Kinsella sounds weary beyond his years on "Ghost Town," but his suffering just seems to get better with age.  4.5/5 - Alex Bieler

Sigur R?s / Inni
XL Recordings
Recorded at North London's Alexandra Palace back in 2008, "Inni" documents Sigur R?s' final live performance before its hiatus. With the band coming out of its break to tour in 2011, "Inni" acts as a reminder for how well Sigur R?s' music translates on stage. The Icelandic quartet have been known for their ethereal sound since the late '90s, amazing listeners with sonic landscapes built up with uplifting piano, terrifyingly beautiful clashes of bowed guitar, and J?n ??r "J?nsi" Birgisson's swirling falsetto. Each of Sigur R?s' full-length albums are represented on the compilation, with 2005's "Takk…" and 2008's "Me? su? ? eyrum vi? spilum endalaust" making up nine of the 15 tracks. "Inni" saves the best for last, however, with "L?ppulagi?" serving as the band's first new material in three years. A real treat for Sigur R?s fans.  4.5/5 - Alex Bieler

Noel Gallagher's High Flying Birds
Mercury
After 15 years with Oasis, "Noel Gallagher's High Flying Birds" marks the elder Gallagher brother's first album release after leaving the hugely popular Britpop sensation. Even without the sibling squabbles, the new album isn't too much of a stretch from Gallagher's previous musical stomping grounds. Still, "High Flying Birds" shows that without brother Liam, Gallagher is more than capable at songwriting, even though both "(I Wanna Live a Dream in My) Record Machine" and album closer "Stop the Clocks" were both recorded as demos for Oasis. The album shows promise with the single "If I Had a Gun…," which will sadly be doomed to "Wonderwall" comparisons. In fact, with all the mid-tempo, stadium friendly tunes, "High Flying Birds" can't shake Gallagher's Oasis connection. It's not a deal breaker, but more originality in the album could make it fly higher.  3.5/5 - Alex Bieler

Lisa Hannigan / Passenger
ATO Records / Red
"Passenger," while entertaining and catchy, shifts through songs without finding new ground from 2008's "Sea Sew." Hannigan's wispy, honey-smooth voice remains the main feature and is best on "Knots," a PJ Harvey-esque swing- and stomp-style track that swells with energy and motion. But her voice—the most notable thing distinguishing Hannigan from the Feists and Florences of the world—gets lost in her duet with Ray LaMontagne, "O Sleep," where his gravely, airy voice overpowers and steals her range, forcing her into an uncomfortable upper-register. Her wit—the second most notable feature—is at home the album's title track and at play with a nod to Leonard Coen in her "Little Bird" but awkward stumbles in "Safe Travels." Good tracks for an afternoon drive, "Passenger" is a welcomed listen but won't tell you much you don't already know from Hannigan.  3.5/5 - Ben Speggen