And now for your listening pleasure, four albums reviewed (check it out: two five-star picks!) 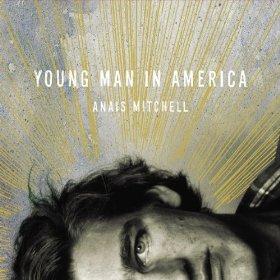 Anaïs Mitchell
Young Man in America
Wilderland Records
After busting out onto the folk scene with "Hadestown," an immense 20-track concept album based on the story of Orpheus and Eurydice, Anaïs Mitchell scales back on "Young Man in America," but the results are equally as tremendous. The album revolves around a couple themes – the trials of parenthood and troubled relationships – all based in America's current recession. Throughout "America," we hear of parents trying to work through troubled times. It's no surprise that fathers factor into the theme so much when a photo of Mitchell's own dad adorns the cover. The beautiful yet tragic "Shepard" even tells a tale Mitchell's father wrote about a man trying to save his harvest after his wife dies of childbirth. Beautiful and tragic throughout, Mitchell distinctive voice and lush instrumentation carries each song, pushing the album from wonderful listen to something that truly matters.
5/5

White Rabbits
Milk Famous
TBD Records
After releasing "It's Frightening" back in 2009, White Rabbits was pegged as Spoon-lite. It wasn't surprising, especially with Spoon frontman Britt Daniel producing the solid sophomore effort, but it did raise some questions about whether White Rabbits were trying too much to be something else. Fast forward to 2012, "Milk Famous" still has several elements  of Spoonishness, including former producer Mike McCarthy. While the sounds of driving piano and perfectly imperfect notes fill the album with Spoon-inspired touches, "Milk Famous" stands on its own. Starting off with the swirling synths and looped beats of opener "Heavy Metal," the album immediately draws the listener in with its exquisitely arranged hynoptic sound. Instead of sounding like a knockoff, "I'm Not Me" and "I Had It Coming" display the growth of White Rabbits, proving that just because a band is inspired by another doesn't mean they can't rock.
4/5

Andrew Bird's "Break It Yourself," his seventh full-length album, has everything that you would expect. With more historical references and enough long words to make a thesaurus-enthusiast drool, Andrew Bird exudes a certain quirky brilliance. Pair that with his unique blend of swirling violins, glockenspiel and an ability to whistle that's matched by few, if any, and the multi-instrumentalist has created a unique niche in indie music. "Break It Yourself" serves as one of Bird's most approachable albums, with enough pop-sensibility to draw in new fans while still providing hardcore Bird listeners with an hour's worth of hyper-literate tracks. Lead single "Eyeoneye" serves as a nice appetizer before a full course of Bird's regular fare of orchestral pop. The true magic lies in tracks like "Lazy Projector" and "Near Death Experience," where Bird's musical style captivates with its charm and uniqueness.
4/5

Warning: this isn't your old "we can pick ourselves up by our bootstraps" Springsteen. This is something new, something dark, something different. When times get tough, we get to work and fix things; that's America, the old Bruce would sing. The new Bruce seems more bent on grabbing a mirror to show us our reflections than to take a candle and lead us to hope. And Bruce does this deliberately with a clear connection to '84's "My Hometown" with the new "Death to My Hometown." Before Bruce was proud to be Born in the U.S.A.; now his U.S.A. appears as a wasteland laid out in front of the old troubadour. But just The Boss got us through 9/11 with "The Rising," he'll get us through this Great Recession, and the square kick in the gut "Wrecking Ball" delivers is one we much need to get us moving again in the right direction.
5/5