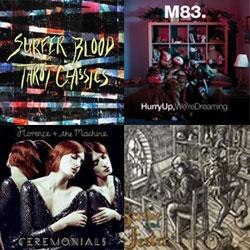 The Floridian indie-rockers return after their 2010 debut "Astro Coast" with a four-song taste test of what's to come. Like its predecessor, "Tarot Classics" showcases the band's ability to produce insanely melodic power-pop, driven along by a combination of catchy guitar hooks and frontman JP Pitts' stately tenor. While not hugely different from "Astro," Surfer Blood seems more polished on the new EP, even showing a willingness to try some different sounds. Mid-tempo opener "I'm Not Ready" bounces along for four-and-a-half minutes before "Miranda" speeds things up as Pitts questions the title character's decision to end things between them. From there, the band shifts effortlessly into the more melancholy "Voyager Reprise" before mixing it up with the spacey, reverb-laden vocals of "Drinking Problem" It may not be a ton of new content, but it's still four good songs.

After working on a few new tracks earlier this year, M83's Anthony Gonzalez said he was headed toward something "very, very epic." After releasing "Hurry Up, We're Dreaming," a 70-plus minute double album about the variety of dreams, the Frenchman follows through on that promise. Gonzalez surprises around every turn, combining electronic soundscapes with '80s twists reminiscent of Duran Duran and "Joshua Tree"-era U2 at different times. Shortly after "Intro" draws you in with its atmospheric build-up, the synth beats of "Midnight City" keeps your toe tapping. "Dreaming" twists and turns wonderfully, going from stunning slow-burning electronic shoegaze in "Wait" to a child's dream about a magic frog in the playful "Raconte-Moi Une Histoire." Like many double albums, "Dreaming" runs a little long, but the album still provides an enjoyably dense listen throughout.

Two years after exploding onto the music scene with her debut album "Lungs," Florence Welsh makes a strong return with her newest record. Much in the same vein of "Cosmic Love" from her prior effort, "Ceremonials" sets out to showcase the English singer's voice with a steady stream of ethereal walls built up of harp, piano, and more. Welsh's wails were always striking, but now she seems to carry notes more confidently, giving tracks such as "Heartlines" and "Shake It Out" a welcomed extra kick. One slight drawback to "Ceremonials" lies in the singularity the tracks seem to follow. Where "Lungs" would mix up styles on occasion, the new record sticks to arena-sized orchestration. However, those anthemic tunes are more than enough to avoid the dreaded sophomore slump.

Billed as "edgy folk music (for not-so-edgy people)," Tom Hitt embraces the "not-so-edgy" side of things on 2011's "Scribe and Jester." Where as "Scribe and Jester's" predecessor, "Glimpses," featured heavier, chunkier distorted guitars that at times overpowered Hitt's catchy vocals and lyrics, Hitt's sophomore effort pulls the vocals and lyrics to the front, highlighting Hitt's strongest suit, giving his approach and delivery an Elvis Costello-esque feel, especially notable in "Lick My Wounds," one of the album's strongest tracks. Many catchy, fun, and thoughtful track populate the album, but some could be skipped easily. "The Southern Saying Song" and "In the Biblical Sense" come off as gimmicky, undercutting the profoundness of the album opener and closer: "Just Bend" or the sweet sincerity of "Superhero Kid." Overall, a pleasantly fun album that captures the talent of a great song crafter.