The lineage of asparagus and liquor store labyrinths 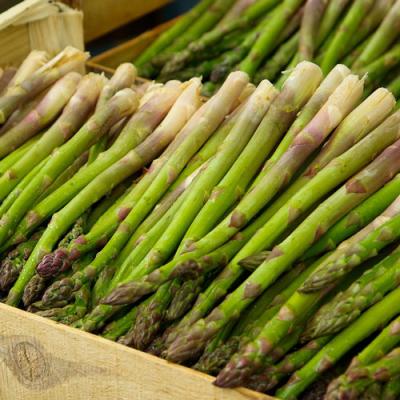 The inexplicable ease with which foreign hackers attack U.S. computers and security systems is finally grabbing the attention of officials. In a March Washington Post report, a technology expert from Britain's King's College London told a reporter of his astonishment to realize that the "security chips" on Congressional staff members' identification badges are fake: The badge "doesn't actually have a proper chip," he said. "It has a picture of a chip." Apparently, he added, "It's (there) only to prevent chip envy." [Washington Post, 3-31-2017]

Suzette Welton has been in prison in Alaska for 17 years based almost solely on now-debunked forensic evidence, but the state's lack of a clemency process means she cannot challenge her life sentence unless she proves "complete" innocence. Evidence that the fire that killed her son was "arson" was based not on science but on widely believed (but wrong) folklore on how intentional fires burn differently than accidental ones. (The bogus arson "trademarks" are similar to those used to convict Texan Cameron Todd Willingham, who suffered an even worse fate than Welton's: Willingham was executed for his "arson" in 2004.) [Alaska Dispatch News, 5-14-2017]

Reverence for the lineage of asparagus continues in epic yearly Anglican church festivities in Worcester, England, where in April celebrants obtained a special blessing for the vegetable by local priests as a costumed asparagus pranced through the street praising the stalks as representing "the generosity of God." Critics (including clergy from other parishes) likened the parades to a Monty Python sketch, and "an infantile pantomime," with one pleading plaintively, "Really, for (God's) sake," can't the Church of England offer "more dignified" worship? [Daily Telegraph, 4-25-2017]

(1) Andrew Bogut, signed as a free agent by the NBA's Cleveland Cavaliers in March and expected to be a key player in the team's quest to defend its league championship, checked into his first game and played 58 seconds before crashing into a bench and breaking his leg. For that 58 seconds, the Cavs owe Bogut $383,000. (2) Jose Calderon signed as a free agent with the Golden State Warriors in March, but the NBA-leading Warriors changed their mind (for unforeseen reasons) two hours after the deal and released Calderon. For his 119 minutes as a Warrior (6:06 p.m. to 8:05 p.m.), Calderon was paid $415,000. [Cleveland.com, 3-7-2017] [San Jose Mercury News, 3-2-2017]

In May, as Taunton, Massachusetts, police were about to arrest Amy Rebello-McCarthy, 39, for DUI after she left the road and crashed through several mailboxes (with the crash causing all of her tires to deflate), she, laughing, told officers there was one other thing: She had a bearded dragon in her bra (where it was riding while she drove). The lizard was turned over to animal control. [Providence Journal, 5-16-2017]

Felicia Nevins complained to reporters in May that the Pasco County (Florida) Sheriff's Office had improperly drawn attention to her on a matter of a purely personal nature that she had called for help, concerned that the sperm she was storing for in-vitro fertilization (kept under liquid nitrogen in a thermos) might explode. Deputies had placed the details (but not her name) on the office's Facebook page, but the Tampa Bay Times deduced her name from public sources. [Tampa Bay Times, 5-20-2017]

In a legislative battle waged since a 1979 state court decision, some North Carolinians tried once again this year to change a state law that explicitly states that once a person (almost always, of course, a "female") has "consented" to an act of sexual intercourse, that consent cannot be withdrawn even if the encounter turns violent. (The violence might be prosecuted as an "assault," but never the more serious crime of "rape.") Said state Sen. Jeff Jackson, whose bill to change the law failed in April to get a legislative hearing, "We're the only state in the country where 'no' doesn't mean 'no.'" [WRAL-TV (Raleigh-Durham), 5-2-2017]

Skills: (1) In May, the British tribunal dealing with student cheating rejected the appeal of a law student who was caught taking an in-class exam with her textbook open (permitted) but containing handwritten notes in the margins not permitted, but written in invisible ink legible via the UV light on her pen. (2) On testing day in March for Romania's 14- and 15-year-olds, administrators of the country's popular DEX online dictionary, acting on suspicion, changed the definitions of two words likely to be improperly looked up by cheaters during the exam. "(H)undreds" of school searches for the words took place that morning, but administrators were still mulling an appropriate punishment for the cheaters (who were, of course, easily identified by their misapplication of the suspect words). [NBC News, 5-6-2017] [BBC News, 3-16-2017]

With limited trade, investment and ownership rights, many Cuban producers are forced to improvise in order to bring products to market like Orestes Estevez, a Havana winemaker, who finds condoms indispensable, according to an April Associated Press dispatch. The "most remarkable sight" the reporter saw was "hundreds of (open) bottles capped with condoms," which inflate from gases as the fruit ferments. When fermentation is done, the condom goes limp. (The AP also noted that fishermen use condoms to carry bait far from shore and which also increase tugging resistance when nibbling fish fight the line.) [Associated Press via Virgin Islands Daily News, 4-4-2017]

India's Supreme Court approved an order recently that forced bars and liquor stores to close down if they were located less than 500 meters (1,640 feet) from state or national highways. India Times reported in April that the Aishwarya Bar in North Paravoor, Kerala, is still (legally) operating at its old location even though it is clearly within the 500-meter restricted area. The owner explained that since he owns the land behind the bar, too, he had constructed a "serpentine" wooden maze in back and front that requires any entering customer to take the equivalent number of steps it would take to walk 500 meters. (A tax office official reluctantly accepted the arrangement.) [India Times, 4-8-2017]

Canadian Anton Pilipa, 39, who suffers from schizophrenia, was discovered safe in the Amazon rainforest state of Rondonia, Brazil, in November 2016, which was the first sighting of him since his disappearance in March 2012. He was unable to communicate well and had no ID or money, but his family has actively been searching for him and believe the only way he could have traveled from the family home in Scarborough, Ontario, to Brazil (6,300 miles) was by hitchhiking or walking. (Bonus: The area in which he was found is noted for alligators and snakes.) [CTV News, 2-9-2017]

Secrets of Highly Successful Business Owners: When Michelle Esquenazi was asked by a New York Post reporter in September (2013) why her all-female crew of licensed bounty hunters (Empire Bail Bonds of New York) is so successful at tricking bail-jumpers into the open, she offered a (five-letter-long) euphemism for a female body part. "It's timeless," she counseled. "Of course he's going to open his door for a nice piece of (deleted)." "The thing about defendants is no matter who they are (of whatever color), they're all dumb. Every single last one of them is stupid." [New York Post, 9-27-2013]