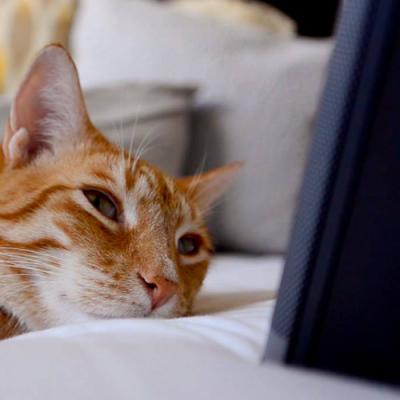 Longtime National Symphony cellist David Teie announced in November that his crowdfunding project was hugely successful, freeing him to produce an album of music meaningful to cats. (Cats, for example, relax in response to the earliest sound of their mother's purring, which Teie clocked at 23 harp notes a second.) Teie's work, according to an October Washington Post feature, includes examining waveforms of real-time purrs and creating an organ sound to mimic the opening and closing of a cat's vocal chords. His KickStarter pitch raised so much money that he might also try creating music for bored zoo elephants or stressed-out whales. In tests, cats responded well to Teie's music, according to a 2015 journal article (but with less curiosity at the Washington cat cafe Crumbs & Whiskers). [Washington Post, 10-18-2015, 11-29-2015]

Amazon.com has riled up Buddhist temples in Japan, according to a January Associated Press dispatch, by offering traveling monks rentable online to conduct funerals and other rituals. The monk would go to a home, grave or funeral home, at fees and upgrades ranging from the equivalent of $300 to about $8,500. (Many of Japan's 75,000 Buddhist temples are struggling financially and destined to close. Complained a spokesman for the Japan Buddhist Association, what Amazon is facilitating "is allowed in no other country in the world.") [Associated Press, 1-30-2016]

In February, Gawker.com introduced the semi-serious Lube Crude Index as a poignant indicator of how far the price of oil has fallen. Comparing the world price of a standard 42-gallon barrel of crude (about $31) with that of a 55-gallon barrel of Passion Natural Water-Based Lubricant (retailing as, when packaged in smaller quantities, a sexual aid) shows that "sex lube" is more valuable than crude oil by a factor of 28 — a barrel's worth of the lube recently priced at $1,175 versus crude's barrel-adjusted $41. As recently as June 2014, the Lube Crude Index was near 1. (Gawker reported that only two actual barrels of Passion Natural could be found and that the price would likely rise further if one of them were sold.) [Gawker.com, 2-3-2016]

Angel Rivera, 49, was arrested in December in Orlando, Florida, on allegations that he punched a child in the face because the boy was not getting dressed for church fast enough. (The boy was wearing an ankle brace, which slowed him down.) (2) Ryan Dailey, 28, was arrested in Las Cruces, New Mexico, in February on several charges after, police said, he beat his mother by pounding her with a Bible. His explanation, police said, was that when he asked her who her soul belonged to, she repeatedly declined to answer. [WKMG-TV (Orlando), 12-21-2015] [Las Cruces Sun-News, 2-9-2016]

The much-maligned pigeon was recently found by researchers to be as skilled as humans at distinguishing between slides of benign versus malignant human breast tissue. Writing in the journal PLOS ONE, specialists from the University of Iowa and University of California, Davis lauded the birds' processing of color, contrast, brightness and image compression, marveling that pigeons see more wavelengths of light than humans, even though their brains are one-thousandth the size. (Birds are already known to distinguish "hostile" humans in celebrated dive-pecking incidents.) [CNN, 11-20-2015]

A near-certain robbery of the PNC Bank in Zebulon, North Carolina, on Jan. 28 was prevented, with employees treated to an almost-slapstick scene in which the bank manager kept the suspect outside by winning a tug-of-war for control of the front door. The manager had grabbed the door after noticing an armed, masked man approaching from the parking lot just after the bank opened. (The frustrated perp fled empty-handed, but was at large.) [WTVD-TV (Raleigh, N.C.), 1-29-2016]

Awkward Moments Ahead in Lockup: (1) Joel Sloan, 51, was booked into jail for DUI by a sheriff's deputy in Birmingham, Alabama, in February. Sloan was dressed head-to-toe as a clown. (No explanation was offered.) (2) Vaughn Tucker, 23, was booked into jail in Tulsa, Oklahoma, in February on drug charges. He was wearing a T-shirt with large lettering on the front: "I Would Cuddle You So Hard." [Al.com (Birmingham), 2-7-2016] [The Smoking Gun, 2-8-2016]

Didn't Think It Through: The robbers of the electronics store Compucell in Springfield, Massachusetts, in December came up empty, but are still at large. A man with a gun jumped the counter and demanded that the employee give him money from the locked cash register. The gunman moved to the back door to let in his accomplice, but that merely allowed the employee and two customers to run out the front door, and the accomplice fled, too, sensing that, with no one to unlock the register, the "robbery" was going nowhere. [The Republican (Springfield), 2-16-2016]

American hunters are so trophy-kill-obsessed that, in the decade ending in 2014 (according to Humane Society figures), they averaged nine imported carcasses a day among the "Big Five" African species (lions, elephants, leopards, rhinos and African buffalo) — most of which require special U.S. and foreign permits, with "conservation" conditions. Some countries endanger their own dwindling herds just to sell the lucrative permits, and South Africa even offers 150 captive lions a year to make trophy kills easier. (Total hunting imports of all animal trophies averaged 345 a day, mostly from Canada and Mexico.) [National Geographic, 2-6-2016]

Chandan Kumar Singh told BBC News in February that his recent lawsuit against the Hindu god Ram was provoked by Ram's mistreatment of his wife in spiritual lore. Said Singh, "(W)e cannot talk about respecting women in modern day India when we know that one of our most revered gods did not treat his own wife with respect." Singh thus wants a court to tell the god to acknowledge he was wrong. (2) After news reports of a male Siberian tiger being playful with a male goat (ordinarily, a tiger's meal) in a Russian safari park, lawyer Alexei Krestyanov pressured the local prosecutor in February to embargo further announcements, claiming that such coverage harmed children by provoking "interest in non-traditional sexual relations." [BBC News, 2-8-2016] [The Guardian (London), 2-5-2016]

Police in Austin, Texas, said in February they had received several complaints (KEYE-TV reported "dozens") from women about a man who approaches them in public genially, but then turns aggressive and tries to stomp their feet (in one case, telling the woman it was "normal" behavior for him). (The suspect apparently has only little in common with the Arkansas recidivist who holds the record for multiple appearances in News of the Weird — who merely fondles and sucks women's toes, although without their consent and sometimes after forcefully grabbing the foot.) [KEYE-TV (Austin), 2-5-2016]

A News of the Weird Classic (September 2011)

FUBAR: Retired U.S. Army Sergeant Major Rob Dickerson finally received his Purple Heart this summer (2011), four years after he was seriously wounded in a rocket attack in Iraq and two years after he began a back-and-forth paperwork battle with the Army to "prove" he was injured. Recently, the Army had apologized and mailed him the award, but it arrived C.O.D., leaving Dickerson to pay the $21 fee. (The Army subsequently reimbursed Dickerson, but Dickerson said he hasn't been able to cash the check, in that it was somehow made out to "Roy Dirksen.") [KELO-TV (Sioux Falls, S.D.), 8-4-2011]