The Dysmorphia lead singer dishes on life in an all-woman band and how music can empower people. 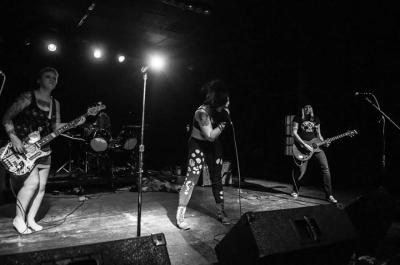 Personal expression is power. If you need an example of that, look to Erie's Dysmorphia for inspiration. The riot-punk quartet named after body dysmorphic disorder plays to not only rock, but also act as an example to help empower women and other individuals that you shouldn't be ashamed of who you are.

So who are they? Dysmorphia is made up of Brit "Britches" Soule on lead vocals, Kristen "Troll" Besseti (soon to be Neilsen - congratulations!) on bass, Jessica "Jess-X" King on guitar, and Suki "Alex" Smith on drums. The band recently dropped a new demo, which you can hear on ReverbNation, and has a few notable gigs in the future, so I caught up with Britches to talk about the band and the role empowerment plays in the quartet's music.

Alex Bieler: How has life been with the band?

Brit "Britches" Soule: Enlightening. I didn't think that I would be able to get along with a group of chicks as well as we do. I've seen in other groups of women or even in other bands with guys, there's so much politics that it's just ridiculous. With Dysmorphia, even if someone has an idea that doesn't seem like it's all the way there or it's not the consensus, we'll still take it and try and work together to develop it instead of putting it down. That's pretty cool.

It's such a diverse group of women coming together, too. Our guitarist is a high school fitness and wellness teacher who is also straight edge with a strong Christian value. And then to have me, who's more of an atheist, edgy, in-your-face about every opinion I have, and not straight edge, it's a very interesting dynamic because we're both very strong personalities, but I think without her influence, we would have gotten into a lot more trouble. I consider her the band mom.

It's really cool what Troll has been doing, as far as all of the stuff with Rebel Girl Radio [on Penn State Erie, the Behrend College's BVZ Radio] and how much she handles on a day-to-day basis. I mean, she has two jobs and a household and going to school. I don't know how she's doing it.

AB: So why did the band settle on the name Dysmorphia?

BS: We went through a whole bunch of different things. We wanted it to be conveyed that we were women and that we had a message. We had so many things that had to do with vagina references, but one day Troll just said "What do you think about Dysmorphia" because we had been talking about how much body shame comes with being a woman in America and in the world. People even asking the question "Why Dysmorphia?" gives way to conversation about it, so I'll get up there and drum on my belly and shake my bingo flaps and make it okay.

AB: What is that experience like, being able to go on stage and express yourself however you want and playing the music you want?

BS: Crazy, crazy empowering. Honestly, the first couple times it happened, I was nervous as hell going up there in almost nothing, but once I walked out, I didn't have a choice to run away. I had to face it. Actually, being with this band has helped me deal with my own body issues a lot.

AB: How do you feel about being listed off as an all-female band? Is it something that you're proud of or do you think that it's something that shouldn't be labeled as a minority genre?

BS: I think it [matters], for the sheer fact that women can come together and get along well enough to make something like that and show that it can be made. Instead of just having one woman represented in a band, we can do it on our own. Not to downplay any roles, but it's ridiculous – and I thought about this the other day – but I consider myself a punk and into punk music for at the last 12 years of my life, but I didn't find out what a riot grrrl was until last year.

BS: I had no idea. That makes me wonder that even with the way that I see out music, how much harder it is for some other person to know that you can go on Spotify and look up these all-women bands with the same kind of messages and they have maybe 300 or 400 followers. It's insane; it just makes me want to push it further – and louder.

AB: I always find it interesting that people have a tendency to compare female artists to other females artists as opposed to just similar bands in general.

BS: When we played our very first show, I got off stage and the one guy from Oh No! It's Mustard Gas said "Man, you would have made Kathleen Hanna proud," and I was just happy that he knew who Kathleen Hanna was, because a lot of people would have had no clue and I really want them to.

AB: When it comes to Dysmorphia's music, have you found yourself taking it in different directions?

BS: Initially, we started with an extremely political message and an extremely feminist message, and it was really thrashy and jazzy at the same time. We were really just feeling it out. Now that we've had a chance to record our five-song demo that's 10 minutes and 30 seconds long, we're moving a little more experimentally and taking in influences from other all-female bands and just other band that have the same ideals and seeing what they've done. It's cool to incorporate some things – not all of them, obviously – and just play around with the music.

AB: Has that basically been a product of the band just gelling after a while?

AB: You don't hear acoustic too much with something described as "thrashy."

BS: Right, so it's weird that I never labeled any of my music as a genre, but people started listing me on flyers as "acoustic punk."

BS: They're like "she's playing an acoustic instrument and she's yelling and there are messages there, so it makes sense."

Want to see Dysmorphia play live? Check them out at these upcoming shows.