A Duke study shows why fracking's biggest environmental hazard is its wastewater. 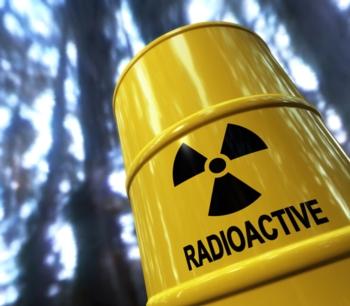 Smithsonian tells of a group of Duke scientists who recently tested the waters downstream of a Pennsylvania waste treatment plant that handled fracking wastewater and found that the water had been contaminated:

Their analyses, made on water samples collected repeatedly over the course of two years, were even more concerning than we'd feared. As published today in the journal Environmental Science and Technology, they found high concentrations of the element radium, a highly radioactive substance. The concentrations were roughly 200 times higher than background levels. In addition, amounts of chloride and bromide in the water were two to ten times greater than normal.

"Even if, today, you completely stopped disposal of the wastewater," Vengosh says, there's enough contamination built up that"you'd still end up with a place that the U.S. would consider a radioactive waste site"...

This new work confirms that suspicion for at least one plant—which as about an hour east of Pittsburgh, and releases effluent into the watershed that supplies the city's drinking water—and Vengosh believes that the findings would likely be similar for many of the other facilities in Pennsylvania. Especially concerning is the fact that, apart from in the water, the team found high levels of radioactivity accumulating on the sediments at the bottom of the stream over time. Radium has a half-life of 1600 years, so unless these sediments are removed, they'll keep releasing radiation into the water for an extremely long period.

In addition, the high levels of bromide found in the wastewater is a concern, because even in slight quantities, the compound can trigger the formation of a toxic class of chemicals called halomethanes when it's combined with chlorine. This is a problem because in rural areas, many residents treat well water by chlorinating it.

This should as a stark reminder that likely the biggest environmental threat posed by fracking isn't fracking chemicals or the process itself, or even the danger of methane migration posed by drilling, but fracking's wastewater, the toxic brew of heavy metals and radioactive material that are naturally occurring and leach into the water used and fracking and typically resurfaces after a frack.

Here, there are two primary culprits for why the researchers found radioactive wastewater in a Pennsylvania river. The first is that most of the state's wastewater treatment plants are unable to properly clean fracking wastewater. The second is that state and federal regulations do not realistically address the real hazards of fracking wastewater. Remember, essentially the same story was broken about radioactivity and Pittsburgh's water supply back in 2011. At that time, the Pennsylvania Department of Environmental Protection (DEP) asked frackers to stop using conventional treatment plants that discharge into rivers, voluntarily.

Even frackers who have complied with the DEP's request find difficult choices. An alternative to bringing it to a wastewater treatment plant is to haul it to Ohio and have it sequestered underground. But that comes with risks, too – geologic instability and uncertainty about the long-term viability of sequestration. And Ohio isn't thrilled about being a toxic waste dump for the fracking industry.

...[T]here are better methods of treating fracking wastewater (he points to the plants operated by Eureka Resources as a model for adequately removing radioactivity), but these are more expensive to operate. But currently, without the push of federal regulations, companies looking to dispose of wastewater have no incentive to pay for this type of solution.

The samples taken by the Duke researchers were taken from the stream as late as 2012, so it's apparent that the DEP's self-policing policy isn't all that successful. And regualtors on the state and federal level also show a tendency to favor frackers in considering suspected cases of water contamination by frackers. Blame underfunding, blame corrupt reglators, blame economic pressure, but our regulatory agencies do not appear to be adequately representing the citizenry.

Me, in the fracking cover:

If fracking really is as clean and safe as its advocates claim, why the need for, say, the industry's exemption from the Clean Water Act? In 2005, the Bush administration inserted a provision into the federal Energy Policy Act that exempted gas drilling from federal regulations governing injection wells. Likewise, the oil and gas industry and gas drilling received exemptions or special treatment under a number of other federal regulations, including CERCLA, RCRA, SDWA – letters that denote laws regulating drinking water, hazardous waste, and liability for the cleanup of toxic sites.

Also, many frackers are allowed to keep the chemicals they use a secret. Citing that the composition of the fracking fluid is a trade secret, extraction companies are allowed by OSHA, the federal agency that polices work conditions, to not disclose a number of chemicals used in the fracking process.

I'm no anti-fracking zealot. I suspect, with proper regulations and oversight, fracking could provide the world with cheap natural gas without necessarily impacting the environment or endangering human health. Frackers should want effective oversight, too: it would mean better relations with the public, and the more careful and environmentally-conscious wouldn't have to cede a financial advantage to the less.

But we're not there yet, and won't  be under the current political and regulatory climate.