After half a year, A.V. Undercover finally came to a close, leading Arts and Culture Editor Alex Bieler to rank this season's crop of 30 songs. 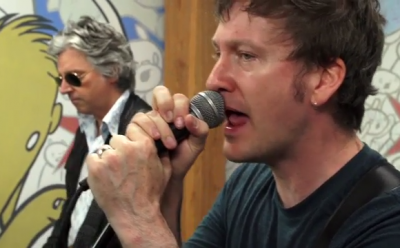 For the past six months, the lovely folks at The A.V. Club have been providing with some choice cover songs through its regular series A.V. Undercover. The latest season wrapped up this week - not including the upcoming holiday covers, of course - after 30 bands provided new takes on tunes by acts ranging from the Mountain Goats to Arrested Development. Given that it's list season, I've decided to rank all 30 covers from worst to first, sitting through numerous Geico ads to judge every one on things like sound quality to fun factor. Enjoy.

This cover was like a sloppy cover you would do with some friends in your parent's basement. Even more, the changes to the lyrics were just annoying.

A near note-for-note cover of a good song that still feels watered-down from the original? Yeah, not so great, New Politics.

The lack of bass really hurts this cover. Even apart from that, it's a pretty uninspired, note-for note cover, and it's going to take much more exciting than this to make something that faithful sick out.

To quote A.V. Club commenter Mr. Timbre-ine Man, "Well, they made it their own, at least. Now let us never speak of this again." A bit harsh, but not too far off for this snoozefest.

Owen's Mike Kinsella is usually pretty stellar at covers, but his vocals really sink this cover despite his assertion that he can sing it in the intro. Stick with this older A.V. Undercover track if you're looking for some cool Kinsella magic.

Not a bad job, but the song seems to build up without every really going anywhere, which is a shame for the PJ Harvey song.

The vocals are a bit off in this one, particularly in the falsetto bit, but their enthusiasm does make this cover a bit more fun.

At best, I understood half of what Lou Barlow is singing in this cover, so that's definitely a big minus. The rest of the cover sounds pretty cool, though.

The keys on this cover were pretty fun, but Damian Kulash's vocal performance seems awful sleepy. This one could have used a bit more energy.

This was a tricky one to rank, since Trampled By Turtles offer up a pretty cool deprture from the prog rockers' original track, but then lead singer Dave Simonett really struggled with the high notes. I'll give it a bump over OK Go since the band went for something different.

This cover is like driving thorugh the desert for a well, where you start to wonder if the scenery is going to change; It's awful pretty, but then it just, well, lingers.

A bit too faithful to the souce material for my tastes, but Courtney Barnett sure does The Breeders justice on this entry.

Once again, pretty faithful to the original, but they sure do seem like they're having a lot of fun with it. Also, is it just me or does the basist look like he's wearing his dad's flannel?

Pretty nice job on a song that the band didn't know at all. It seems like singer Michael Ford, Jr. tried to emulate Jarvis Cocker a bit too much, but it still works.

In a season that featured a notable amount of shay vocals, Jenn Wasner sounded as good as always. Still, this is probably Wye Oak's weakest entry in their notable A.V. Undercover career, which includes this gem. Of course, by weakest, I mean it's pretty damn solid.

It might be be for everyone, but I dig what Wild Cub does with this Beyonce track, particularly the guitar work and how much Keegan DeWitt commits to the vocals.

Well, that' sure is a departure from the original. It was sloppy at times, but Braid sure made this cover a lot of fun.

Pretty good job all around with Eagulls taking on fellow Brit band The Stone Roses. Bonus points to this cover since the guitarist used a battery-run hand fan to play guitar.

Bands that go on A.V. Undercover tend to quiet things down, so it's always nice when a band gets louder on those covers. PUP does just that and even throws a quick Rush tribute in at the end.

This is a pretty faithful rendition of the original besides Ian McCulloch's, but man do they nail that chorus.

This might have been the biggest surprise of the bunch, and in a good way. The Kings of Leon-like band took a Southern hip-hop staple and turned it into a rather fun, breezy Southern rock tune.

This was another tricky one to rank, because I love what they did with the song, but it almost sounds like the singer is in pain. It's "rawk" enough to not hurt the cover too much, but I can't go much higher than this.

Who knew that "I Need a Lover" was so hard? Still, Hamilton Leithauser and company pull off the John Cougar hit really well.

I really liked this shoegazey take on "In a Big Country." Also, songs that have A.V. Club staffers contribute tend to be pretty good.

This was one of the most divisive covers for A.V. Club commenters, mainly because of Sean Bonnette's herky-jerky performance. I think this is a really fun, different take on "Plush," so to quote the song itself, "I feel it."

I'm so happy GWAR was the band that covered Pet Shop Boys. As usual, they rock it, even adding in The Jim Carroll Band's "People Who Died" at the end in a touching tribute to deceased frontman Dave Brockie.

I was hoping Modest Mouse would come in and cover "Dance Hall Days" after Wang Chung did an awesome rendition of "Third Planet," but Ben Watt and Bernard Butler sure do a really lovely job reworking the '80s hit.

Nathaniel Rateliff wasn't supposed to be the one who covered this song, but someone else had to cancel. That's good for us, because Rateliff and his band gave Undercover an awesome cover of "The Best Ever Death Metal Band Out of Denton." Hail Satan!

This is probably the most fun cover of the year, for reasons that I documented in this blog post. Strand of Oaks commit to this entry and I love the band all the more for it.

This was a tough choice. You couldn;t really go wrong with any of the top five covers for No. 1, but if I had to pick just one song to listen to out of the bunch, it would be Split Single's take on "Wolf Like Me." Man, does this cover rock.

Overall, it was a pretty solid season of A.V. Undercover. Now let's hope that The A.V. Club crew can convince Isaac Brock to cover an Everything But the Girl song during the next season.