The top line of Meghan Agosta, Christie Cicero and Jesse Scanzano combined for four goals and 10 points as the Lakers took care of Brown University 6-0 at the Tullio Arena. 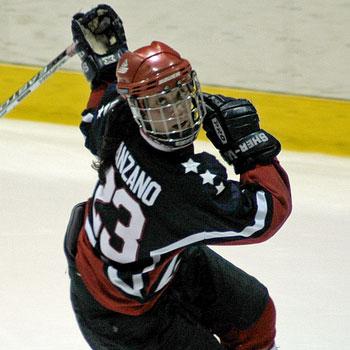 If Friday afternoon's contest against Brown University is any indication, the No. 5 Mercyhurst College women's hockey team feels right at home at the Tullio Arena – the site for this year's NCAA Women's Frozen Four.

The duo of Meghan Agosta and Jesse Scanzano spearheaded an offensive attack that generated 58 shots and spent the majority of the 60 minutes in the Bears' zone en route to a 6-0 victory.

"It's definitely the best offensive chemistry I've seen as a team since I've been here," said Scanzano, who collected two goals and two assist and became the third person in the programs history to record 200 career points. "It just keeps getting better every game."

In its second of three games at the Tullio Arena, Mercyhurst appeared to feel more comfortable on the ice it hopes to be skating on come March in the Frozen Four.

"Our first game playing here, we didn't play our best as a team," said Agosta, referring to a 4-2 victory against Colgate University on Nov. 27. "An arena is an arena. When you get out there, it doesn't matter what the ice is like or anything, you got to play because you want to win. That's what it comes down to."

Agosta set the tone early for the Lakers (18-4-0), as she deposited her team-leading 23rd goal of the season past Brown goaltender Katie Jamieson 6 minutes, 57 seconds into the contest. Jamieson stopped 52-of-58 shots in the game.

Holding the Bears to just four shots in the opening frame, the Lakers' offense swarmed the Brown end, firing shot after shot and controlling the stream of play. Christie Cicero beat Jamieson with her sixth goal of the season at 16:47 to end the one-sided period.

The top line of Agosta, Scanzano and Cicero combined for four goals and 10 points. In all, six different Lakers recorded at least one point.

"The more depth you have, the more weapons you have to wear down the other team," coach Mike Sisti said. "Goals are momentum, and when we are full strength, we feel we can get a goal any time from any player."

Scanzano recorded the first of her two goals to start the second, while alternate captain Vicki Bendus also beat Jamison to make it 4-0 Lakers heading into the final period. Mercyhurst put 27 shots on net in the second, while holding Brown (2-12-3) to just six.

In the early stages of the third, Scanzano wrote her name in the Mercyhurst record book, as her goal at 3:27 gave her 200 career points, making her the third Laker in program history to accomplish the feat. Agosta and Valerie Chouinard (2005-08) are the other members of the 200 point club.

Agosta would put the finishing touches on the rout, as she beat Jamieson at the 12:20 mark off a beautiful backdoor pass from Scanzano.

Mercyhurst goaltender Hillary Pattenden stopped all 16 shots she faced between the pipes, earning her 16th win of the season.

Goals and shots have been hard to come by for the Lakers' opponents the last three games, as they have held their opponents to 16 shots in each of the games, while not allowing a goal in the last 131:42.

"We've been working very hard on (defense)," said Sisti, who is one win shy of 300 in his career at Mercyhurst. "That's going to be the big key to our success. We just have to keep getting better and better at it."

Mercyhurst will conclude its Tullio Arena schedule tomorrow afternoon against the Bears at 2 p.m..