Representative Joe Pitts called together his Health subcommittee of the House committee on Energy and Commerce to blast the Obama administration standard to mandate that insurers cover contraceptives without co-pay or deductible. Pitts isn't happy. Jay Stevens has something to say about the whole matter.

by Jay Stevens
View ProfileFacebookTwitterGoogle+RSS Feed
November 10, 2011 at 9:00 AM 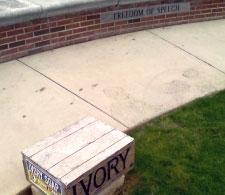 Recently, Representative Joe Pitts – Republican representative of Pennsylvania's 16th district, which spans all of Lancaster county and parts of Berks and Chester counties – called together his Health subcommittee of the House committee on Energy and Commerce to blast the Obama administration standard to mandate that insurers cover contraceptives without co-pay or deductible.

Why? Pitts isn't happy with the present exemption for churches and religious organizations that might object to providing coverage for birth control. Instead, he wants to expand it to employees of all Catholic-affiliated organizations, like schools, universities, and hospitals – many employees of which aren't Catholic.

But that's assuming Catholics are behind Pitts' proposal. According to the group Catholics for Choice's testimony at Pitts' hearing, 98 percent of sexually active Catholic women have used contraceptives.

Which makes sense. After all, deciding when – and whether – to have children is one of the most important and fundamental acts of self-expression that a woman has. Not to mention that pregnancy and childbirth are enormous health risks for a woman. In short, birth control is essential to a woman's health and self-identity, and placing the state between a woman and her health seems...bad.

But this isn't Joe Pitts' first flirtation with policy that's potentially harmful to women. Just a few weeks ago the Pennsylvanian introduced legislation – the "Protect Life" Act – that would forbid women buying insurance that covers abortion through health insurance exchanges, and would allow hospitals and care providers to deny women abortions even in life-threatening situations. Apparently women shouldn't be entrusted to spend their money as they like, or receive life-saving care if it conflicts with Pitts' particular form of ideology.

But then it doesn't appear Pitts is necessarily working in the best interest of his constituents. At least, not the ones who vote for him.

Basically, Pitts, in these bills and others, is running errands for the U.S. Conference of Catholic Bishops, a group as a religious organization able to hide behind its tax-exempt status and keep the extent of its lobbying efforts secret. Still, according to a Huffington Post report, a Conference official – Richard Doerflinger – admitted to helping Bart Stupak (D-MI) and Pitts draft the contentious anti-abortion amendment (with Kathy Dahlkemper's support) that nearly upended the healthcare reform bill, as well as admitted to having "some input" into Pitts' Protect Life Act and to helping architect the sweeping religious exemptions for health care coverage.

Pitts was also a leading character in Jeff Sharlet's expos? of a secretive cell of religiously inspired politicians and policy-makers called "The Family." Members of the family – which includes a number other Representatives, Senators, and Pentagon and Department of Defense staffers – "desire to see a leadership led by God," at least according to the group's mission statement, to do work that "advanc[es] His Kingdom." According to Sharlet, The Family – with Joe Pitts at its wheel – has worked behind the scenes to steer policy for decades against abortion and other women's rights.

Pitts is along on a collective messianic spiritual quest to bring about God's Kingdom. The rest of us, apparently, just should get out of his way, no matter the cost to our health or personal beliefs.