The Erie Otters moved above .500 for the first time in 2011 with a 4-2 win Wednesday night over Eastern Conference foe Niagara. 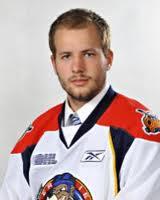 Finally, one found the back of the cage.

Szydlowski rifled a wrist shot past Niagara's Dalton McGrath for the game-winning power-play goal in a 4-2 victory to put the Otters above .500 at for the first time in 2011.

"I had a few shots blocked tonight," said Szydlowski, who is second on the team with 34 points. "A couple others I should have got to the net. Luckily, I came back out and put one past (McGrath)."

Dating back to the preseason, Erie (19-18-1-1) had lost four straight to the IceDogs, who are second in the Central Division with 23 wins and 50 points.

Greg McKegg got the Otters on the board 7 minutes, 32 seconds into the game as he collected a mishandled puck inside the Niagara blue line, was able to corral the puck and flip a backhander over McGrath's shoulder for his team-leading 26th goal of the season.

From there, the game shifted to a defensive struggle, as both teams couldn't find a rhythm on offense and struggled to sustain pressure in the offensive zone.

It appeared the Otters would take a 1-0 lead into the final period, as the defensive unit held Niagara (23-10-2-2) at bay for the majority of the second period by blocking shots and clearing the lanes so goaltender Ramis Sadikov, making his 29th consecutive start in net, could make easy saves.

But a  puck thrown from the side of the net by Ryan Strome bounced around before Freddie Hamilton finally shoved the loose debris into the back of the net to make it 1-1 heading into the final 20 minutes.

In the deciding frame, the 2, 712 fans were greeted with a flash of offense – McKegg scored his second of the game at 6:39 to give Erie a 2-1 lead, just to see it erased two minutes by Strome's breakaway goal to once again put the game in a deadlock.

Going back-and-forth, the team's traded chance after chance before Phil Varone was dragged down by Luke Mercer, which led to a holding penalty and gave Erie its third power play opportunity of the game.

In the previous two, Erie worked the puck well and found quality scoring chances, but McGrath stood tall in net and was the IceDogs best penalty killer.

"The power play early on was going very well," coach Robbie Ftorek said. "We weren't scoring, but we were having good chances. We said between periods, 'we may not score tonight, but we're going to get something eventually because it's flowing.'"

His team made him a liar on Mercer's penalty.

On a sweet display of passing, Derek Holden fed the puck to Varone, who quickly found Szydlowski, who had an open net to put Erie ahead for good.

"He's a pretty tough guy," McKegg said of Szydlowski. "He's got cannon, so I don't think he's going to miss that shot. It was nice for him to get that one for sure."

David Broll put the final nail in the IceDogs' coffin just over three minutes later as he batted home a rebound from the side of the cage to put the finishing touches on a hard-fought win, who moved from eighth place in the Western Conference to a tie for fifth.

"I thought it was a really good effort from both teams," Ftorek said. "It was a good 60 minutes, and I think we capitalized on our opportunities."

The Otters will hit the road for a showdown with division rival Kitchener, who are eight points ahead of Erie in the MidWest Division, Friday evening, before returning home to host Doug Gilmour's Kingston Frontenacs Saturday night.