Writer Alex Bieler and Managing Editor Ben Speggen went to Munhall, Pa., to see the Mountain Goats in concert and came back pleased with the results.

by Alex Bieler
View ProfileFacebookTwitterInstagramGoogle+RSS Feed
June 15, 2013 at 10:30 AM 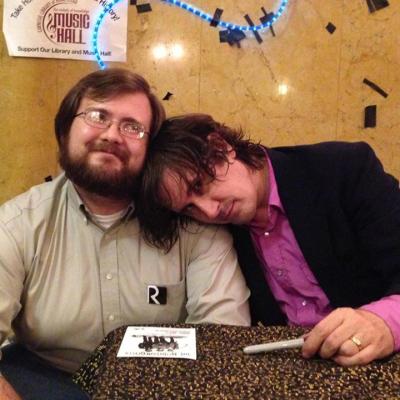 On a sunny Tuesday, Managing Editor Ben Speggen and I packed ourselves in my comrade's Subaru and began a two-hour trip down I-79. Our destination: Munhall, Pa., home of the Carnegie Library Music Hall, a place where the Mountain Goats were set to play on that eventful June 11 day. (Seriously, the Mountain Goats, Black Flag, The National, Dirty Projectors, and Alt-J were all playing on the same day. Someone should tell these bands to spread the weekday love.)

As you faithful Reader readers may remember, I had a chance to chat with John Darnielle, the man behind the Mountain Goats, not too long ago. Well, after speaking with him, it just seemed rude not to venture down and see him on his current duo tour.

After an enjoyable opening set by Denton, Texas band The Baptist Generals, the crowd dispersed for bathroom breaks, $5 Yuenglings, and other leg-stretching opportunities. Soon, Darnielle and bassist Peter Hughes took the Carnegie stage.

Apart from a pair of girls that decided that sitting was not an option, the show started off quite well, with the duo mixing up their set list with songs new and old, ranging from 1994's "Song for Mark and Joel" off of the "Beautiful Rat Sunset" EP to a trio of tracks from latest full-length release "Transcendental Youth."

For a man that's been playing as the Mountain Goats for over two decades, Darnielle was as comfortable as you'd expect the hard-working songwriter to be, with Hughes bopping along as they pumped out 20 tunes over the course of the night. Darnielle was chatty throughout the night, telling stories about individual songs, his love of Pittsburgh, and a particularly amusing tale of the absence of a particular piece of pink tape that caused him to play a wrong chord in "Woke Up New."

Longtime fans were pleased by unexpected nuggets ("Cobscook Bay," "Alpha Chum Gatherer") while with less of an intimate knowledge of the Mountain Goats large discography heard enough familiar tracks to not feel uncomfortable ("Cry For Judas," a particularly rousing "Heretic Pride"). Darnielle even asked the crowd for requests, leaving one girl quite pleased when he started strumming out "San Bernardino."

The highlight of the night came at the end of the show, as Darnielle decided to play his only cover of the night, whipping out Ace of Base's "The Sign." Not done quite yet, Darnielle debated between dipping deep into his catalog before closing the show with "No Children." The tune off of 2002's "Tallahassee" incited the whole crowd into a sing-along, with old fans and new crying out "I hope you die/I hope we both die" as the show came to a close, with fans leaving Carnegie Library Music Hall feeling even more alive than they did when they arrived.

the Mountain Goats // In League With Dragons

by Nick Warren5/8/2019, 9:15 AM
Despite what that title alludes to, this tMG record doesn't have the magic of previous releases.

by Nick Warren5/24/2017, 12:00 AM
The strength of the Mountain Goats will always rest solely on the shoulders of John Darnielle. His brilliant lyricism and idiosyncratic vocal delivery tells a story like no other living person can.