Isn't it funny how the media circles the wagons around the government when we're about to bomb somebody? And...wait! Miley Cyrus did what at the VMAs? 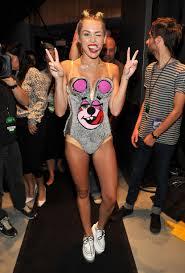 So, as I was listening to NPR's drumbeat for bombing Syria yesterday morning, I was reminded of the media "coverage" of the invasion of Iraq. You know what I mean: lots of talking heads analyzing the situation (invariably advocating for action), little actual informing or reporting.

There wasn't much information about, you know, what a mess Syria is. Or what bombing the country might mean. U.S. Syrian policy isn't helping; apparently, we're arming and training rebels who were the same folks we fought against in Iraq and Afghanistan.

Whatever. George Packer does this better than I do:

So you want us to get involved in their civil war.

I'm not saying that.

But that's what we'll be doing. Intervening on the rebel side, tipping the balance in their favor.

Not necessarily. We'll be drawing a line that says dictators don't get to use W.M.D.s without consequences.

You can't bomb targets on one side of a civil war without helping the other side.

It would be very temporary. We'd send Assad a clear message, and then we'd step back and let them go on fighting. We're not getting involved any deeper than that, because I know what you're going to say—

The rebels are a bunch of infighting, disorganized, jihadist thugs, and we can't trust any of them.

But then Miley Cyrus twerked, and people went crazy. And there was, of course, ABC News' "scientific explanation" of twerking...

There is, on the other hand, some scientific basis for wagging the dog – things like VMA dance performances do distract from more serious issues like...erm...what was it we were talking about?

Over the years, CNN.com has become a news website that many people turn to for top-notch reporting. Every day it is visited by millions of people, all of whom rely on "The Worldwide Leader in News"—that's our slogan—for the most crucial, up-to-date information on current events. So, you may ask, why was this morning's top story, a spot usually given to the most important foreign or domestic news of the day, headlined "Miley Cyrus Did What???" and accompanied by the subhead "Twerks, stuns at VMAs"?

It's a good question. And the answer is pretty simple. It was an attempt to get you to click on CNN.com so that we could drive up our web traffic, which in turn would allow us to increase our advertising revenue.

Miley Cyrus // She is Coming EP