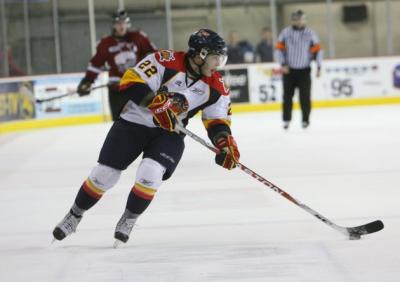 It's been three weeks of adjustments for Brett Thompson since he joined the Erie Otters at the January trade deadline.

Playing on a new team in a new country, a new system to learn, and the hardest of all, learning how to play the wing position for the first time in his career.

He appears to be adapting well to all four.
Thompson scored the game-winning goal 5 minutes, 25 seconds into the second period and added an empty netter late in the third to propel the Otters to a 5-3 victory over the Sault Ste. Marie Greyhounds Friday night in front of 3,229 at the Tullio Arena.
"I never played the wing in my life," said Thompson, whose empty net goal gave the former Greyhound his second consecutive 30-goal season. Thompson, who played 133 games in the Soo, finished last season with 42 goals.
"I'm kind of getting used to it. I feel a lot more comfortable every game."

Thompson was traded to Erie Jan.10 in exchange for David Broll. Broll did not record a point in his first game against his old team.

With beginning the night in eighth place in the Western Conference standings, thanks impart to losing consecutive games to Midwest Division power Owen Sound last weekend, the Otters needed to come out of the gates strong and secure a win against the lowly Greyhounds, who sit in last place in the conference with just 16 wins.

Erie built a 4-0 lead, three of which came in a 4:24 span in the second period with goals from David Shields, Shawn Szydlowski and Thompson. Anthony Luciani began the scoring barrage with the only goal in the first period.

He finished the game with four assists.
"Things are going well for me," Varone said. "It's just a couple of games. Hopefully I can take it into the playoffs, because that's when it really matters."

Thompson's goal sent the Soo's Matt Murray to the showers early, as he allowed four goals on just 12 shots.

For the first 30 minutes, the Otters looked like the playoff contender that they are expected to be this season. They controlled the Greyhounds in their offensive zone, created chances in their defensive zone and generated quality scoring chances. The Greyhounds were overwhelmed.

In all, seven different Otters recorded at least one point in what seemed to be another easy victory at home, where the Otters are 14-9-0-1 this season. The second period outburst shouldn't have been a surprise either, as the Otters scored 76 goals in the middle frame prior to this contest.

But as coach Robbie Ftorek has preached to his club all season, it takes 60 minutes of effort to collect wins in this league. And once again, his team began to prove his point.

Vern Cooper's goal at the 11 minute mark of the second period erupted the Soo offense, as it scored three straight goals to turn a Otters' blowout into a 4-3 nail biter with 5:55 left in the game. "We chose not to play 60 minutes," Ftorek said. "The Soo plays hard every shift. They compete and battle. We just have to learn to play for 60 minutes."

The Greyhounds sustained pressure in the Otters' zone and peppered Ramis Sadikov with several challenging shots with the extra attacker. Sadikov finished the game with 27 saves.

The best opportunity came from Broll, who found himself open at the high slot, but his shot sailed over the crossbar.

Moments later, Thompson was putting the final touches on a game that spiraled out of control for the Otters. "Our intensity kind of dropped a bit," Varone said. "At the start of the second, we blew it open, and for whatever reason we thought we didn't have to score goals anymore. We have to understand that every game is a tight one, especially for us, so we need to get wins, and the more goals we score, it's going to be better for us."

With Guelph having the night off, the Otters moved into seventh place in the Western Conference with 54 points, trailing sixth-place London by two points and fifth-place Windsor five points.

Erie can cut the deficit to three as it will play host to the Spitfires for the teams 1,000 game, slated for a 7 p.m. start.

Former Otters Sean Courtney, TJ Aceti, Mike McKeown, Chris Berti, Steve Nimmigon and Brad Yeo will all make a trip back to the Tullio Arena to celebrate the festivities.

Courtney scored the infamous goal in overtime of Game 5 of the OHL Finals May 10, 2002 to give the Otters their first and only OHL Championship.