What Yellow Phase Means For You 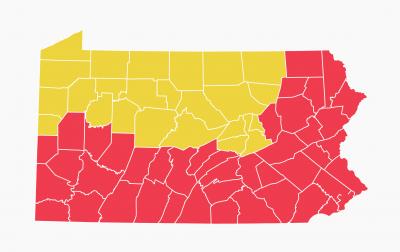 It's hard to call this yellow mellow — not with so many questions and so much confusion. On Friday, Erie County enters the Yellow Phase in Governor Tom Wolf's plan for reopening Pennsylvania — but most of us still aren't entirely sure what that means. While it is a permission to take a step forward, how big is that step allowed to be?

Let's take a moment to address some of the plan's perplexities.

What is the "Yellow Phase?"

The Yellow Phase is the intermediate stage of Gov. Wolf's county-by-county reopening plan, marked as "Aggressive Mitigation." While stay-at-home orders will be lifted and certain businesses can resume operations, it's not a license to throw caution to the wind. Anyone out and about should be just as mindful of others as they (hopefully) have been, wearing a mask in public areas, practicing frequent hand washing (or failing that, sanitization), and maintaining a 6-foot buffer between themselves and anyone who doesn't live with them.

by Nick Warren4/22/2020, 8:35 PM
Governor Tom Wolf cited northwest and north-central PA as the two first regions to move into the next phase

Which counties are entering the Yellow Phase?

As of Friday, May 8, the following 24 counties will enter the Yellow Phase: Bradford, Cameron, Centre, Clarion, Clearfield, Clinton, Crawford, Elk, Erie, Forest, Jefferson, Lawrence, Lycoming, McKean, Mercer, Montour, Northumberland, Potter, Snyder, Sullivan, Tioga, Union, Venango, and Warren. Collectively, these counties comprise just 12 percent of the state's population — Erie being the most populous. In these areas, incidence rates of COVID-19 were at 50 cases or fewer per 100,000 people over a two-week period — a key approval metric for reopening.

On May 8, 24 counties will reopen — moving from the red phase of #COVID19 response to the yellow phase.

✅ More businesses can open with safety guidance in place
🏡 Telework must continue where possible
😷 Residents should social distance + wear masks to avoid an outbreak pic.twitter.com/J5zMLExati

Who gets to reopen during the Yellow Phase?

Retailers, manufacturing plants, and offices that did not qualify for the administration's list of  "essential" or "life-sustaining" businesses who were ordered to close in mid-March. This is in addition to the reopening of outdoor recreational facilities like private campgrounds, marinas, and golf courses on May 1 (as well as construction sites). The verdict remains out on places like libraries and the Millcreek Mall (retail, but also a locale known for drawing crowds, including out-of-towners).

As guidelines from the state became more and more delayed, the differences seemed stark compared to the March 19 order for all non-life-sustaining businesses to be shut down. All at once, the public received a detailed, five-page listing of different types of businesses. No such document was made readily available for the reopening process (view the official guidance here).

by Nick Warren3/19/2020, 6:10 PM
In order to halt the spread of COVID-19 dramatically widens the scope of business closures.

Receiving additional guidelines from the state, Dahlkemper noted that the following industries may recommence operations on May 8, while following social distancing and masking protocol:

All organized outdoor sports are not permitted (such as little leagues, etc.). Garage sales will be permitted, though "event" type sales, and large neighborhood sales should be avoided.

Who stays closed during the Yellow Phase?

For those allowed to reopen, what are the stipulations?

If you're reopening a physical place of retail:

If you're reopening an office or other place of work:

Is there any circumstance where a member of one of the disallowed categories could reopen in some capacity during the Yellow Phase?

Yes, and this is where things can get tricky. One example Erie County Executive Kathy Dahlkemper offered in her Tuesday press briefing was hair salons not being permitted to cut hair, but being permitted to sell products (thus falling under the umbrella of "retailer"). Although golf courses have been allowed to reopen, it was to be for walking only — now it is okay to rent a golf cart, so long as it's not being shared with someone you don't live with.

"The guidelines were nowhere near as specific as we had hoped, we still have many, many questions and we're trying to get answers to those," Dahlkemper lamented, hoping they would arrive by Tuesday night. The lack of clarity was nothing new to her, as throughout the pandemic the county has "had to build this plane as we've started to fly it."

The county posed numerous questions to the state and is currently waiting further clarification.

Do any revisions to social distancing policy accompany Yellow Phase?

The language most open to interpretation is "no gatherings of more than 25 people." To most, that would equate to a decent-sized party (just in time for cookout season!)  But even then, you should still be wearing a mask and standing/seated six feet apart from those people.

In a business context, there is some haziness on whether that 25 includes just staff, or staff and clients, or is in any way influenced by square footage. These are but a few of the vagaries that the state has yet to clear up.

Are there any restrictions in place for travel to/from Red Phase counties?

Currently, no, a fact Dalhkemper calls "worrisome" with summer tourism season looming. The majority of Pennsylvania remains under a stay-at-home order, and the three larger nearby cities of Buffalo, Cleveland, and Pittsburgh have all dealt with much more serious outbreaks. It's incumbent on everyone to be aware of risks. Municipalities will be asked to help enforce limiting large gatherings in public spaces.

How long will Yellow Phase last? When can we expect a move to the Green Phase?

It remains to be seen — it will largely hinge on whether new positives continue to dwindle or we see a spike. Says Charlotte Berringer, director of Community Health Services at the Erie County Department of Health: "We expect to see a doubling or tripling of numbers." If the situation does end up unraveling in Erie County, there is a possibility we could actually revert to the Red Phase — a scary thought.

But if we are able to diligently adhere to the guidelines set forth, we may be seeing green sooner rather than later.

We will continue to update our readers on the latest information as we receive it.