Why Mad Max: Fury Road is the Summer Blockbuster You Deserve 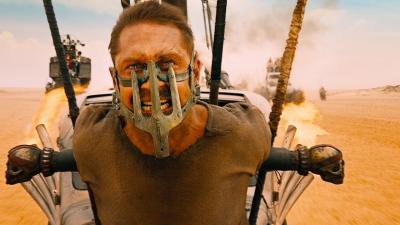 The wave of summer cinema is official here, and with its advent we've already been treated to the usual deluge of big-budget extravaganzas. And while the Marvel Cinematic Universe keeps pumping out superhero films like clockwork and Dwayne Johnson somehow keeps finding work, there's a real cinematic gem out there that audiences have largely overlooked. I'm talking of course about the critically-acclaimed Mad Max: Fury Road.

Yes, I said critically-acclaimed. Despite the fact that a lot of people seem to have missed Max's return to the big screen, critics have offered virtually nothing but praise for this explosive romp through the wasteland (we're talking about a 98 percent from Rotten Tomatoes and a solid 89 from Metacritic). But while that's all well and good we're not here to talk numbers; we're here to talk about exactly what it is that makes Fury Road so damn good.

For starters, Fury Road is actually a nonstop summer thrill ride, and while I'm sure you've heard that phrase a thousand times before, the pace of the film is absolutely relentless as it claims. If you've at least caught any of the trailers you might expect that a good portion of the action was used up to produce those minute long bits of bass and explosions, but you'd be wrong. The majority of footage that's been shown in trailers and teasers alike can all be attributed to the first major action sequence of the movie which takes up at least a solid twenty minutes of screentime. The film as a whole is a dead sprint to the finish that tactfully saves its best--and bloodiest--sequences for last. And along the way you can revel in the fact that the flick has a negligible amount of CG effects built in; nearly the entirety Fury Road is played out in breathtaking live-action stunts.

So yes, Fury Road is really exciting from start to finish, but that's only one reason it warrants your attention. The main draw of Fury Road--the one that has diehard Mad Max fans clamoring and newcomers in awe--is that it builds a brutally beautiful, convincing world that is completely sold by Tom Hardy's minimalist debut as Max, and Charlize Theron's show-stealing performance as Furiosa.

I call Hardy's performance minimalist here for good reason: for being the title character, Hardy has probably the least amount of dialogue in the movie. Despite this, Hardy's Max is expertly played as in the absence of trite quips and one-liners he's able to really nail just how mad the wasteland has made his character. From Mel Gibson's early portrayals of Max in the original film trilogy, Max is a man who has lost everything; his wife, has child, and his sanity for starters. Robbed of all that, Max was thrust into the wasteland where he has roamed aimlessly from place to place unwittingly helping those in need along the way.

But Max's story has always been one of survival at its core, and that truly comes across in Fury Road as Max spends about the first thirty minutes of the movie as a captive of the maniac motorheads who refer to themselves as War Boys. From the start, we watch our protagonist struggle to simply get by, and in this we're left room for Theron's Furiosa to take center stage.

You see, it turns out that Fury Road doesn't succeed purely on the merit of its title character, but rather on the emotionally compelling story of Imperator Furiosa as she makes a desperate and treacherous attempt to save the "wives" (five beautiful women imprisoned for the purpose of breeding) of the film's main antagonist from captivity. This is the driving (no pun intended) plot of Fury Road, and it's conducted with grace and style. The film is a homage to the post-apocalyptic fiction that the Mad Max movies laid the groundwork for, and while it's bursting at the seams with action, it delivers a refreshing take on what a summer blockbuster should really be. There's no love subplot here between Furiosa and Max, no definitive battle against some great evil, but rather a story built around survival, desperation, and at the very center of it all a woman's right to have control over her own body. With Theron's Furiosa and the rescue of the "wives" at the center of the movie, the film represents a departure from the typical tropes of male-centric action cinema that breathes new life into the genre.

Don't get me wrong, the movie as a whole is certainly brimming with machismo--what with the cars, and explosions, and Hardy's incessant grunting and pointing--but it's so much more than a mindless popcorn flick. And while you can choose to overlook the commentary offered by the film's thematic undertones in favor of just enjoying the thrill of watching DIY war-cars blow the hell out of each other, the movie actively invites you to immerse yourself in the wasteland, its characters, and their struggles.

Mad Max: Fury Road is a return to form for the action genre; a truly refreshing take on a classic formula that finds its roots in a rich post-apocalyptic landscape where life is tough and fuel is king. So if you haven't had the chance to catch the film yet, I'd suggest you get out there and do so before it's too late. Or you could just go see Age of Ultron again and ignore the fact that real heroes aren't really heroes at all.

by Forest Taylor5/8/2019, 12:45 PM
The result is jarring, but the film is held up by the charming leads, Seth Rogan and Charlize Theron

To Infinity ... and Beyond!: Avengers: Infinity War

This is Your Life: Tully