For the fourth time in six years, the Badgers of Wisconsin are the champs of women's hockey. 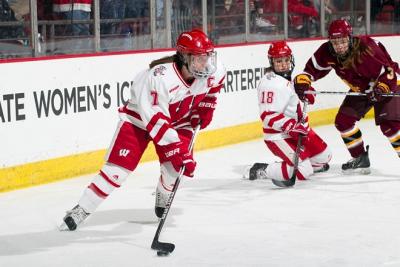 The Wisconsin Badgers have been called the best team in NCAA Division-I women's hockey the majority of the season.

As of Sunday afternoon, the Badgers are going by a different title – National Champions.

For the fourth time in six years, Wisconsin raised the NCAA Championship trophy at center ice after a 4-1 win over Boston University in front of 3,956 at Tullio Arena.

"They spent the whole season on being a team," said coach Mark Johnson, an Olympic gold medalist on the 1980 U.S. team. "We're a strong team; we've got chemistry and great leadership. It's an outstanding group, and they earned it. We're very excited to take the trophy back to Madison."

The chemistry showed, as Wisconsin was the better team from start to finish. The Badgers controlled the pace of play, outshot the Terriers 36-16, and frustrated a defense that has been stellar since the tournament began March 12.

"We came out with a lot of energy today, and that's what we needed," said senior captain Meghan Duggan, who, along with winning the Patty Kazmaier Memorial Award, was named the co-MVP of the tournament. "We came ready to win and not afraid to lose."

In their final 24 games this season, Wisconsin won 22 of them and earned two ties. Their last loss came Nov. 28 against Minnesota-Duluth.

After a scoreless but Badger-controlled first period where  Boston University, who beat Mercyhurst College to earn the program's first trip to the Frozen Four, managed just four shots, the Terriers fell behind early in the second period.

Carolyne Prevost redirected a point shot from Alev Kelter to put the Badgers ahead 1-0 2 minutes, 25 seconds into the middle frame. The shot was low to the ice when Prevost, stationed in the slot, got her blade on it and beat freshman goalie Kerrin Sperry on Wisconsin's 13th shot of the game.

That goal appeared to wake up the Badgers, who beat Boston College 3-2 in the semifinals, as they once again took charge.

The talented duo of Brooke Ammerman and Brianna Decker of the Badger's first line gave the bigger, faster, and stronger Badgers some breathing room late in the second as Ammerman banged home her 17th goal of the season on a loose puck in the crease.

After that goal, Boston coach Brian Durocher used the team's only timeout to calm down his team, which was frustrated and appeared to on its way to losing control of the game.

"We were running around in our defensive end and giving them opportunities," Boston captain Holly Lorms said. "It was a timeout to settle us down and get us back to the fundamentals."

It worked out well, as Marie-Philip Poulin created a turnover in the neutral zone and streaked in on Wisconsin's freshman goalie Alex Rigsby before roofing a backhand shot to cut the lead back to one with her 24th goal of the season at the 16 minute mark.

"It was a quick turnaround and that's what we needed," Boston forward Jenelle Kohanchuk said. "Our bench was right back in it. We were just staying positive."

While the Terriers might have felt they were back in the game, Wisconsin was the aggressor in the second period. They fired 18 shots and held BU to just four. In all, Wisconsin attempted 86 shots.

The one thing Boston had going was shutting down Duggan and Decker. The defense swarmed the talented forwards every time they had the puck and held them to just one assist in the game.

But Wisconsin has depth. All four lines can score and second-line center Mallory Deluce put the game away with her second goal of the tournament 16:37 into the final period. Third-line center Hillary Knight, who was co-MVP of the tournament with Duggan, took the puck to the net hard, but was denied by Sperry. Deluce was in the right place at the right time as she was left alone on top of the crease.

"Everybody just stepped up," Ammerman said. "We have nine forwards that can score, and that's pretty hard to beat."

With just over a minute left and down by two, Terriers' defenseman Catherin Ward unleashed a shot that beat Rigsby clean but clanked off the post.

That was just the way the night went for Boston University, as moments later Prevost flipped a puck in from center that inched into the open cage for the fourth and final Wisconsin goal.

"There is no question who the better team was today," Durocher said. "They have made a lot of teams look average this year, and you saw why."

It's the fourth title in school history for the Badgers, who also finished as runner-up in 2008.

"What our team has done this year, it's all I can ask for from the girls," Duggan said. "I'm just so proud of our team, not just for tonight, but the way we carried ourselves all season. We played for each other, and we played for our school."