You Ought to Know: Ed Kissell

Ed Kissell has done so much to beautify Erie, you may not have even noticed it all - until now. 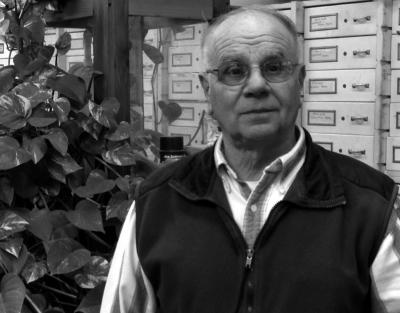 When most people hear the word "advocacy," they think of the efforts of individuals who take action to influence government programs and policies. I've seen many advocates fight for different causes in their lives. I know the struggles that these individuals go through in order to help facilitate change. It's a tireless battle and oftentimes fruitless. Yet most that I know or see continue to forge ahead, because they believe in something greater than what we know to be – or what we could even imagine.

Ed Kissell is a shining example of this.

If you've heard anything about Ed Kissell, you likely learned that he's an advocate for Erie's waterfront, or that he's someone who's volunteered his time in order to protect and enhance the public's right to use state waters for fishing and recreation. What you may not have heard is that while he continues this tireless mission, he's done so much more for our fair city, helping to enhance areas that you may not have otherwise noticed.

Think about this. You're driving along Erie's bayfront on a beautiful spring morning. You have this open view of the bay right next to you. Prisms of light bounce off the caps of the small waves below, and the sunlight that reflects on the dark blue water nearly mesmerizes you with its beauty. But what if that view didn't exist?

Now think about this. You work tirelessly to have the beautiful manicured lawn that surrounds your property. You know the time and effort that go into maintaining even the most delicate of flowers that bloom annually. But do you ever think about those small areas of green around the city and who takes care of those?

My conversation with Ed Kissell unfolded on a day exactly opposite of the above images. A cold rain/sleet combination was falling and the skies were a depressing grey, making it difficult to want to discuss our beautiful lake and those amazing views.

But after my conversation with him, I found a new appreciation, not only for the area in which we live, but also for the people that help to beautify those areas around us. While nature plants a seed, without the nurture, we wouldn't be able to take in the true beauty of it all.

Kissell first offers me a Reader's Digest version of his life. Raised near east second and Wallace street, Ed loved to fish, and his dad and friends would cross the railroad tracks near his home and pick their favorite spot along the bayfront to drop line. Years later he would go into the U.S. Army, serve in Korea – 10 years after the Korean War – ultimately move back to the United States, get a job at the Boston Store where he would meet his wife Mary, get married, have four children, and run a local business, Anderson Vacuum Sales & Service, where he still is today. Which is where we sit talking on this grey Monday.

But then he breaks it down a little further.

"I've known fishing all my life. When we were younger, we had to trespass going along the railroad tracks down to the industrial park by the bay area – half a block from the Soldiers & Sailors Home," he explains. "Back in the 1800s, the Railroad companies were the powers-to-be. They owned many of those properties and had the ways and means to buy and control."

Several areas were fenced off with no trespassing signs.

"We would find our way around those signs though and would often fish or go swimming in those areas," he confesses. "This would be in the 1950s."

Fast-forward to the mid-'80s. Eventually, the bayfront would begin a renaissance of sorts and developers came in looking to develop those lands." During that time, Kissell was the President of S.O.N.S. – [Save Our Native Species] – of Lake Erie, a volunteer group of sportsmen whose mission is to improve fishing and the fishery of Lake Erie.

"At this time, with the help and support of the organization I was able to convince local officials to enact ordinances that would provide free public access for fishing."

He also helped enact the Waterfront Zone Ordinance, where developers must provide a 12-foot-wide walkway along the water's edge in all new development.

But that's not all.

"In addition to the Waterfront Zone Ordinance, we also made sure there was a 50-foot height restriction on all new development below the bluff." And their reasoning? "The water is our magnet. Erieites know this and often take this for granted, but many don't realize how this could have been different without the height restrictions."

According to Kissell, there are three avenues of access to the Bayfront – the Bluff area for viewing; the public walkways down along the water (except in the industrial areas for safety purposes); and then the promenade that runs from Frontier Park to Penn State Erie, The Behrend College. "We have more public access in Erie than Cleveland does on their waterfront."

And then I learn something I take for granted every time I go to Cleveland. The Rock 'n' Roll Hall of Fame, the Cleveland Stadium, and the Great Lakes Science Center are all along the waterfront. They all have different levels of glass in order to peer through and see the lake, but none of them afford the same access or views Erie does.

"Think about this. If we had put one more rung up on the Intermodal Building, it would block the view from the Church of the Nativity at the foot of Front Street." And we all know  this church. The architecturally ornate cathedral crowned with golden domes that seemingly glow on a bright sunny day. "And the same would have happened at the foot of Sassafras – but you can look over the parking garage and can look over the walkover from the Sheraton and still see the water."

But that's still not all.

A couple of decades ago, when the Bayfront Parkway was being developed, the corner on West Eighth Street – where there's a sign that reads "Welcome to Erie's Bayfront" – in the area right across from Reed Manufacturing, there was only a mound of dirt, some scrap, and grass seed.

"It was not pretty," Kissell tells me. So he did something about it. "I wrote a letter to Mayor Joyce Savocchio and asked if we could adopt that corner and beautify it."

This was in the days before the adopt-a-park foundations were even thought of.

"The only thing the Mayor said was, 'Kissell, just don't make it ungodly.' And that was pretty much it."

So, Kissell went to work.

"I really have to give credit to so many folks in our community. Our first president of S.O.N.S., Bud Winschel – who had passed before this time – had started a landscape business with his boys. The boys did the basics – they brought in the dirt and created the layout and such."

Kissell would then get several nurseries in Fairview that he knew to donate some trees and bushes.

"I then went to John Ehrman from Allburn Florists, and now each year the family donates the flowers for the corner."

But the legwork would come from him and his wife. "Mary and I would plant 16 to 18 flats of flowers on that corner, and at the time, there was no water access, so there was an elderly lady nearby, and I used to take a 200-feet hose, and with her permission, water the area. And in the beginning, it was a daily doing because that corner dried out a lot due to the direct sunlight."

In return for her generosity, Kissell offered to mow her lawn. Eventually though, he decided to go to the city for help. "I went to a water authority meeting one time and asked them to put a tap and a standing spigot in that location." Yet, initially, they would turn him down.

But persistence is a problem solved.

Kissell would do his research. He found that there were two water leaks on different properties in the city, made some notes of them, and went back. "This time I brought up the two leaks and said that they were probably wasting more water than I would ever use."

A few days later, he got a call asking where to put the tap.

Kissell has not only helped beautify that area, but others as well. He and his wife, Mary have created small landscapes, and put in irrigation systems, in various areas on the east and west side –with the help of many great people and several local organizations. Even today, he still serves as vice president of the S.O.N.S of Lake Erie and he still attends numerous city council, water authority, and port authority meetings simply as an advocate for the city.

And the truth is, I could go on. I am in awe of the continual energy, passion, and enthusiasm this man has for "the greater good" of beautifying our city – someone who is often unrecognized and rarely applauded, yet continues to volunteer his time and work tirelessly simply because he wants to make our city a better place to live, work and play.