At Play in the Fields of the Bored: The Scene that Surrounds You

A call to arms: Michael Bennett's scope on the scene 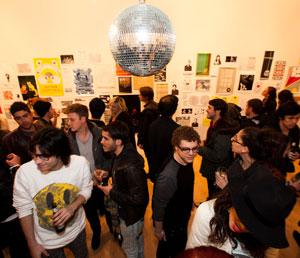 It's not often you can look around and find yourself in the middle of something happening. There needs to be time and distance and reflection in order to have perspective of the occasion. But I stopped and looked around and found myself in the midst of an exploding Erie music scene.

I wonder if there were people in my position in 1960s London, or the Bowery in the mid-'70s, or Minneapolis in the 1980s, or Seattle in the early '90s that felt things were breaking through the surface and it was wonderful to behold.

Now, with all that build up, do I think Erie is about to launch the next Rolling Stones, or Talking Heads, or Replacements or Nirvana—actually that remains to be seen. I do know that there is a vibrant and explosively entertaining music scene happening in this town and not many people seem to be aware of it.

Erie has a long tradition of great bands, great venues, and great times, but they all fall short or implode before their time. Why is now different?

The talent level for one. The bands that started putting things together in the late '80s and early '90s are now the elder statesmen of the scene and are more than willing to help shepherd the neophytes through the system—still rocking hard and in many cases joining forces with younger talent to create astounding music and beautiful energy. There are bands sprouting up all over the city and coming in from Edinboro and Meadville just to participate.

Along with the talent, there are bands of every stripe and every genre playing out nearly every night of the week. You can hear blue grass and folk, punk and metal, and original rock 'n' roll coming at you from all sides with no quarter given. These aren't state fair cover bands plowing through a set of Journey's greatest "hits;" these are musical and lyrical talents creating sound for the sheer joy of playing.

But there have always been great bands in Erie. Why is it so much better now?

Infrastructure. I have always thought the Erie scene worked like anything else, and it was simply cyclical. Like some kind of musical stock market, fluctuating and dipping, peaking and falling… the scene could never hold itself together. I thought maybe it had something to do with the organization around the music. But I can't say that now. The venues are geared more towards supporting the bands rather than trying to fleece them. There is promotion for the shows online and through the air. There is a core group of people that want to see good music in Erie and will do whatever it takes to support their local scene. The problem is that it isn't enough...

'Give Them Love and They'll Give It Back to You'

In Our Ears: Podcasts We've Been Loving

by Larry Wheaton3/11/2020, 1:00 PM
The Playhouse debuts Something Rotten! for the first time in community theater