We had a chance to chat with Maps & Atlases frontman Dave Davison after the band performed at Brite Winter. 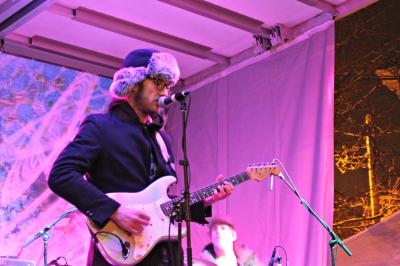 There were a lot of exciting things that happened at Cleveland's Brite Winter - in fact, Erie should think about doing something like it - but one particularly interesting aspect was a chance to see headline band Maps & Atlases in action. I did a Q&A with the band back in 2013, so it was nice to see the band back in action. I had a chance to chat with Maps & Atlases frontman Dave Davison after the Chicago group braved the cold at Brite Winter and we talked about the performance, the band's future, and how freaking cold it's been.

Alex Bieler: How do you think the show went?

Dave Davison: It was really fun. This is the first time we've ever played outside in the winter for sure. It was interesting. If I had warmer hands, I think it would have been most ideal, but it was still really awesome. It's like if you get a shot of novacaine to get a cavity filled and then you try to talk, it seems like aomething that you should be able to do, but you're just like "ah, what's happening!" It was fun, though and really cool. Just the environment... it's good to see so many people doing something outside at this point in the winter. Right now is the point of winter where everybody is the most fed up with it, so it's cool to have something like this.

AB: What was your thought process when the band was approached to play at a winter festival?

DD: We had heard of the festival, but I don't think any of us initially realized that it was actually outside. We were really surprised, but we were excited. This is the most ideal setup for an outdoor festival in the winter. It's really cool, there are so many people, everyone is really friendly, and there's a lot of stuff going on. There's even an ice sculpture with fire in it.

AB: Was there a moment during the show where you realized "Ah crap, this is going to be hard" due to the weather?

DD: Well, at the beginning when I was checking my guitar, I was playing a song with some fingerpicking and I was definitely feeling like my fingers they were not functionally capable of doing this and the first song we played has a lot of fingerpicking  and starts off with me playing guitar and singing. I knew that I better warm my hands up before I tried doing it and I started off and it was going okay, but a minute away from the heater, my fingers started to get cold. I'm not dwelling on it too much, but it was interesting.

AB: It's just so appropriate that you have a song called "Winter," as well.

DD: Yeah, we build a lot of cold-weather references in our songs for sure.

AB: You're from Chicago, right? So you're pretty familiar wit it.

DD: Yeah, it's very cold. It's been insanely cold this week. Today really is nice.

AB: I was walking downtown the other day and it was negative-8 degrees.

DD: It was insane. Everything was cancelled on a Thursday and nobody was going outside to do anything. Being here and it being this kind of weather isn't bad at all.

AB: So, I have to ask, is Maps & Atlases a three-piece band now? I noticed Erin [Elders] wasn't up there for the show.

DD: He's been doing his thing and we've been touring as a three-piece for a little while now and he's working on his own stuff.

AB: Are you working on any new material?

DD: We've been working on a bunch of different stuff. We haven't been really too sure what the release would be or what it would look like, but hopefully there's something soon and hopefully we'll have some news in the not-too-distant future. Usually when we work on stuff, there's some recording and then we just give it some space to take shape and make sense on its own rather than being like "we've got to release something, so let's just buckle down and do it." It's just working continuously and allowing the shape to reveal itself. I think that's historically worked for us, to just throw a bunch of ideas out there and let it makes sense. It seems like we're getting into the zone where that shape is becoming more apparent.

AB: So, do shows like this one make you think back about having that beard of yours from a couple of years ago?

AB: Didn't you shave it during the "Old Ash" video?

DD: Yeah. I'm sure there is a difference, but I'm not sure if it's that much of a difference. I wonder, though... When I shaved, I was in California and it was May, so it wasn't cold or anything, but if I went inside now and shaved and came back out, I might notice something.