The Otters have a new owner, and so begins a new Otters era. Will you be a part of it? 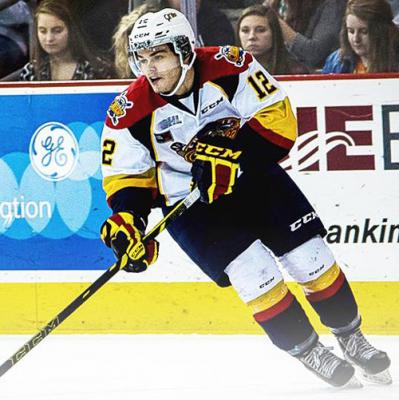 Great news for local hockey fans, as the Erie Otters have a new owner, and even greater news for the Otters' faithful as the new main charge is Jim Waters, an extremely impressive, and successful, businessman who appears ready to run the OHL organization in a way it has never been run before. And that is in a first-class manner on and off the ice.

If first impressions count for anything, Waters is off to a flying start.

He actually called me when he heard I would like to set up an interview with him and was a guest on my Sports Blitz show that very same day.

It was a positive delight talking to an owner that wanted to discuss the team, the city, the fans, and the future – rather than himself. I had to actually prod a bit to get some information about his life.

Refreshing to say the least for a man who came to town with very little fanfare and did not have a self-proclaimed "Mr. Hockey" title.

If the Otters play with the same enthusiasm the new owner has shown since the purchase, it's going to be a great ride. I'm sure I'll never know what it's like to spend more than $7,000,000 for a sports' franchise, but I'm not too sure I would be in such a good mood.

However, he did show his management philosophy for the Erie team when asked if he was going to be a hands-on owner.

"It would be crazy to spend that much money and not be on top of things," Waters told the Erie Reader.

Personally, I don't think the Toronto native is crazy, so I believe Otters' fan will see his prints all over the organization. He adds that he will be involved with many of the business decisions – along with NHL veteran Roy Mlakar – and will leave the on-ice and personnel moves to the experts – that being coaches, scouts, and general manager.

The Toronto Maple Leafs and Toronto Blue Jays die-hard has already done his homework on Erie and the organization. "I was here several times to watch the Otters in the playoffs, and it was a great experience. The fans are incredible."

He admitted he had never been to our city before that, but was told by the hockey people he trusts that the arena was absolutely beautiful and that he would love Erie. He added, "They were absolutely on point."

As a former radio mogul, Waters knows the value of "knowing the market" and pointed out, "I have really been impressed with the people already on board, and I will be counting heavily and John (Frey) and Jaime (Cieszynski) for direction. It's obvious they are well-respected in the community. and there's no doubt they are great assets."

The Canadian broadcaster accumulated numerous awards during his radio days, including being honored as the Broadcasting Executive of the Year, and he was also inducted into the Canadian Music Industry Fall of Fame

The new owner, who played a lot of hockey growing up, told the ER, "This is a dream come true for me, and I am not going to let it fail."

That's a refreshing attitude and a cause for local fans to be optimistic about the future of the team.

It also bodes well for the future of the front office, as Frey, who is extremely well-respected in the local sports community after 11 years as General Manager of the Erie SeaWolves and another three with the Otters, pointed out, "After one meeting you know Jim is the kind of person you want to work for. He has a presence that excites the whole organization and he's such a successful businessman that everyone wants to observe and learn from him."

He added, "With Jim and Roy Mlakar, the Erie fans are blessed. This will be a great organization."

Hopefully the Waters Era will not turn into the roller coaster ride that was the trademark of the previous administration, seemingly leaving the Otters to fall into an abyss following three consecutive first-place finishes. After winning the OHL crown in 2001-2002, it was rough sledding – or skating – the next 11 seasons. Included in this streak was the 2011-2012 season when the locals finished with just 10 wins and only 26 points.

Ending the year with just 26 points is the equivalent getting a 500 on your college boards when you get 400 for spelling you your name correctly. However, on the plus side, it enabled the Otters to get Connor McDavid with the first pick in the OHL, draft this leading to a second and a first place in the division, including a runner-up spot in the OHL playoffs.

Mlakar, who the new owner is extremely confident in, will bring some much needed business acumen to the Erie front office, as he was the former president and CEO of the NHL's Ottawa Senators, as well an executive with the Los Angeles Kings and also has front office experience with the Pittsburgh Penguins. He is a native of Parma, Ohio, and is in the process of moving to Erie from Cleveland.

Waters is also thrilled to have Knoblauch back as coach. "Kris has established himself as one of the premier coaches in minor league hockey," explains Waters, adding, "there is no doubt we will see him in the NHL some day."

I have to admit that in the 19 years the Otters have been in Erie, I have seen one period of action (that's correct, a total of 20 minutes of action) so far. However, after two telephone sessions (I haven't even met him face-to-face and I'm this excited) with the new main man, I expect that one period total to triple after just one game in the upcoming season. With many more to follow.

Also, I know you may think I was neglecting my duty when I didn't ask the Otters' owner the inevitable question, "Are you moving the team?" However, there is a reason I didn't pose this question. I firmly believe it's a moot point, as there's no doubt in my mind Waters did not buy the team to move it.

As a matter of fact, at the end of the interview, he commented that I was the first person that didn't make that the initial query to him. I took that as a compliment.

The new owner is a charismatic individual, and I am a believer already. After two phone interviews, I am totally convinced our great community is getting an owner "that just gets it!"

What Made the Difference in the Otters' Cup Win

ER Sports: JRL is on a roll!

by James R. LeCorchick10/28/2015, 2:45 PM
After making predictions for football games for over 40 years, there are numerous weekends I have blocked out of my mind.