Ryan Bartosek has an equation: Eric Brewer and Friends plus Phish and The crooked i equals one show you don't want to miss. 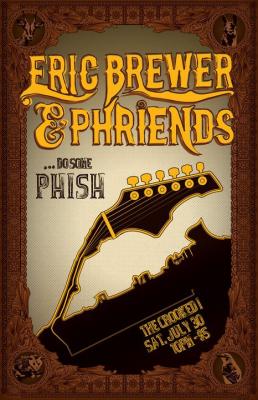 When it comes to the Erie music scene, we're knee deep in coverband country. The selection of local bands that spend their weekends playing an entire evening's worth of songs written by artists more famous than themselves is vast. They pack local bars week in and week out and for the most part are top on the list for most of Erie's high profile gigs.

While to many that picture may seem bleak, there are exceptions to the rule. For instance you have The crooked i, Erie's hottest spot for live music that caters to bands performing original music. And you have Erie all-stars Eric Brewer& Friends, a mega-talented band that can be caught locally just about every weekend that fills the majority of their shows with their own music.

But what would happen if one of Erie's hottest original bands stepped on stage in Erie's home of original music and performed an entire evening of cover songs? Well, on July 30 we're going to find out as Erie's favorite jamband steps onto The crooked i stage and pays tribute to the king of all jambands: Phish.

"Brewer approached me with the idea, and after witnessing what these guys are capable of with the Pink Floyd stuff and knowing how many people love Phish around here, I felt that this would be an opportunity to do some thing really special," explains crooked i owner Marty Schwab as to why he's bring a tribute band to The i. "No band in Erie has tried to pull off Phish's music at this level before and I think it's going to be an awesome experience."

The term jamband basically describes a band who utilizes the art of improvisation as the basis of much of their show. I'm not talking about extended instrumental sections where a soloist simply runs through scales in a certain key while a band backs them up, repeating a series of chord changes, similar to how some jazz or blues bands do. A band like Phish takes improvisation to the next level. On a good night Phish has the ability to take listeners on extended, sonic rollercoaster rides, with all four band members communicating telepathically and composing new, cohesive music virtually in the moment.

All of this may sound a bit trite to many, but in concert Phish has left plenty of non-believers in a state of bliss, lost in the music amongst the seas of dreadlocked, patchouli-soaked hippies. In fact, after more than 20 years in existence the Burlington, VT jamband has become one of the nation's top drawing live acts, taking the reins from the Grateful Dead after Jerry Garcia's death in 1995.

Improvisation or "jamming" is a skill that EB&F have spent a great deal of time honing, and after years of practice they've become quite accomplished. While they have their own distinct sound, the band—comprised of guitarist Eric Brewer, drummer Steve Barone, bassist Ralph Reitinger, pianist Charlie Meyer, and saxophonist Joe Cieslak—certainly has the chops to hold their own with just about any jamband out there, making them a perfect fit to tackle the music of Phish. But then again, this wouldn't be the first time some of these guys have donned a musical costume and performed an entire evening's worth of one of their favorite band's music.
Not all that long ago, Brewer, Barone, Reitinger, and Cieslak were all involved in Darkslider, a Pink Floyd cover band that covered the epic album Dark Side of the Moon in its entirety, along with other Pink Floyd selections in front of capacity crowds at Docksider as well as one of the downtown block parties. With those successes doing the Pink Floyd thing, it's obvious these musicians would want to try something like this again. But why Phish?

"Most of us were involved with Darkslider, but Phish's music has a quirky complexity that's a direct contrast to Pink Floyd's spaciousness and depth," Barone explains. EB&F's frontman and namesake concurs. "It's not cut and dried like Pink Floyd," Brewer says. "You just never know what Phish is going to pull out during any particular song and the same tune can differ from show to show, so it's not a matter of just learning a song note for note. We've been working on this steadily for about three months and it's been time consuming because of all the variables of the same songs."

When it comes to a band like Phish, the variables are unlimited. For starters, between Phish's 11 studio albums, eight official live releases, and collection of unreleased material played only in concert, the band has well over 100 original songs to choose from. Their original compositions can be delicately intricate, goose-bump-inducing works of beauty with expertly crafted piano melodies—or, they can be nasty, synth-drenched, ass-shaking, cowfunk dance numbers. Their songs can be simple pop or country ditties, or they can be in your face onslaughts of mind melting prog-rock. In many ways, they're a four-piece rock band that composes like a symphony, all tied together by a guitar virtuoso who looks like Chuck Norris's nerdy little brother. But with Phish's core line-up consisting of guitar, bass, drums, and piano, EB&F have a variable all their own thrown into the mix with saxophonist Joe Cieslak.

Lucky for EB&F a handful of select Phish shows in the early and mid-'90s feature the Giant Country Horns, a three-piece horn section that toured briefly with Phish and spiced up many of their songs. So in a way, there's a template in place.

"We wanted to try and tailor the set with songs that have versions with horn parts in them," said Cieslak, the member of EB&F who's not only seen the most Phish shows, but was also present at Phish's 1994 stop at Erie's Warner Theatre, where he even got to meet Phish drummer John Fishman. "There's a show from Arrowhead Ranch in 1991 that features the Giant Country Horns on most of the songs, not that we're going to do a specific show. So for the purists out there, I will be adding horn parts to some of the tunes we've chosen. Like Phish said so eloquently: 'what is a band without saxophone?!' But not all songs will have the sax because we're trying to capture their sound as close as we can."

Variables aside, since this is a one night occasion, EB&F did force some parameters on themselves. "The songs we chose were mostly by request," Brewer notes of the set list. "We will not be repeating any of the Phish covers you may have heard us do before. We've mainly drawn from '94 to '96 tour material, which many consider to be Phish at the top of their game."

And Eric Brewer & Friends will undoubtedly be at the top of their game as well on July 30 and crooked i owner Marty Schwab will enjoy seeing his bar full of eager danceaholics. While those in attendance won't necessarily be able to count this as another official Phish concert under their belts, with all the time and effort going into it, the show will be a special night for Phishheads and the uninitiated alike, and clearly worth the $5 admission.

by Ryan Bartosek3/25/2011, 11:11 AM
Three nights and three great bands. Best get yourself down to the i as ekoostik hookah, The Recipe, and BoomBox take the stage and rock downtown Erie.