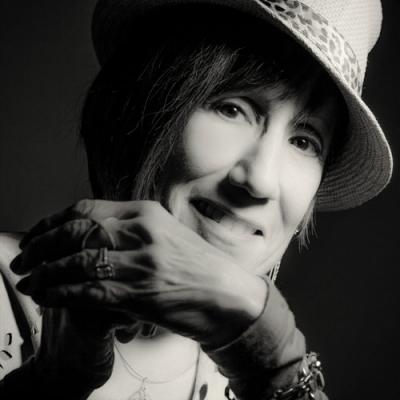 "Music has always been a big part of my life. But so has art. So when all this came about and I thought of this idea, it just went together."

Elisa Guida: Well, the first time I was diagnosed with breast cancer, I was 40 years old. I had just gotten married, was hoping to start a family, and that was just not in the cards. Fast forward 10 years, and I was diagnosed a second time. I did not have a lump either time. It will soon be 11 years since my second diagnosis. Life was still trucking along and what ended up happening was that in 2008, I was at a Bon Jovi concert and had been commissioned to make a guitar string bracelet through my other business [La Petite Jewelers]. I said to my husband, Ed, "I should get famous musicians to donate their used guitar strings and I should start helping [cancer patients]." To date, we've given out 1,464 gas, grocery, or pharmacy gift cards, plus medical and living expense grants. This program of ours is a national program. So in this little bit of time that StringsforaCURE has been around, we've helped over 1,215 cancer patients, giving over $184,104 directly to patients.

"In this little bit of time that StringsforaCURE has been around, we've helped over 1,215 cancer patients, giving over $184,104 directly to patients."

EB: What made you decide to give up your own work and pursue this foundation?

EG: Originally, I was looking at it as a creative outlet. I know what it's like to get a pick-me-up. I was considering the gift cards as a pick-me-up to get in the mail. To think that a total stranger is thinking of you during your treatments – I know what that feels like. But my friends should have sat me down! I joke about it, and last night I was blaming my mother. My mother said to me in 2010, "If you really want to do this, you should do it." Did I think it through? No!

EB: Did you realize the time and commitment?

EG: No. I actually thought I was still going to be able to run my other business in conjunction with StringsforaCURE. That was an impossibility.

EB: Do you see passing off the administrative duties in the future?

EG: I don't see that. There are so many hospitals now that depend on us to help their patients and we keep implementing new programs. There's a lot of behind the scenes work. Everybody thought it was just about the jewelry and didn't realize it was about the programs. The jewelry accounts for about 10 percent of our money. The strings are recycled materials; the musicians send them to us, but they would have been throwing them into the trash. There's no money value to our charity with the strings. The only time there's a value is when I have time to make a piece and if someone buys it. As a jeweler by trade, I knew I was going to have to give up my trade to run the foundation.

EB: On your website, you mentioned the effect of music on your life.

EG: I have always been into music. I went to see the Beatles when I was nine. I played the piano from ages nine to 14. After graduating from Mercyhurst with a fine art degree in jewelry, I started following and supporting the local music scene. That's why when we have our annual "Picking on Cancer" fundraiser, we always get the music donated. Ed and I have always gone to shows. During college I was going back to Philly to go to concerts. I was at [the Concert for] Bangladesh in the third row. Music has always been a big part of my life. But so has art. So when all this came about and I thought of this idea, it just went together.

EB: So the jewelry that you create starts with a guitar string.

EG: Yes. In the beginning, every single piece was custom. I would sit at my bench, look at the string, take the string apart, add whatever, put it up online, and it was sold. That's how StringsforaCURE got started. We sold 1,000 custom pieces in the first year.

Now when I sit down, I have a select set of designs. Like the Rock Garden of Rock Stars strings: It's a flower, and I can do that with anybody's string. I also do crosses, they're very popular.

EB: Are there musicians you would like to see donate?

EG: The biggest thrill was Bon Jovi. I wrote on the back of my ticket in 2008: Bon Jovi, Chris Daughtry, Paul McCartney. I still have the ticket. I did get Bon Jovi's and Daughtry's. There's a list on our website of all the musicians who have donated, like Lyle Lovett, Willie Nelson, Wynonna Judd, Bon Jovi, Daryl Hall, Melissa Etheridge, and Joe Bonamassa (who was the first to donate years ago). So if I ventured to say who I would like to get: Springsteen and McCartney.

EB: A wish for StringsforaCURE?

EG: I would like a famous musician to take us under their wing. To recognize the work that this little charity is doing. Then we could offer all of our programs, medical grants, living expense grants, etc. all across the United States.