by Nick Warren
View ProfileTwitterInstagramRSS Feed
December 8, 2021 at 10:00 AM 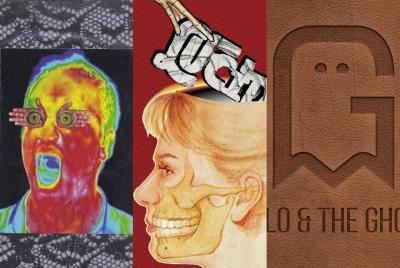 It wasn't a bad year at all for Erie recordings. Along with the top picks listed below, there was the collaborative opus of Taken Me a While from Elle Taylor. There was Mala Sangre's blistering LP Catholic Cemetery. Tone Fach (Tony Facchiano) brought 18 explosive tracks of hip-hop glory to the table. Gabe Poland gave us the stripped-down dark folk of No Turning Back. We got a live album from Matty B & the Pickles, showcasing their energetic, retro revue. Six Year Stretch put out their third full-length album Crazy Ride, filled with beautiful, radio-ready earworms. Jeremy Yamma put out two full albums under the moniker High Seer, with mesmerizing loops you need to hear. Our very own Tommy Link released Grow, a gorgeous songwriter's love-letter of a record that won't get out of your head. I hear there's even an unreleased album by Optimistic Apocalypse floating around out in the ether, not to mention the fact that there were plenty of great EPs too, like Maniacal Device's Hail to the King, Mallory Run's Picture Perfect, Fog Giant's eponymous EP, and Eat Glass, the hard-hitting debut from blouses. Whether by ignorance, or by real estate, I'm leaving plenty out of course, as Erie makes a whole lot of music. And that's a really good thing.

This is just a damn fine album. Robert Jensen, the man behind Erie's Basement Transmissions, has not only fostered generations of local artists, but is able to put his money where his mouth is too, as clearly evidenced on Cranberry Blood. The album exists in this simultaneously chaotic and chill atmosphere, moving like jump cuts pieced together by electronic instrumentation. Synth work, modulated vocals, and some great guests dot the landscape of the record. This cutting-edge experimental endeavor is exactly what we need, creating something truly new and infinitely playable.

I'm so excited that LUC!D (sometimes styled as LUC!D) exists. The band is relatively new, formed in 2019, and don't seem to be afraid of anything. The quartet have blended genres to build their own unique sound. Looking at them and knowing their politics, you might want to call them punk, but that would be sonically reductive. An often psychedelic swirl of sensuous rallying cries, KiTCHEN GROOVES' 36 minutes fly by. On first listen, the band's sound is so varied you might find yourself checking to make sure shuffle isn't on. The innovative energy of this band is something we could all use more of.

It's no coincidence that Tyler Smilo often finds himself on these year-end lists. He's an outstandingly consistent presence in the Erie music scene, and he's prolific, releasing full albums at a regular pace that's tiring to think about. This album finds him and his backing band, The Ghost at the top of their game. The lyrics are beautiful, arranging Smilo's often fragmented, frenetic thoughts into a poetic throughline that's easy to sympathize with. While on the surface he's using the language of post-Dylan troubadours, Smilo, like everyone on this list, is pushing for something more.

Know something you wish was on the list? Email Nick Warren at nick@eriereader.com to make next year even better.