The Erie Otters were sluggish to start, but still managed to grind out a 5-2 win over the Niagara IceDogs Friday evening. 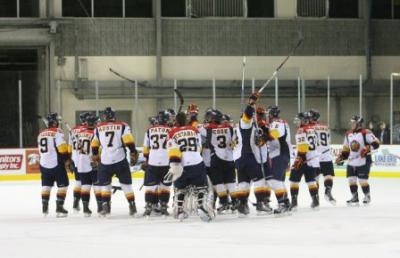 Even on a night where his team staggered throughout the majority of the contest, Brett Thompson's stick remained hot.
Thompson scored the game-winning goal, his 39th of the season, 6 minutes, 27 seconds into the third period to secure the Erie Otters' 5-2 win over Eastern Conference rival Niagara in front of 3,664 at the Tullio Arena.
"It's a huge two points we got," said Thompson, who has goals in his last seven games, two behind the franchise record set by Brad Boyes. "Every win is so huge. Things just seem to be going right for me lately."
It was the Otters fourth win in as many games, but this one was a little more difficult than the previous three. Coming into Friday, the Otters have outscored their opponents 22-6, including a 10-goal effort Feb. 13 at Kingston.
They had to earn every goal in this game as they were challenged from start-to-finish by a short-handed Niagara team who was without leading scorer Jason Strome and Alex Friesen.
But through the first two periods, Erie played sluggish and uninspired.
Even with being granted five power play opportunities in the first period, the only goal went to Niagara's Darren Archibald, who scored a short-handed goal with just over two minutes left. Erie, who came into the contest with the league's eighth-ranked power play, finished just 1-for-10 with the man advantage.
"We didn't play very well at all," coach Robbie Ftorek said. "We were too individualistic on the power play."
Erie didn't wait long in the second period to respond.
Rookie Connor Crisp and Phil Varone scored two goals in two minutes to turn a 1-0 deficit into a 2-1 lead before Niagara could get comfortable on the bench. Varone's power-play goal extended his point streak to 15 games, second behind Niagara's Freddie Hamilton, who has points in his last 19.
But even with the hot start to open the period, Niagara stole back the momentum with Steven Shipley's goal at the 14:06 mark, sending the teams to the locker room tied at 2.
"We just had a lot of mistakes in our zone," Ftorek said. "The guys just weren't sharp."
Apparently, enough was enough in the mind of Erie's second line of Varone, Thompson and Anthony Luciani.
On a night where Greg McKegg, Mike Cazzola and Shawn Szydlowski were shut down, the hottest trio on the team took control of the game.
On what appeared to be just an innocent dump in behind the net, goalie Mark Visentin and the Niagara defense couldn't clear the puck. Thompson intercepted a pass and deposited the goal into a vacant net. Visentin replaced Dalton McGrath midway through the second period.
"I heard one of the (Niagara) defenseman calling for a reverse," Thompson said. "So I just put my stick in the (passing) lane and they reversed it right into my stick. I was just reading the play of the defense."
Shortly after that blunder, Visentin struggled to control another dump in before Luciani took advantage for his 23rd goal of the season, which gave the Otters some breathing room with a 4-2 lead.
Visentin has been a thorn in the Otters' side this season, picking up two wins while just allowing four total goals.
"He's a great goalie," Varone said. " But no goalie is unbeatable, so we did a good job."
Varone put the finishing touches on the win, which moved the surging Otters into a tie with Plymouth for fifth in the Western Conference, with an empty net goal with 21 seconds left.
Often overlooked because of the offense, Ramis Sadikov had another solid effort in net, stopping 29-of-31 shots for his 31st win of the year in his league-leading 53rd start. His 31 wins are the most in the OHL.
A win is a win and these days the Otters will take them any way they can. Only the top four teams in the conference get home ice advantage. The Otters are 17-10-0-1 at the Tullio Arena this season.
"If you look at the top teams in the conference, they all have amazing home records," Varone said. "You want to be good at home; you want the crowd behind you."
Erie has 11 games remaining in the regular season, seven of which come at home. One of those comes tonight, as division rival Guelph will make its last trip to the Tullio Arena for a 7 p.m. start.
Erie is just three points behind Windsor for the No. 4 seed – which means they have to be prepared to win every night, something they did not do Friday.
"We just weren't prepared (tonight)," Varone said. "Yeah, we won, so we'll take that out of it. We've got to be better. But two points is two points, but hopefully we come out better tomorrow."