Geeked Out: The Return of the City Simulator

Cities: Skylines and the return of the city simulator. 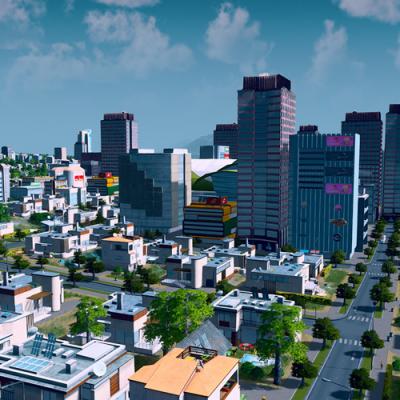 If you played computer games when you were younger, you might remember building virtual cities and managing civic services. This genre of game is often referred to as a "city simulator," and back in 1989 Sim City was the city simulator game to play.

Well, now it's 2015, and the Sim City franchise has since stumbled and fallen. Don't worry, city simulator fanatics; we finally have a worthy successor to allow us to find immense satisfaction in traffic management and it's Cities: Skylines.

Colossal Order is the Finnish game studio responsible for this breakout hit, and Cities: Skylines is the modern city simulator game we wannabe city planners have all been anxiously awaiting. It has all the elements fans of the genre have been waiting for: curved roads, beautiful visuals, and super-granular traffic management.

To preface, Maxis, the developers behind Sim City, did reboot the franchise back in 2013. Anticipations where high and excitement was in the air – we would finally get a game worthy of modern and more powerful computers. However, that excitement quickly turned to dread as the final release of the 2013 Sim City was riddled with issues.

To be blunt, the 2013 Sim City sucked — partly because the maps were too tiny and the promotion cross-city interaction became tedious and dull, resulting in a gaming dud. Even worse was that all players were forced to be always connected to the Internet, which severely slowed game-speed due to server lag. A key aspect to these games is the ability to speed up because cities, naturally, take awhile to grow. Players got a lobotomized version of a game that had sown the seeds of promise. Maybe you were right there with me two years ago, leaving the monitor to go back to kicking the can down the road, sighing as we look for something… anything to give us what we desired.

It took two years, but now we can stop kicking that proverbial can. Sure, Cities: Skylines lacks online multiplayer, so I won't get to check in on my friends' cities. But unlike the 2013 Sim City, the game's fastest speed was functional on day-one! The real pièce de résistance of Cities: Skylines is how open the game is to the community. "Modding" is a term used when players of a game are given access to the code and assets of a game to tinker with, change, or modify current aspects of the game. An easy example of a small mod in Cities: Skylines is one that a fan of the game made when he created a Starbucks and In-and-Out buildings that can appear in commercial zoning. Games that are moddable extend their lifetimes by multitudes and also harness the creative force of people who love the game to make it better.

When games are launched, they have a feature set that might not include all of the things the developer wished to get in. Developers often have to cut features due to time constraints, which is okay, because if they didn't some games would never get released.

However, by opening the game up you let the community fill in some gaps and it also helps the developers navigate to the features they might have had on the drawing board but weren't sure if people wanted them. Right at the start of the game's release, no means to upgrade certain types of roads existed due to their one-way structure and layout. A mod was created to solve this, which then lead the team at Colossal Order to just implement it as a feature in the game. This is how you support a gaming community, and this was one of the major failings of the Maxis 2013 Sim City as it locked the game's code and assets down and disallowed fans to edit or modify the game.

So what are you waiting for? Pick up a copy of the PC game online! Grab a hard hat, some drafting pencils, and let the civil architect inside of you shine. Ah, who am I kidding; grab the game and just mess around, build some roads, and watch your city grow!