Smart innovation makes thoughtful use of what we already have. 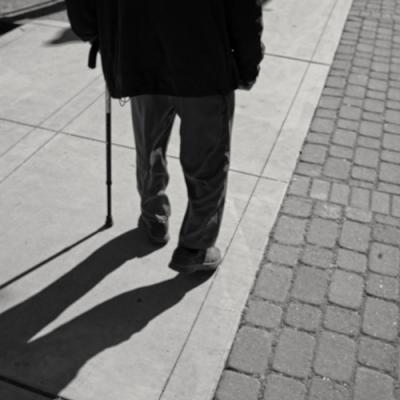 It's late afternoon at the bus stop downtown. The slanty, diffuse winter light isn't warming the air, but glows across the faces of passersby. February surrounds us in tolerable cold. Coats are open at the collar. Cigarettes and phones are held between bare fingers. And those of us waiting for the bus shuffle around, in and out of the shelter, gazing eastward.

A man, 60 or so, ambles up. He relies heavily on his cane, and stops a few yards short of the shelter. His arrival is slow but in plenty of time. I think of my tendency to rush through life: a habitual pattern I revert to even when there's no hurry. I don't envy his impediment but admire his air of calm surrender. I may be misreading serenity on his face, but we learn from others what we need to in any moment, and his countenance whispers, slow down.

The dance of waiting plays out among the bus riders. We hurry tensely to the stop. Then our shoulders drop once we've made it. Then stillness settles as the pieces of our rushing selves fall together. Then impatient shuffling ensues, either on foot or through smartphone feeds.

Even Unhurried Man starts to meander a bit. An empty snack size potato chip bag tornado-ing on the concrete catches his eye. It swirls under the bench, trapped where most of us can't reach it (not that anyone's tried). He wanders toward it, uses his cane to pull it closer, then leans over to pick it up. While down there, he sees a couple more discarded wrappers and grabs them, too. He fits what he can in his non-cane hand, then makes his way to the trashcan for disposal.

Though I admire the man's use of waiting, I'd probably dismiss this unremarkable event if we weren't in the midst of planning this issue of the Reader. Instead, I think about the simple use of his cane – something already made, that he already owned – in an innovative way. No new infrastructure or resources required.

We humans are smart. We can solve our perceived problems in breathtakingly ingenious ways. But just because we can invent and manufacture new stuff, it doesn't mean we always should.

After boarding the bus, I spend the 20-minute ride home thinking about how much we've invented that simply isn't necessary. A quick Google search would probably reveal a pile of cane-like litter grabbers that could make this job easier and more efficient.

But they'd likely be made by companies who employ third world workers in exploitative conditions. And of nonrenewable plastics destined to add to the already horrendous quagmire in our landfills and oceans. And cheaply – in the spirit of planned obsolescence that builds breakdown (and thus, another purchase) into the construction of nearly everything.

We humans are smart. We can solve our perceived problems in breathtakingly ingenious ways. But just because we can invent and manufacture new stuff, it doesn't mean we always should.

In our modern state of earthly affairs, the wisest inventions will be repurposed. The smartest innovations will slow us down. And the best ways to use dwindling resources? Not to.