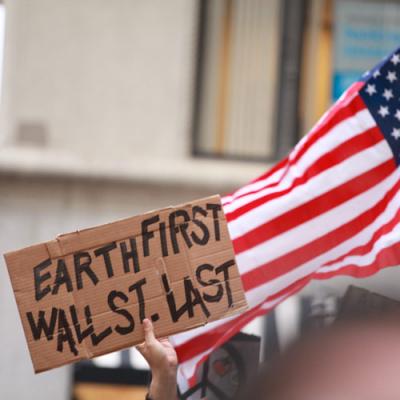 At a recent gathering of my husband's family, we relaxed around a table digesting an abundant dinner and generously poured wine. I sat there placidly, my senses taking in the scene, as snippets of conversation intertwined. Then one thread looped me in.

"Well, I don't want to be an environmentalist," said one man, flatly. "But I do worry about those frogs."

I missed who "those frogs" are, but his disdain for the notion of being an environmentalist caught my attention.

I said this to myself, mind you. I was afraid that saying it to him might lead to uncomfortable confrontation at what was otherwise a genial gathering. So I missed an opportunity to build a person-to-person connection that might've given us both pause next time we feel the knee-jerk reaction of labeling others. This was two weeks before the election that has sharpened the edges along lines of disagreement, and made the bonds between us brittle and tenuous.

Still, I regret what a coward I was.

But interestingly, this man is a farmer whose very livelihood depends on the health of his environment. My guess is that if we'd had a conversation about so-called "environmental" issues, we'd have found a lot of common ground. I'm pretty sure he wants clean air, nontoxic water, and healthy soil. Don't we all?

In a perfect world, there would be no need for environmentalism. But instead, we live in a world – a state – where even doctors must become "environmentalists."

In a perfect world, there would be no need for environmentalism. But instead, we live in a world – a state – where even doctors must become "environmentalists."

As Don Hopey reported in the Pittsburgh Post-Gazette on Oct. 27, "The Pennsylvania Medical Society's 300-member House of Delegates unanimously approved a resolution calling for [a] fracking moratorium." The organization "is urging the state to establish an independent health registry and start studying fracking's public health impacts."

Hopey continued, "Dr. Walter Tsou, past president of the American Public Health Association and the author of the resolution, noted that ... 'growing evidence has shown [fracking's] increasing deleterious effects outweigh any economic benefit.'"

Meanwhile, "The medical society's call for a moratorium came just a day before the release of a new study by the Yale School of Public Health that found numerous carcinogens used in fracking have the potential to contaminate the air and water of nearby communities and increase the risk of childhood leukemia."

One of those carcinogens, incidentally, is benzene – the same substance that the EPA has recently accused Erie Coke Corp. of emitting into our community.

Erie Coke has agreed to pay a "$500,000 civil penalty [to] help end the federal lawsuit," and "to monitor benzene and fix benzene leaks from equipment," according to the Erie Times-News.

Living among corporations like this ought to make environmentalists of us all.

Now that Election Day is over, may we look beyond the yard signs and the -isms toward the things we all want for ourselves, our families, and our community. After months of polluting politics, a breath of fresh air ought to be an easily agreed-upon priority.

Leap Up for Erie Zoo Reopening