Week 9 of Monday Morning Locks will have a different look, as Alex Sibley turns away from the college and professional scene and dives into the local sports scene. 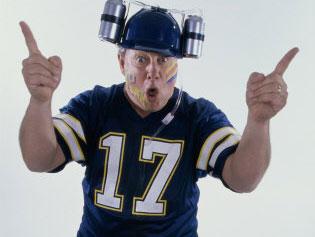 Well, I'd like to thank the New York Knicks and Denver Nuggets for helping me set a new record for Monday Morning Locks – the quickest loss to date.

Last week's edition wasn't on the website for more than a couple hours before the trade went down, sending Anthony and a slew of other players to the Big Apple.

Other than that, the only other loss I had come my way was at the hands of Kobe Bryan and the Lakers, which beat the Oklahoma City Thunder by three Sunday afternoon.

I got away from my philosophy of never betting against Kobe, and it bit me in the keister. And for the third consecutive week, I finished at 3-2, which pushed my overall record to 26-20.

I can't have another 3-2 week; it's driving me up the wall. So, I have to make an adjustment.

Let's change it up a bit for Week 9 of Monday Morning Locks. Maybe this will change my luck.
In previous weeks, I've picked college and professional sports, and have done alright, but not good enough.

So let's see how I do when I pick five locks from the local sporting scene, starting with Wednesday nights clash on the ice at the Tullio Arena

Despite earning his first career Ontario Hockey League win last weekend against the Kitchener Rangers, Chris Festarini still appears to be a year away from being a viable goaltender at the highest level of junior hockey.

It's obvious that the Otters play with a higher confidence when Sadikov is in net. He's a proven goaltender who has been between the pipes for 32 of the Otters' 33 wins this season.

Granted Erie has won every meeting at home against the IceDogs, but the Eastern Conference foe has preyed on Festarini, including scoring six goals in Niagara Feb. 17.

If Sadikov was in net, I'd be saying pick Erie all the way. But with Festarini, you just never know what kind of performance you are going to get.

Lock No. 2 – Cathedral Prep basketball
There is no bigger rivalry in Erie sports than when Cathedral Prep and McDowell meet up, whether it's on turf, hardwood, ice or a wrestling mat, they simply despise each other.

So when the two schools meet Thursday night at Gannon University's Hammermill Center for the District-10 Championship, expect a tough, physical game on both ends.

Prep has had the edge this season, beating the Trojans twice already – one  at the 'Mill and once at McDowell – to claim the Region 8 title.

The Trojans took care of Strong Vincent last week to get their third and final shot at the Ramblers in the most important of the three games. This winner goes on into the state playoffs, while the loser meets on the weekend to hand in uniforms.

The last time these two teams met, Prep's Joe Gnacinski was too much for the Trojans to handle in the post, as collected clutch rebounds and two big baskets down the stretch to secure the Ramblers' win. While people say it's hard to beat one team three times in one season, McDowell just doesn't match up well with Prep.

Lock No. 3 – The Mercyhurst College Lakers
The march towards the Frozen Four begins Friday for the Mercyhurst women's hockey team.

Before the Lakers can start showing the Erie area their talents on the Tullio Arena ice, the site for this year's NCAA Women's Frozen Four, they must take care of business in the CHA Tournament.

Well, not really, the Lakers are a lock for the tourney, but it would be nice to win the conference tournament before heading into the NCAA's big dance.

That shouldn't be a problem, as Mercyhurst went 16-0 in conference play.

The first step in the hunt for the ultimate goal of winning the championship begins Friday, when the Lakers visit Robert Morris in a first-round playoff game.

This team is too talented for anybody else in the conference to compete with, so this is an easy one, take the Lakers.

Lock No. 4 – Villa Maria girls' basketball
If the players on the Villa Maria roster weren't focused on its playoff game against Wilmington, it didn't show.

Just days after coach Scott Dibble resigned, the Victors had to deal with the scrutiny surrounding the program, along with taking the court for the first time without Dibble barking orders, as Doug Chuzie became the new head coach.

With all of those distractions around them, the Victors simply went on the court and played the brand of basketball they have graced the community with the past five seasons – a 73-14 thrashing of Wilmington in the quarterfinals of the Class AA playoffs.

In the past, Villa has played for pride, always striving to be the best team in the area.

Now, they have another reason to play for – Dibble.

He was the face of that program, winning back-to-back state championships in the last two years.

On Wednesday, Sharspville High School will be the next opponent to try and stop the Victors – easier said than done.

They are still the top dog in AA basketball, and now they're angry, and want to win a third state championship for Dibble.

Lock No. 5 – The Erie BayHawks
With the great game that will happen Thursday with the aforementioned Prep-McDowell game at the Hammermill Center, you might want to stop down to the Tullio Arena Tuesday night as two of the best teams in the D-League meet for the tail end of a two-game series.

The Erie BayHawks, the fourth best team in the league, will play host to the D-League's best in the Iowa Energy.

On Sunday, the Energy did what only two previous teams have done this season – beat Erie on its home court. Coming into the game, the 'Hawks were 12-2 on their own turf, while sitting in second place in the East Conference behind Iowa.

They have not lost back-to-back games at home all year, and have played Iowa tough in all of their meetings this season.

The BayHawks are a good team, and good teams don't lose at home. Throw in the adjustments they will make before Tuesday's game, and their a sure lock to win.