From snow removal to art, getting away with the bare minimum. 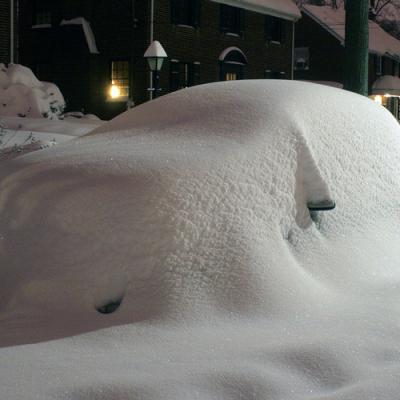 Wired.com's most recent "Absurd Creature" feature shows a toad devouring a larva of a much-smaller beetle, but the "absurdity" is that the larva is in charge and that the toad will soon be beetle food. The larva's Darwinian advantage is that, inside the toad, it bites the hapless "predator" with its hooked jaws and then secretes enzymes to begin decomposing the toad's tissue (making it edible) and provoking it to vomit the still-alive larva. [Wired.com, 1-29-2016]

An 80-year-old man and a 37-year-old woman were ticketed in separate incidents in Canada the week of Jan. 18 when police spotted them driving cars completely caked in snow except for a small portion of the windshield. The man, from Brussels, Ontario, was driving a car resembling a "pile of snow on the road." The Halifax, Nova Scotia, woman's car was, a police statement said, "a snowbank with four wheels." [Globe and Mail, 1-21-2016] [Associated Press via WMUR-TV (Manchester, N.H.), 1-21-2016]

Fed up with the "pretense" of the art world, performer (and radio personality) Lisa Levy of Brooklyn, New York, sat on a toilet, naked and motionless, at the Christopher Stout Gallery in January to protest artists' "BS" by presenting herself in the "humblest" way she could imagine. Visitors were invited to sit on a facing toilet (clothed or not) and interact with her in any way except for touching. Levy told the Bushwick Daily website that too much "ego," "like a drug," "distorts your reality." [Bushwick Daily, 1-20-2016]

In January, the U.S. Department of Justice's inspector general recommended closing down a program of the department's Drug Enforcement Administration that paid employees of other federal agencies (Amtrak and the beloved Transportation Security Administration) for tips on suspicious passengers. (The program apparently ignored that federal employees have such a duty even without a bounty.) DEA was apparently interested in passengers traveling with large amounts of cash which DEA could potentially seize if it suspected the money came from illegal activity (and also, of course, then keep the money under federal forfeiture law). According to the inspector general, the tipping TSA agent was to be rewarded with a cut of any forfeited money. [USA Today, 1-7-2016]

Chiropractor William DeAngelo of Stratford, Connecticut, was charged with assault in January after an employee complained that she was ordered to lie down on a table and let DeAngelo apply electrical shocks to her back as punishment for being the office gossiper, spreading rumors about colleagues. DeAngelo said he was reacting to complaints from patients and staff, but seemed to suggest in a statement to police that he was only "re-educating" the woman on how to use the electrical stimulator in the office's practice (though she felt the need to report to a hospital afterward). [Connecticut Post, 1-29-2016]

Britain's North Yorkshire Police successfully applied to a judge in January for a "sexual risk order" against a man whose name was not disclosed publicly and whose alleged behavior was not revealed. Whoever he is and whatever he did, he is forbidden to enter into any sexual situation with anyone without providing at least 24 hours' notice to the police nor is he allowed to look at or possess any sexually oriented materials. According to the York Press, the order is temporary until May 19, at which time the magistrates may extend it. [York Press, 1-21-2016]

Christopher Lemek Jr. was arrested in Palmer, Massachusetts, in January and charged in a New Year's Eve hit-and-run accident that took a pedestrian's life. Lemek emerged as a suspect a few days after the collision when police, visiting his home, noticed freshly disturbed earth in his backyard. Eventually Lemek confessed to literally burying the evidence using a construction vehicle to crush his truck and an excavator to dig up his backyard and drop the truck into it. [The Republican (Springfield), 1-8-2016]

No Need for a Pre-Nup: The 20-year New York marriage of Gabriel Villa, now 90, and Cristina Carta Villa, now 59, apparently had its happy moments, but as Cristina found out when things went bad recently, Gabriel had attempted to protect himself shortly after the wedding by obtaining a Dominican Republic divorce and keeping it secret. Cristina found out only when she realized in a property accounting that her name was not on the deed to their Manhattan apartment. (She is challenging that divorce as improper even under Dominican law.) [New York Post, 1-24-2016]

Several Connecticut state troopers involved in a DUI checkpoint in September were apparently caught on video deliberating whether to make up charges against a (perhaps obnoxious) checkpoint monitor. Veteran protester Michael Picard, 27, posted the videos on his YouTube page in January, showing troopers (illegally) confiscating Picard's camera and suggesting among themselves various charges they could write up (at least some not warranted by evidence) to, as one trooper was heard imploring, "cover our asses." (The troopers returned the camera after deliberating, but seemed unaware that it had been running during the entire incident.) State police internal affairs officers are investigating. [Hartford Courant, 1-26-2016]

Private Parts: (1) A middle-aged woman reported to a firehouse in Padua, Italy, in January to ask for help opening a lock for which she had misplaced the key. It turned out that the lock was to the iron chastity belt she was wearing of her own free will, she said (because she had recently begun a romantic relationship that she wanted not to become too quickly sexual). (2) Firefighers in Osnabruck, Germany, told Berlin's The Local that in two separate incidents in December, men had come to their stations asking for help removing iron rings they had placed on their penises to help retain erections. (The Local, as a public service, quoted a prominent European sexual-aid manufacturer's recommendation to instead use silicone rings, which usually do not require professional removal.) [Daily Telegraph (London), 1-17-2016] [The Local (Berlin), 12-8-2015]

Few matters in life are weirder than the Scottish love of haggis (sheep's liver, heart, tongue and fat, blended with oats and seasonings, boiled inside a sheep's stomach to achieve its enticing gray color!), and in January, in honor of the Scottish poet-icon Robert Burns, prominent Peruvian chef Mitsuharu Tsumura joined Scotland's Paul Wedgwood to create haggis from, instead of sheep, guinea pig. Wedgwood said he was "proud" to raise haggis "to new gastronomic levels." [Daily Telegraph (London), 1-21-2016]

Briton Jacqueline Patrick, 55, was sentenced to 15 years in prison in December for the 2013 murder of her husband, accomplished by spiking his wine with anti-freeze. To cover her crime, she handed over a note the husband had supposedly written, requesting that if tragedy struck him, he wished not to be resuscitated, preferring to die with "dignerty" (sic). Suspicious, police asked Patrick to spell "dignity," which, of course, came out "dignerty." (2) Kristina Green, 19, and Gary Withers, 38, both already on probation, were arrested in Encinitas, California, in December after an Amazon.com driver reported them following his delivery truck and scooping up packages as soon as he dropped them off. Inside the pair's car, officers found numerous parcels and mail addressed to others plus a "To Do" list that read, "steal mail and shoplift." [Reuters, 11-23-2015] [San Diego Union- Tribune, 12-15-2015]

In October (2011), the super-enthusiastic winners of a Kingston, Ontario, radio station contest claimed their prize: the chance to don gloves and dig for free Buffalo Bills' football tickets (value $320), buried in buffalo manure in a wading pool. The show's host, Sarah Crosbie, reported the digging live (but, overcome by the smell, vomited on the air). More curious was a runner-up contestant, who continued to muck around for the second prize even though it was only tickets to a local zoo. [Yahoo Canada Sports, 10-21-2011]