The Eastern Conference-leading Mississauga Majors had no answer for Ramis Sadikov, who stopped 36 shots in regulation and all three in a shootout to give the Otters a 3-2 win Thursday night. 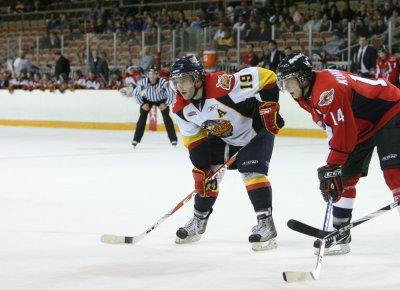 Shawn Szydlowski has proven in his four years that he can stick-handle better than most on the Erie Otters roster.

But on Thursday night, the overage winger kept it simple as he plainly put the puck under Mississauga goalie JP Anderson's blocker for the only goal in the second round of a shootout, as the Otters beat the Majors by a 3-2 decision in front of 2,515 at the Tullio Arena.

Before the goal, Szydlowski got some words of wisdom from a teammate.

"Derek Holden came down and whispered in my ear and told me to shoot low blocker," said Szydlowski, who assisted on Phil Varone's goal in the second period that tied the game at two. "I debated it for a couple minutes, then I got out there and it went in the back of the net."

For the second straight game, Erie found itself down 2-0 after a sluggish start to the game. Devante Smith-Pelly gave Mississauga a 1-0 lead 2 minutes, 13 seconds into the game, while Derek Schoenmaker added his sixth of the season to put the Otters into an early hole. The Otters were equally as bad to start the game against London Jan. 15.

"We didn't play well in the first period, and they took advantage of a couple mistakes," coach Robbie Ftorek said. "You don't want to spot teams goals, especially this team."

The Otters gained a little momentum before the break as Brett Thompson scored his second goal as an Otter off a pass from Holden at the side of the net to make it 2-1. But for the majority of the period, the Otters were back on their heels trying to figure out a way to contain Mississauga.

Despite outshooting the Majors 13-12 in the first, the Otters were in dire need of a spark. Their goaltender took care of that.

Ramis Sadikov would stop all 13 shots he faced in the period before Varone put the equalizer between the legs on a redirect from inside the hash marks for his 19th of the season.

That would be the only score of the frame, as the Otters generated just seven shots on goal. They finished the game with 31.

Both teams would trade punches in the third without finding the back of the net before Erie's Brett Appio was whistled for a hooking penalty, granting the Majors a power-play opportunity for the final 1:46 of the third.

Mississauga swarmed the Erie end and had several scoring chances, but Sadikov remained unbeatable, making nine more saves in the frame, three of while came on the power-play before sending the game to overtime. Sadikov made 36 saves on the night.

And for the second time this season, nothing was resolved in the extra session as each team fired four shots on net before the two squads would decide the outcome in a shootout. Erie beat the Majors 2-1 in a shootout Nov. 7 on the road.

The two goaltenders denied the first two shooters – Varone and Justin Shugg – before Szydlowski ripped his wrist shot into the back of the net, giving the Otters a 1-0 edge.

Maxim Kitsyn, who played in the KHL for several seasons before joining the Majors recently, was the second shooter to face Sadikov. The Russian tried to beat Sadikov on his backhand, but Sadikov wasn't fooled and turned the shot aside.

After forward Anthony Luciani missed for Erie, it was up to Casey Cizikas to keep the Majors alive.
Cizikias took the puck with speed and the center dot, made a move just inside the hash marks, but Sadikov poke-checked the puck before he could get a shot off, sealing the Otters' third-straight victory.

"I think it's just practice," Sadikov said referring to his poke-check. "He was too close with me, so I just poked and said 'see you later.'"

The effort was good enough for Sadikov to be named the first start of the game. In two games this season, Sadikov has allowed just three goals in regulation against the Majors, who have a nine point cushion for the top slot in the Eastern Conference.

Earlier this season, a slow start to the game would have doomed the Otters throughout the game. But this team is oozing with poise right now, as they have won five-of-seven games in January and are three games above .500 for the first time all season.

"We have won some big games lately," Szydlowski said. "We've been playing great hockey for a while now. We're going to be a hard team to reckon with."

Erie holds wins over both of the Eastern Conference's best teams – Mississauga and Niagara – while competing with Saginaw and Owen Sound – the top teams in the west – in every contest this season.

The Otters hold a one point advantage over division rival London in the conference standings, while trailing the fourth- place Windsor Spitfires by four points.

Erie's biggest test of the second half will come in the next five games, all of which are on the road, starting with tomorrow's game against the Sarnia Sting.

The Otters are 10-11-1-0 away from the Tullio Arena this season. Erie won't return home until Feb. 4.
"It's one at a time," Ftorek said. "We have to have out hats screwed on and head to Sarnia, because that's a huge game for us.