The Otters failed to make it four in a row as their comeback attempt falls short in a 5-3 loss. 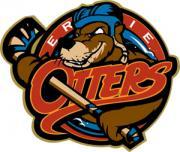 The Erie Otters had no answer for Philipp Grubauer last season in the first round of the OHL playoffs.

The Otters came out of the gates flat and Kingston took full advantage.

The Frontenacs scored twice in the first six minutes before Michael Fine scored his second of the game with five seconds remaining to put Erie down 3-0 at the end of one.

Ramis Sadikov, making his 30th consecutive start in net, was pulled after stopping just six of the nine shots he saw in the period. Erie fired 10 shots at Grubauer in the first period, but none were threating.
"If you're not mentally ready, then you're not going to be shooting well," coach Robbie Ftorek said. "For some reason, we were a little bit high coming off a few wins."

Rookie goaltender Chris Festarini took over in the second and quickly surrendered a power-play goal to former Otter Sean Jones 4 minutes, 46 seconds in to give Kingston a 4-0 lead. It was Festarini's first action since Dec. 11 in Owen Sound.

With his career record at 0-4 and a save percentage of just .78 percent, things appeared to be heading in the wrong direction for Erie, who came into the contest winners of three straight.

But the Otters seemed to find some life after the Jones goal, starting with a Brett Cook blast from just inside the blue line to make it 4-1. Three minutes later Phil Varone slid a puck between the pads of Grubauer to make it 4-2 and give the Otters some much needed momentum heading into final period.

The ice appeared to be tilted in the third. Erie controlled the play in the Frontenac zone and relentlessly fired shot after shot, where many trickled behind Grubauer, but refused to cross the goal line.

Finally, Grubauer was beat, as Cook unloaded once again from the high slot and beat the German goaltender with 6:48 remaining.

Erie was granted a power play with 1:50 remaining, sustained pressure in the offensive zone and continued to crash the net, but Grubauer was too strong between the pipes and refused to let the equalizer behind him.

"I guess we didn't work hard enough," Varone said. "I don't even know what to say right now. It's just disappointing."

The disappointment only mounted as Nathan Moon took advantage of an ill-advised pass and found the vacant Erie net to seal the deal and a 5-3 victory.

It was a letdown for the Otters, who were coming off huge wins against Niagara and rival Kitchener in their last two games, who have religiously faded this season after two big wins.

"We have to be ready," said Cook, whose two-goal performance was the first of his OHL career. "That's always in the back of our minds."

With a team that has been used to losing the last three seasons, finding ways to win is crucial this time of year, especially when the division leader is just eight points ahead with more than two months remaining in the regular season.

"We can't afford to do that, championship teams don't do that," Ftorek said of the letdowns that have haunted the Otters this season. "You have to understand that you have to be ready to play every team for 60 minutes. If you're not secure in the present, then your future could be bleak."

Despite his surprisingly-strong performance, Festarini earned the loss, dropping him to 0-5 on the season. But, considering its been just less than a month since his last stint in net, the 17-year-old held his own, which is something that has been few and far between in his tenure in the OHL.

With the trade deadline coming Monday at noon, it's apparent that the Otters will look to find another forward, but for the time being, this is the team that has to win the important games – and from here on, with the playoff's creeping into the future, all the games are important.

Erie begins a three-game home stand next weekend, starting with the Barrie Colts Friday, and a clash with Midwest Division foe London the following evening.