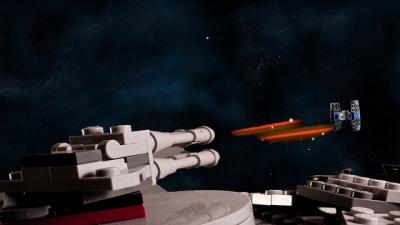 After watching nearly any sci-fi movie ever created, we can all agree that the coolest weapons are lasers, so it should come as no surprise that the idea of laser weapons has become finally real. The U.S. military has been exploring, engineering, and testing lasers for some time now, and currently, the Air Force is considering them as weapons on future fighters and bombers while Lockheed Martin has been working to make them a source of fuel for drones. The U.S. Navy? They just like to shoot stuff with 'em, and recently released a video of themselves doing just that.

As drones continue to become more capable of completing various missions and tasks, their use within military operations has increased as a result. The Navy's solution to handling such enemy drones? Laser guns.  They have been testing Laser Weapons System (LaWS) for a few years, and in the newly available video, viewers get a preview of a six-laser cannon focusing one destructive beam at a target drone.

A Navy spokesperson has advised that the biggest advantage of a laser weapon system is its cost. The laser is estimated to cost only about $1 per shot. This means it's nearly free to operate once built.

After watching the video I came up with a list of problems that I believe may need to be addressed.

2.) It takes a few seconds to burn through its target – I would like to see instant explosive impact.

3.) It's invisible. I want a colored beam. I think red would be nice.

4.) Currently, the laser cannon is too large to fasten to a shark's head.

A Navy spokesperson has advised that the biggest advantage of a laser weapon system is its cost. The laser is estimated to cost only about $1 per shot.  This means it's nearly free to operate once built.  After learning this, I was instantly intrigued as to what the cost of building this weapon might be. As it turns out, it's a cool $32 million.  While this may sound very costly, but you must also take into account that short-range air-defense interceptor missiles can cost upwards of $1 million each.

As far as implementation goes, the USS Ponce, an amphibious transport docking ship, will be the first Navy vessel to be deployed with the LaWS. The new laser will be installed on the Ponce over the next year and is slated to be operational in the summer of 2014.  The Navy plans to use the laser to defend from missiles and other threats within the air.  They predict it may also help to ward off threatening ships and to stop other foreign threats.  The Navy has indicated that eventually the system will also have the capability to stop an incoming missile.

Actual Limitations of the LaWS, which render it useless include:

1.) Effective functionality in bad weather and smoky conditions, which can result in a scattered a laser beam.

2.) Potential targets can protect themselves with special coatings and reflective surfaces.

The video of this demonstration posted by the U.S. Navy is available on YouTube and is linked to this article on the Erie Reader website if you would like to see it in action.  Unfortunately, the video does not feature any audio to better explain the weapon, but it's still a sign that LaWS may not be too far, far away.