by Epic Web Studios
View ProfileFacebookTwitterInstagramYouTubeGoogle+LinkedInRSS Feed
April 18, 2012 at 9:28 AM 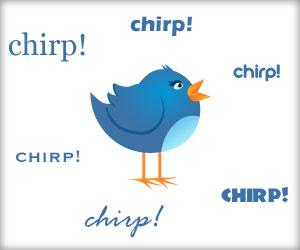 There was an intellectual battle between political opponents during the two #ERdebates on Wednesday and Friday of last week. Both Republicans and Democrats alike fought each other on the issues most relevant to the Erie Area. However, a far more….dare I say it…. "Epic" clash (get it?) was fought between me and my old frenemy…..Twitter.

During both nights, I was charged with "livetweeting" the entire debate. What's that mean? Well, in layman's terms, livetweeting is essentially capturing the vital talking points and moments of interest of an event in 140-character bite-sized pieces. Usually, when livetweeting, a specific hashtag is used. In this case, we used #ERdebate.

Before each debate, I warmed up and prepped like a boxer before his championship match. About an hour or two before, I would make the announcement on both Facebook and Twitter. Then, closer to the start of the event, I'd go set up my workstation and nestle myself in. Located in the corner of the Grand Ballroom in the Masonic Temple Banquet and Conference Center, I was flanked to my left by a 46-inch television that displayed the @ErieReader tweets, and blocked to the right by a wall.

At 7:13 p.m. EST on Wednesday, April 11 2012, @ErieReader tweeted the first official tweet of the #ERdebate when Editor-in-Chief Adam Welsh took to the stage:

ErieReader: ".@adrock303 providing introductions and giving insight into the birth of @ErieReader  #ERdebate  #AndSoItBegins". It's important to note that while most of the time, you're asked to turn your phones/devices OFF during events like this, Welsh actively encouraged people to participate in the debate by having their phones out to make use of Twitter and Facebook.

Wednesday's debate went off without a hitch. Both @Regina4StateRep and @VoteOwen were on Twitter, so I was able to tag each of them appropriately, as well as capture their quotes as best as I could. The livetweet lasted until 8:05 p.m. that evening.

However, I had no idea what would be in store for me on Friday. The livetweet began at 7:11 p.m. EST with this tweet:

Everything from that point seemed to be going great. Unfortunately, not all of the Senatorial Candidates were on Twitter, so I just used their names instead of Twitter handles for equality's sake. However, at 8:08 p.m. EST, tragedy struck. I was shut down by Twitter. Apparently, the Erie Reader account had surpassed its allotted "tweets" for the day, and was thus shut down for the day. The Erie Reader had defeated Twitter by surpassing its expected limit of Tweets. Flooding Twitter with information, questions, quotes, and thoughts, we reached Twitter's imposed limitations—an impressive feat itself—but in so doing had created a brand new problem: How to finish the livetweet?

The answer? Set up a brand new Twitter Account. So I created a new Gmail account to validate      @ErieReader2, and continued to tweet from that. At 8:12 p.m. EST (only 4 minutes later), I started tweeting again with the next question, which actually came directly from Twitter:

ErieReader2: "Q: Why are you better than everyone here? You all sound the same.#ERdebate"

All in all, the #ERdebate was a great way for people to get involved in the political process right from their smart phone. And with the event being LiveStreamed directly to Facebook, all the Slactivists in the World—or at least Erie—had the chance to take part.

Thanks to the Internet, and specifically social media, politics has changed forever. Now, if you have a question for any of the candidates that weren't asked during the debate, just post them on their Facebook page or Tweet it at them. If the representative you want to ask a question is not yet using the most of social media, encourage them to create an account so that they can interact with you, the voter. Remember, the most important idea in social media is "authenticity." Candidates should open themselves up to new audiences by using social media to their advantage; hopefully, we can continue to use this as a contemporary means for engaging those hoping to represent us so that we elect the best representatives and get Erie moving on the right track.

As for me personally, I'm already training for the next #ERdebate, regardless of how many Twitter handles I may need to get the information out to you.