Laurie Urraro recognized potential in Joel Quiggle. Currently his solo exhibition is being hosted by the Urraro Gallery. And Luke Gehring had a chance to review it. 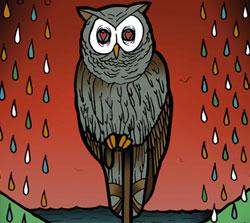 Having been in a number of local group shows, Joel Quiggle is not an unfamiliar name. Recently, Laurie Urraro, recognizing his potential, contacted him with the opportunity to have his first solo exhibition hosted by the Urraro Gallery. His pieces have a strong presence individually, which is only intensified by seeing two floors of his work.

The show can roughly be divided into three sections. The oldest work is on the second floor, paintings he did at Penn State University, where he got his BFA. Necessity of the commute to school kept these canvasses relatively small. In class, he was given assigned elements of painting to work on using whatever imagery he chose. This led inevitably to expressions of his personal faith.  Here are such subjects as the plagues of Egypt, ?The False Prophet,? and even Bible verses, such as Matthew 27:52-53, which Mr. Quiggle uses as spring boards for his painting. What characterizes much of this work is bold outline and bright, flat color elements, which continue in much of his more recent work.

What I found the most compelling was his ?Umbrella Series? of prints. Here I am going to part with my usual stand against Giclee prints to some extent.

Usually a Giclee print is the result of an artist handing over a painting to a printer who reproduces it in print form; as opposed to a lithograph, intaglio print, wood cut, or other legitimate print medium that serve as an extension of drawing. In traditional printmaking the artist actually produces the printing plate, inking and printing the image him or herself.

This collection of Giclee prints fall somewhere in between, with Mr. Quiggle making the image using a Sharpie pen, scanning it into his computer, adding and manipulating the color with Adobe Photoshop, and sending the resulting image to ?the guy in Georgia? to run a very limited edition of prints. From that standpoint, this is much more like traditional print making than the usual Giclee, and they are the original works rather than a copy of something else. The prints are bold, quirky, and whimsical with an incredible color sense. They range from ?Solitude,? an owl perched on the handle of a floating, overturned umbrella, and the tender ?Turtle Love? to ?Legs? with a chorus line of?what the heck are those creatures anyway?

His newest series of paintings gives the title to the show: the ?Southpaw Curse.? This refers to the fact that many boxers historically refused to fight with left-handed opponents because they naturally tended to block a right punch leaving them unwittingly open to a left jab.

The paintings come from the need to go big after being confined to smaller images in college, as well as to operate in a more spontaneous way than the college work would allow. There is a dose of Andy Warhol?s influence thrown in. The beginning point here is vintage, posed, photos of boxers. He made large-scale prints of them, glued them to Masonite, and then began to manipulate and paint over them. Mr. Guiggle often uses a background element, which identifies each as part of a series?polka dots, rain drops, or in this case stars. The stars give an ?all American? feel to the pieces, but are also appropriate as a boxer, when hit in the head, is said to ?see stars.?

One of the pieces, ?Space Race? illustrates both the spontaneity and the humor of the artist. In the 1960s the U.S. and the USSR were engaged in a competition to conquer space. Here the Soviet boxer, in a generally implausible space suit, is fighting mad, having gone all the way to the moon only to find that the U.S. got there first. The theme suggested itself when the grey ground plane in the print reminded the artist of the moon, and his imagination took off from there.

A word of caution to the potential buyer; these are experimental pieces and the choice of medium is not archival. The acid in the Masonite will eventually destroy the paintings. Many collectors take the pragmatic view that a work of art need not be permanent, and so this will not bother. But if you are looking for something to pass down as an heirloom, this series is not for you.

They are however a striking (no pun intended) experiment, a transition indicating more interesting work to come.