You Ought to Know: Jeremy Galante

From working on "Sesame Street" to doing animation for They Might Be Giants, Jeremy Galante is someone You Ought to Know.

by Leslie McAllister
View ProfileFacebookTwitterRSS Feed
July 10, 2013 at 9:00 AM 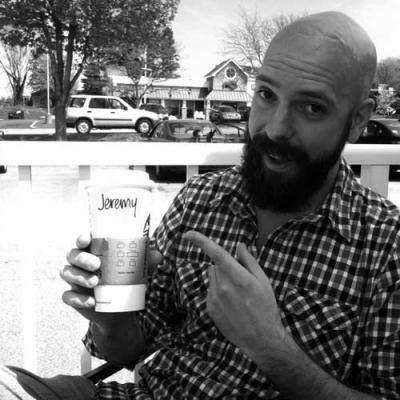 I mean, sure, we get to see the finished product of silly cartoons and wonderfully created animation, but what's going on behind all the vibrant color and liveliness? Early sequential art and the illusion of movement can be dated back to hieroglyphics and even the pottery of ancient Greece. Some may contest that it's magic and wizardry. Well, it is, in a sense. Swipe the wand out for a mouse pointer and "Click!" – your masterpiece is before you. Sadly, it's not that easy. If it were, we would all be animators in one way or another. This art takes time and patience. The painstaking task of moving an object just a little, capturing just 1/24 of a second each time, and then making it lifelike calls for the patience of Job.

A native of Chagrin Falls, Ohio – home to acclaimed cartoonist Bill Watterson, creator of "Calvin and Hobbes," and Pixar's Lee Unkrich, director of "Toy Story 3" – Galante received his degree from Miami University (the one in Ohio – not the one in, well, Miami). As a studio arts major, he became intrigued by the development of his paintings, playing with time lapse photography, and thus, considered animation.

He later enrolled in Rochester Institute of Technology to earn his MFA in film and animation. Through a friend at RIT, he was introduced to David Cowles, whose art you may recognize from publications like Rolling Stone, Entertainment Weekly, Newsweek, TIME, and countless others. He would do caricatures of rock and pop stars, dignitaries, and celebs in Picasso-esque, boldly colored abstracts.

Galante recalls his first meeting with Cowles."I recognized his work from reading these magazines over the years," he says. "We had a pretty immediate connection."

Cowles had a working relationship with the quirky alternative band They Might Be Giants and quickly pulled Galante in on two videos for the Grammy-nominated "Here Comes Science" children's album.

"David and I would brainstorm ideas; he would sketch out the storyboards and designs, and then I would begin on the animation," he tells me over coffee at the local Starbucks.

After graduating from RIT, Galante took a job back in Cleveland with American Greetings, where he designed and animated e-cards. "I was searching for the next step. Then I saw the opening at Edinboro University and jumped at the opportunity to teach at a school with such a comprehensive and renowned art program."

The partnership with Cowles continued to grow. "David and I share the desire to keep creating, even when we're not making any money on a short film. It's just in us. Doing the TMBG work was new and fun. We usually have about 2 to 3 months for every project."

For their collaged video, "Icky," on the latest album, "Nanobots," they built a picture library of places and people, two of whom happen to be my guy and me.

"They were photos of friends, random street props, and we even snuck in things like my parents' cottage on Chautauqua Lake. I animated it in Flash and After Effects, simulating a puppet look, which is what we do for a lot of their videos," Galante tells me on animating TMBG's videos. "The Internet's a great tool. We get immediate feedback and an instant audience."

Another feather in his cap is "Sniffles," a personal favorite about a comic dog that loses his nose. The dog chases after it, hoping to be reunited with it, as the viewer gets to go along for the journey with Sniffles and rejoice in the anticipated union of dog and said nose.

"'Sniffles' was definitely a new style for us. During production, we jokingly asked my friend's 5-year-old daughter what the dog's name was. She instantly came up with 'Sniffles,'" Galante laughs, remembering fondly.

Cowles' talented daughter, Alison, wrote the score for the animation. "Their whole family is gifted as you can imagine. It's great to get so many people involved," he says to me on a bustling Saturday, basking in the sun. Then came along America's adored "Sesame Street," a favorable break for Cowles and Galante.

"They emailed me out of the blue. I guess they were looking for new directors and animators to pitch ideas. I immediately contacted David and we got to work," he shares about the project. We are all familiar with learning the alphabet through the trusty animations of our beloved "Sesame Street," now Galante and Cowles had a chance to bring that charm to the letter "U."

"We pitched some ideas, and they liked our take on the letter," Galante states. "A few months later, we were asked to pitch a few more, and wound up making four total. One was on in March, and I think the rest should be airing this fall. Looking back on everything, I could probably attribute most of my freelance success to working with David," he warmly expresses as he leans back in his chair.

With all the abundant exposure to excellent projects and animating adventures, Galante's main gig is still teaching animation at Edinboro. "Teaching animation while producing it is the perfect combination. Educating is my primary focus. I get to meet aspiring animators and then watch them succeed in the industry. It also expands my professional network and helps to keep me in the loop. I get to be on the inside, watching and nurturing all of the emerging talent."

We also discussed his new business, Sandpiper Animation. "Terry Smith, Dean of College of Arts and Sciences, spearheaded the 'StARTup Incubator,' which helps students and local artists create a business. This benefits students by creating internships, while also bettering the local economy," Galante informs, citing Digiguin, Basement Transmissions, and Sandpiper Animation as recipients of such service.

So what's the palette over the next five years for this fearless animator?

"I'll be on a tropical island somewhere," he laughs. "No, seriously, I want to stay active. I have a very busy summer coming up, which I'm looking forward too.

"After spending so much time on the computer, I need to improve skills that have atrophied, like drawing and painting. I also want to advance my design sensibility," he modestly proclaims, pulling out his computer to share some cool new shorts in the works. "I want to continue gaining momentum, not stopping, staying busy, creating new projects and ventures, working with friends," Galante articulates, adding that he has a fear of stagnation.

It's evident that Galante won't be stopping anytime soon – this gentleman is constantly in motion. Be sure to keep your eyes out for Galante's upcoming shorts on "Sesame Street," as well as an animated commercial for the campaign Truth – helping to see the "ick" in cigarettes.

For more information and to watch the animated shorts go to www.sandpiperanimation.com and find Sandpiper Animation on Facebook.

by Nate Steis5/7/2020, 11:34 AM
Tracking the McDowell and Edinboro grad from softball to her doctorate

by Nick Warren9/25/2019, 11:45 AM
Art Department commemorates occasion with year-long schedule of events