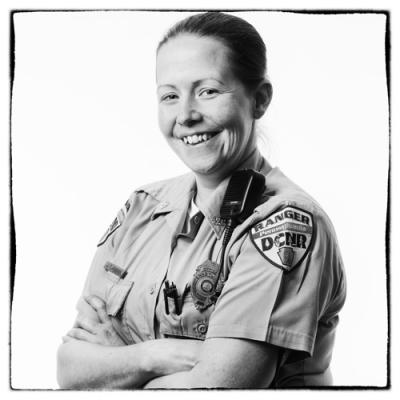 "We are outdoors dealing with whatever situation comes up."

Ed Bernik: When you were 18 years old, did you say to yourself, "I want to be a park

Jill Flanagan: I always knew I wanted to be a police officer. However, I started out in the U.S. Air Force at age 18 as a medic. When I returned home from the military, I worked in the social services field at Erie Homes for Children and Adults. I also worked at Sarah A. Reed Children's Center. After that, I decided I wanted to follow through with becoming a police officer.

EB: What was the spark going into the Air Force?

JF: It was really that I am a strong person who was supporting the U.S. It was more of a drive of what I can do for my country. The Air Force definitely appealed to me because they had a higher education requirement. The USAF wants their people to push themselves 110 percent and excel at everything they do, which was very appealing to me.

EB: How did you become a park ranger?

JF: I took the Pennsylvania State Civil Service Exam for Park Ranger II, and attended the Act 120 Municipal Police Officer training at Mercyhurst North East which is required for all DCNR park rangers. I also attended Edinboro University of Pennsylvania and have a bachelor's in individualized studies with chemistry, biology, and criminal justice. Park rangers are required to

have 15 environmental credits. After being hired by the Pennsylvania Department of Conservation and Natural Resources (DCNR), I attended new ranger training where we are taught rules and regulations.

EB: Are you originally from this area?

JF: Yes, and I graduated from Girard High School.

I don't know if there is a typical day because our job is really weather dependent. When it's sunny out, we can at times have up to 55,000 visitors at the park. We are going from the time we walk in until the time we walk out.

JF: I don't know if there is a typical day because our job is really weather dependent. When it's sunny out, we can at times have up to 55,000 visitors at the park. We are going from the time we walk in until the time we walk out. It can be anything from assisting people to informing our visitors of ways they can enjoy the park and activities. It's really a mixed bag. Unlike other municipal departments, we never deal with the same people. Every situation we run into is different when it comes to the law enforcement aspect. As park rangers, we enforce the Pennsylvania criminal code, the vehicle code, Game Commission rules and regulations, Fish Commission rules and regulations, and DCNR rules and regulations. We are outdoors dealing with whatever situation comes up.

And, we are police officers. We have to address things like theft, assaults, public drunkenness, speeding, traffic accidents, domestic disputes, and driving under the influence.

JF: Yes. For example, last year a man clipped a bicyclist with his waterski being transported on a trailer because he was in a really big rush to get by him. It was a group effort of myself and the lifeguards to treat the bicyclist's injuries. In another incident, there was a young woman with special needs who got separated from her family. A park visitor flagged me down and we found her family. They were very grateful that we found their daughter.

EB: Do you folks work with the Coast Guard?

JF: We do a lot of rescues together. For instance, if we have people like ice fishermen fall through the ice. That's a big one.

EB: That must get the adrenaline going.

JF: It does, it's different. West Lake Volunteer Fire Department and the Coast Guard have air boats and other things they use to go out onto the ice. We have only a limited amount of time when the water is 32 degrees.

EB: What do you do in your spare time? What are your hobbies?

JF: I don't think I have any (laughs). But I do enjoying baking and cooking. My middle son plays cello and goes to the YMCA. My daughter is in ROTC at McDowell Intermediate, so there are drill competitions. My youngest son is in the gifted program at Westlake and has activities with that. So with all that, the only other time I get is to go walking with my dog who is a Pit Bull mix.

EB: So do you have a good story to tell us?

JF: I had a woman and her five children come into the ranger station. She was reporting a man that she confronted breaking into her vehicle at Beach 11. After confronting the man, she also provided us with his vehicle information. Because of her bravery, we were able to convict him of her incident as well as three other thefts he committed in the park. I give her a lot of credit for what she did, especially since she had her four children and nephew with her all under the age of 10.