by Cory Vaillancourt
View ProfileFacebookTwitterGoogle+RSS Feed
July 18, 2013 at 11:42 AM 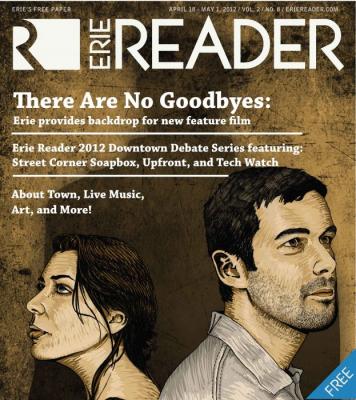 There are no Goodbyes

You know the story by now. Or at least, you should, with all the buzz that's been generated.

"There are no Goodbyes" is a locally-shot independent film by 2013 Erie Reader 40-under-40 alum John C. Lyons; the story of the movie was featured in April 2012 Erie Reader cover story by Alex Bieler, and multiple screenings of this flick have taken place throughout the region over the past year.

The movie follows Oliver (Matthew King) – a rudderless and lonely young man – as he somehow becomes part of mysterious stranger Fenris' (the excellent Frederick Williams) suspicious schemes. Complicating matters, Oliver begins to fall in love with beautiful young photog Raina (Jennifer Hooper), leading him to question the eternal struggle between fate and free will, and his role in Fenris' life. Many scenes in the movie feature landmarks well-known to the people of Erie; even more, the way the film is shot captures not only the look of a smallish, post-industrial rust-belt town, but also the feel of it.

If you still haven't seen "There are no Goodbyes," Lyons has good news for you – finally. If you visit www.ThereAreNoGoodbyes.com, you can rent all 94 minutes of the movie, streamed straight from your glowing rectangle to your face in HD, for just $3.99. That's like 4.2 cents a minute!

If you really like "There are no Goodbyes," you can own it for life for just $9.99, which, depending on how long you actually live, could be a great deal for you.

And if you really, really like "There are no Goodbyes," you can buy the limited edition extended cut – there are only a thousand of these in existence, people – for $21.99.

But if you're one of those not-so-sure types, you can watch a preview of the film on the site for free, because Lyons is just that kinda guy, and he's convinced that once the 60-second trailer ends,  you won't want to say… "goodbye."

Film Grain: Dinner and a Movie

by Nick Warren4/3/2017, 11:16 PM
Pulling few punches, a new collaborative video offers a realistic look at our city's future. Entitled "This is Our Erie," the video was produced as an honest response to a national statement.