The fruits of their labor 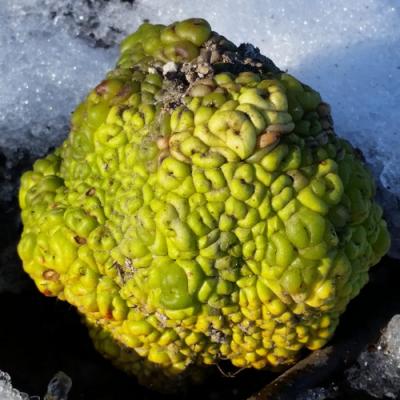 New Year's Day dawned bright and clear. Remember? It's hard to, now that winter's skies have written into history their own 50 shades of gray. But on that gleaming day, the sun shed the shroud of 2016 and allowed us all to believe – at least in terms of vitamin D consumption – that 2017 would be a big improvement.

Craving wide open spaces and (mostly) unencumbered views, we drove out to a road near the old Gudgeonville Bridge, parked the car, and started walking. Soon, we had company.

"Happy New Year, neighbors!" exclaimed a man leaning out his truck window, slowing down to greet us. "Oh! You looked like the folks who live here," he then corrected, gesturing toward a farmhouse that sat distant from the slushy dirt road we walked. Instead of pulling off, he introduced himself, idling nonchalantly in the middle of the road.

Our local historian told us that his land had belonged to his family for 110 years. And that – though just 67 – he'd been in the last class to come through a nearby one-room schoolhouse with a potbellied stove and an outhouse.

I thought about how little I really know about the place where I grew up, let alone about its former inhabitants. What were their private griefs, and public worries? What kept them awake at night? Or when sleep was restful, what did they dream about?

Soon he bade us farewell, driving over a muddy knoll and out of sight. As we walked on, I thought about how little I really know about the place where I grew up, not far from where we walked – let alone about its former inhabitants.

What consumed their thoughts, as they moved through their alternately mundane and heroic lives?

On these things I ruminated. Until we spotted a fluorescent green grapefruit-sized brain in the leftover snow on the road side of the ditch.

"What the heck is that?" we both asked, our incredulous voices piercing the quiet country hum.

Back home that evening, I asked Google, "What is the green brain fungus thing under trees in Pennsylvania?"

Google – with the enduring patience of a thousand angelic moms – showed me photos of the Osage Orange tree's fruit (which are apparently sometimes called "Monkey Balls").

Of course, the metaphors are gimmes here: Our region is full of wonders, if we'd only truly look; slower journeying through life reveals what rushing never can.

And Mother Nature has an inexplicably wacky sense of humor. That one's for certain.

Clichés aside, I've thought a lot about that weird green brain – especially about which homesteaders planted it. And also about the neighborly man's family, stewarding that land for so long.

Surely, they thought their problems were insurmountable. Surely, they suffered moments of utter despair. Surely, they wondered how they'd ever find the strength to persevere.

History is often discussed in such an imposing, distancing way – as if it only happened to the important people and their most unfortunate subjects. So it's easy to forget the day-to-day lives that actually came before ours. All those who walked our streets and lived in our houses and tried to do their best with what life had dealt them.

It's comforting to think of them now, and the wisdom they've embedded in us. Maybe some of their sensibility remains in our landscape, waiting to be absorbed by our wandering selves. Maybe that wacky fruit really is brain-like.