Water brings life to Death Valley (and all of us). 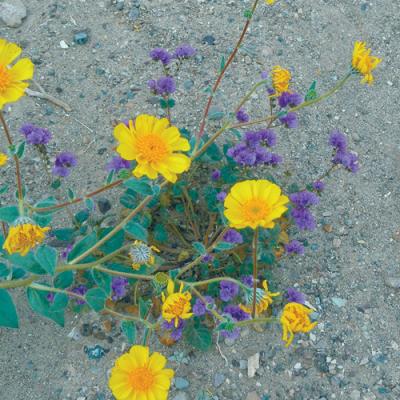 I've just returned to Erie from a visit to the California desert, where Death Valley National Park is in the midst of a "super bloom" – a once-per-decade or so phenomenon that brings long-dormant wildflower seeds bursting to vibrant life.

Extracting metaphors from the desert is almost too easy, like painting by numbers or consulting a Metaphors for Dummies book. Plants grow in little communities, unabashedly dependent on one another for shelter and survival, and able to slow their growth in humbling lean years.

Most obvious both metaphorically and in reality, though, is how usable water creates the singular conditions for survival.

As we drove into Death Valley this time, rolling hills and roadside ditches that previously appeared barren were awash in wildflowers. From a distance, it looked as though a painter had highlighted the contours of hillsides with dandelion yellow, brighter in the fetching curves where two hills meet. Even flowerless hills glowed green in the desert sunlight.

Incidentally, the same autumn floods that created this super bloom washed out the road south of Badwater Basin, the lowest point in North America, and made the eccentrically built Scotty's Castle unvisitable by tourists.

In short: What humans made was destroyed, what nature makes flourished.

Resilient as always, nature adapted. It didn't debate about what caused the flood, or who is to blame, or who should pay for it. It did not waste the extraordinary bounty of fresh water it was lucky enough to acquire, free and clear. Instead, nature reacted in the only way that makes sense, given the rarity of such a gift: it bloomed.

Resilient as always, nature adapted. It didn't debate about what caused the flood, or who is to blame, or who should pay for it. It did not waste the extraordinary bounty of fresh water it was lucky enough to acquire, free and clear. Instead, nature reacted in the only way that makes sense, given the rarity of such a gift: it bloomed.

Blooms also abounded across the Mojave in Joshua Tree National Park, in breathtaking variety and color. Throughout the park, informational signs described the ways of Native American tribes who made their lives there for hundreds of years. In fact, the Joshua Tree area – deemed barren and uninhabitable by early white surveyors – has actually supported human life for at least 5,000 years, according to the National Park Service.

So clearly, humans know how to adapt, too.

It's startling to realize that the human/nature dichotomy we've grown accustomed to is really a relatively recent construct. These tribes would undoubtedly not have understood how or why we humans could make sense of our existence as apart from nature, given the indisputable fact that we are completely dependent on the natural world – and especially water – for our survival.

They would have felt, presumably, that nature is thus not something for us to "save" if it aligns with our political beliefs to do so. We are nature.

Who would subscribe to political beliefs that encourage self-destruction?

On the day we returned to Erie, the air was thick with springtime fog. Fields held standing water, and creeks flowed fully.

The difference was striking.

In this obvious land of plenty, it's easy to become complacent about the abundance of fresh, clean water.

But if we are to survive locally, we must do everything we can – even if that means adapting – to protect our own enormous gift: our Great Lake.

Without it, none of the collaboratives, or comprehensive plans, or development strategies, or creative entrepreneurship we value can bloom.