Two-wheeled travel through our soulful surroundings. 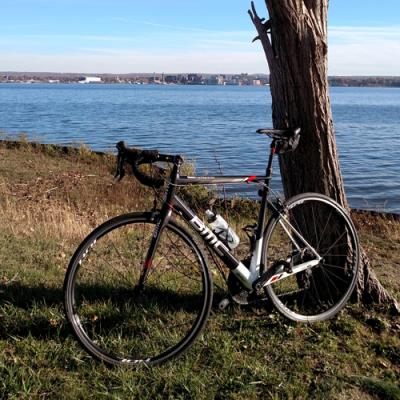 This Easter Sunday arrived as an indisputably sublime day. Shimmering, uninhibited sunlight, a sky supersaturated with blue, and warmth that drew even the most indoorsy folks outside, pale forearms bared and eyes squinting with delight against the incandescent sun.

Wherever you were in this water-kissed region of ours, if you were outside, you'd have been hard-pressed not to get an eyeful of loveliness. And with a long, post-brunch afternoon ahead of us, my traveling companion and I chose to take in a wide swath of that beauty on bikes.

We headed southwest along back roads, framed by fields of cover crops not yet plowed under to enrich the soil for summer. Farther out, chickens wandered freely, and children – having already hunted for pastel plastic replicas of eggs – chased each other through beams of dappled sunlight.

Willows wore the freshest green of the season, an almost fluorescent lime cast that shone against the dark, still bare skeletons of surrounding trees. The color screamed, "Spring! Life!" as if to urge us on.

Eventually, off of Route 98 and south of I-90, we flew down the hill on Gudgeonville Road toward where the legendary covered bridge of the same name stood until arsonists burned it in 2008.

Eternal Elk Creek still flows clearly below the now-basic bridge, and the elderly sycamore whose roots are exposed like a cross section holds fast to the bank. Gray shale slopes rise from the creek as dramatically as skyscrapers from a concrete sidewalk.

Transported by another bike, in another era, I whiled away hours next to that bridge, trying to make sense of the ceaselessly perplexing days that were high school. Maybe I hoped I'd absorb some perspective from that stalwart wooden structure, built in 1868 by now long-deceased hands. I always knew the area was supposed to be haunted, but I was too haunted by worrying about what to do with my future to notice.

Back then, the bike was my source of freedom, both physical and mental. Still is.

Ours is a landscape teeming with life, fecund and fresh, yet aged and experienced. It doesn't wear the "Look at me!" drama of the Rockies or canyon country. But layers of wonder await the attentive eye.

Riding on from Elk Creek, surrounded by spring's birds getting on with their song and dance, I recalled the blissful bike rides of my youth, and how the bike is, in many ways, transport perfected. Such a simple, pure machine. Such a perfect vehicle for appreciating one's surroundings, and for traveling at a pace that doesn't feel like you're covering miles faster than your mind can wander.

The glaciers responsible for carving this landscape moved with a steady slowness we'd do well to emulate. Ours is a landscape teeming with life, fecund and fresh, yet aged and experienced. It doesn't wear the "Look at me!" drama of the Rockies or canyon country. But layers of wonder await the attentive eye. The earth here feels settled and soulful, and it's easier to sense its depth when you're gliding along at a speed more aligned with the rhythm of natural life.

If you've forgotten what that feels like, situate yourself between a helmet and two unmotorized wheels as soon as you can. Freedom awaits.

Open Land in the Plans