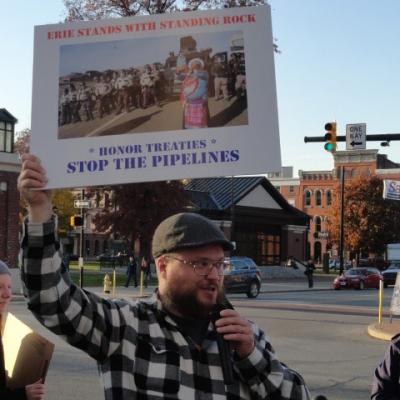 One young woman holds a homemade sign that reads, "I stand with Standing Rock #NoDAPL" in black marker. She's made creative use of a frozen dinner box, unsealing its edges and writing on the plain cardboard side.

A girl, still in her school uniform, stands on one of the concrete planters that line South Park Row and State Street in downtown Erie. Her tireless arms support a sign that reads, "Is not water more important than oil?" Though she's probably a little young to understand the full gravity of this event, her eyes squint against the sun in fierce conviction that what she's doing is of critical importance.

It's Tuesday, Nov. 15, and we're gathered as part of a global day of action against the Dakota Access pipeline. Over 300 vigils are being held worldwide today, to recognize this assault on indigenous rights.

Speakers pass a mic. One woman reads a list of U.S. pipeline failures – just in the last two months – which have killed and injured people or contaminated water sources. When she flips the page she's reading from, I stop counting.

According to Time magazine, the Dakota Access Pipeline "would travel underneath the Missouri River, the primary drinking water source for the Standing Rock Sioux … Builders of the pipeline insist that they have taken extraordinary measures to safeguard against disaster, but opponents point out that even the safest pipelines can leak. The Pipeline and Hazardous Materials Safety Administration (PHMSA) has reported more than 3,300 incidents of leaks and ruptures at oil and gas pipelines since 2010. And even the smallest spill could damage the tribe's water supply. The Standing Rock Sioux also argue that the pipeline traverses a sacred burial ground. And while the land being used for the pipeline is not technically on its reservation, tribal leaders argue that the federal government did not adequately engage the Standing Rock Sioux during the permitting process – a requirement under federal law."

Incidentally, as the Bismarck Tribune reported, "An early proposal for the Dakota Access Pipeline called for the project to cross the Missouri River north of Bismarck, but one reason that route was rejected was its potential threat to Bismarck's water supply, documents show."

In Erie, it's been a clear, unseasonably warm day. But at sundown, it's growing cold. After an hour – the length of this vigil – my hands and feet are freezing, and I'm imagining how spicy I'll need to order the Japchae at Like My Thai to warm me up from the inside out.

I'm ashamed of these thoughts, but awash in physical empathy. In North Dakota, water protectors have been holding vigil for months, and will continue to do so as temperatures plummet.

Lately, though, the situation's urgency has escalated. President Obama's final days are seen as a last chance to halt the controversial pipeline, as Donald Trump "has between $500,000 and $1m invested in Energy Transfer Partners, with a further $500,000 to $1m holding in Phillips 66, which will have a 25 percent stake in the Dakota Access project once completed," according to The Guardian. Trump also "receiv[ed] more than $100,000 in campaign contributions from [Energy Transfer Partners'] chief executive."

Making America great again clearly will not apply to Native Americans, to whom the rest of us are all immigrants.

Of course, even this Erie gathering, populated by human rights and environmental justice advocates young and old, is backlit by hypocrisy. For one, many of us drove here. Using oil. For another, places in our own region – including school districts – are named after displaced tribes.

I want desperately to live in an America that admits to its ongoing ignorance against those whose ancestors predate European "discovery." Admitting you have a problem is the first step toward recovery. But even in the 21st century, we're reluctant to take it.

I want desperately to live in an America that admits to its ongoing ignorance against those whose ancestors predate European "discovery." Admitting you have a problem is the first step toward recovery.

But even in the 21st century, we're reluctant to take it.

Being unable to purely live in concert with one's ideals is nothing new in modern life. But as numerous disenfranchised groups face increasing prejudice and oppression in the coming administration, efforts to align action with ideals are bound to increase, too. Even gestures, like this one being made by thousands worldwide on this day, feel powerful.

In a Yes! Magazine interview on Nov. 9, Sarah van Gelder asked Standing Rock Tribal Chairman Dave Archambault II why he thinks this issue has attracted so much global attention.

"It's very basic and very simple," Archambault explained. "Water gives life to everything that has a soul or a spirit. And if you're standing up for water, there's a lot of people that will stand beside you."

by Nick Warren1/1/2020, 11:30 AM
Impressive albums from area musicians you might have missed