After a busy 2011, Ron Yarosz and The Vehicle looking to keep things rolling with a show at The Brewerie at Union Station Friday, April 20. 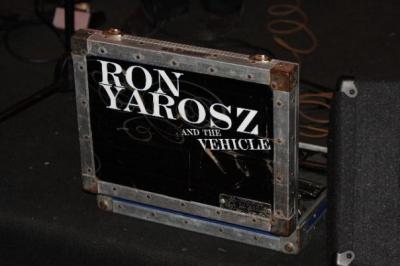 2011 was a good year for Ron Yarosz and The Vehicle. After the release of "Tulips on My Organ," an 11-track album comprising of six new tracks and five re-released favorites from previous records, the band took home six trophies at the Rock Erie Music Awards, nabbing top prizes for Best Album, Best Blues Band, Best Guitarist, Best Bassist, Best Keyboardist, and Essential Player.

Quite a haul for a single band, but when you take the collective talents of Ron Yarosz, Eric Brewer, Ralph Reitinger, and Ron Sutton, it's not undeserving.

With just under a third of 2012 gone, the musical magic just keeps going strong for the blues rockers. In February, the group competed in the International Blues Challenge for the second straight year after winning the Cleveland Blues Society's Memphis Challenge. While The Vehicle will keep chugging along without all the praise, the group can appreciate the extra attention.

"It's nice to be recognized after plugging away through all the years," Yarosz said.

Now back in Erie, the good times will continue at the Brewerie at Union Station at 9 p.m. Friday, April 20.

The past year has been very kind to The Vehicle, sure, but the band isn't new to the scene. Yarosz first dragged his Hammond B3, a 565-pound organ, onstage with The Vehicle back in 2003, but the love of blues was instilled into him long before that.

"That was the music that really spoke to me," said Yarosz, who has been playing blues since back in the mid '90s. "I grew up listening to classic rock and all of those bands really drew from blues. It was like researching backwards. I discovered blues kind of backwards through rock history."

After different members shuffled in and out of the band, the current lineup has been playing together for the past three years, developing their own mix of the genre.
"We're kind of a jam band at heart, but we play blues," Yarosz said. "We're blues for the 21st century."

Whatever you want to call it, the band's style is hard not to notice. With a combination of the group's top-notch performers and the only Hammond B3 being hauled around to live shows in the area, The Vehicle's sound definitely grabs you by the collar. Sutton (on drums) and Reitinger (on bass) provide a veteran rhythm section to the group, while Brewer, frontman of master jam-band Eric Brewer & Friends, puts on an a stunning display on guitar.

While his three compatriots rock out behind him, Yarosz switches off between his trusty harmonica, soulful vocals, and his trusty B3.

"You can't beat the sound of it," Yarosz said. "It's pretty high energy stuff, which makes it a lot of fun for us, as well as keep the crowd dancing."

Now that the group will be back at the Brewerie for the first time in years, you should make the drive for The Vehicle and let the blues put a smile on your face.