Three albums, three reviews, one writer. Here's what you'll be listening to. 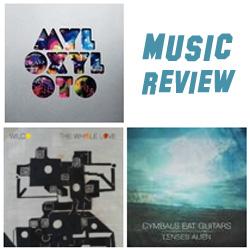 Coldplay – "Mylo Xyloto" – 3/5 stars
Three years after releasing "Viva La Vida or Death and All His Friends," Coldplay returns with another Brian Eno-aided effort in "Mylo Xyloto." Like its predecessor, "Mylo Xyloto" contains an entire album's worth of catchy tunes, filled with sonic landscapes and sparkling guitar riffs. This time, however, Chris Martin and the gang build the entire album around the story of two lovers in a dystopian future. Apart from the concept, the band doesn't really dish out anything we haven't heard before. Where "Viva" would still bend stylistically, "Mylo" continues churning out sugary synthesizer-laced songs. Not bad, but nothing particularly exciting.

Wilco – "The Whole Love" – 4.5/5 stars
After seven albums, it's difficult to expect a band such as Wilco not to rehash what they've done before. Krautrock-styled stomper? Look to 2004's "A Ghost is Born." Catchy indie-pop? 1999's "Summerteeth" should be good for that. Alt-Country on acoustic guitar? Check out the band's mid-'90s releases. Wilco's eighth studio album, "The Whole Love" doesn't contain any styles the band hasn't tried before, yet it still manages to stay fresh. Singles "I Might" and "Born Alone" provide a pop-punch that continues to reward with successive listens, as well as album opener "Art of Almost," which writhes along with Nels Cline's spastic guitar. Leave it to Jeff Tweedy and Wilco to revisit older styles and still come out sounding fresher than most other bands on the airwaves.

Cymbals Eat Guitars – "Lenses Alien" – 4/5 stars
The Staten Island youngsters return two years after their critically acclaimed debut "Why There Are Mountains" with the equally ambitious "Lenses Alien." The band shows that they aren't quite ready to settle down with the 8 ½-minute opening track, "Rifle Eyesight (Proper Name)," shifting between noise-rock and shoegaze while lead singer Joseph D'Agostino franticly spouts out bleak verses. While the album's tracks don't necessarily flow together smoothly, it suits the thought process of an easily distracted generation, quickly shifting from idea to idea. As the album progresses, the bursts of gnarled guitars and drums step back for a more subdued approach mid album. While the frantic energy and need for release are still apparent, listening to a band mature along the way makes the experience all the more enjoyable.