Who knew a giant tortoise could be that 'lover with a slow hand?' 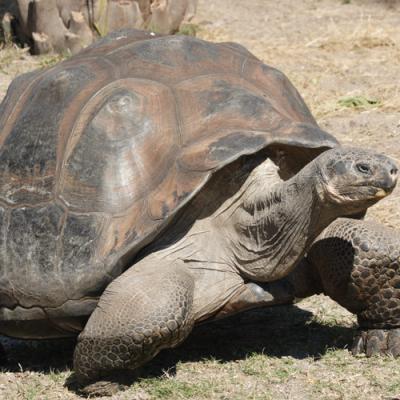 Large kidney stones typically mean eye-watering pain and sudden urinary blockage until the stone "passes" (often requiring expensive sound-wave treatment to break up a large stone). Michigan State University urologist David Wartinger told The Atlantic in September that he had recently happened upon a pain-free even exciting! way to pass stones before they become problems: the centripetal force from a roller coaster ride. In a 200-trip experiment preparing for a validating "human" trial, he successfully passed stones in his hand-held, silicone model kidney (using his own urine) about two-thirds of the time when sitting in a rear seat at Disney World's Big Thunder Mountain Railroad. [The Atlantic, September 2016]

With about 30 states having adopted some form of "stand your ground" defense to assault (or murder) charges, five membership organizations, charging up to $40 a month, have signed up a half-million gun owners concerned that law enforcement treat them fairly should they someday be forced to shoot providing instructions and a "hot line" to coach members on what to tell police, plus liability insurance and help getting a lawyer. Critics say such organizations are also useful to those who might be prone to shooting people and want advice on how best to get away with it. The U.S. Concealed Carry organization's wallet-sized card, to give to police, asks that the shooter under suspicion be given the same consideration as the officers might give to their own colleagues under suspicion. [Tampa Bay Times, 9-16-2016]

In a dozen YouTube videos recently released, Syria's Tourism Ministry praised the country's sandy, fun-filled beaches as ideal vacation spots and its many World Heritage Sites as renowned tourist exhibits attempting to distract world travelers from the country's daily bloodshed (and the wartime destruction of those priceless historical sites). Before civil war broke out in 2011, Syria was a fashionable, $8 billion-a-year destination (and the now-devastated city of Aleppo was known worldwide for its food). [Washington Post, 9-2-2016]

Diego the giant tortoise, believed to be more than 100 years old, now lives in semi-retirement on Santa Cruz Island in the Galapagos, but from 1976 to 2010, Diego brought an almost-extinct species back to life by fathering about 800 babies in the captive breeding program on Espanola, another of the Galapagos Islands. Biologists did not realize Diego's prowess until 2010 when DNA tests identified him as the father of 40 percent of all tortoises on the island. Even on Santa Cruz Island, Diego keeps busy, with a "harem" of six females. (Another Galapagos tortoise species did die out in 2012 when the last male, the centenarian Lonesome George, maintained his celibacy until death.) [Fox News, 9-15-2016]

The New York City Council, grilling police officials in September about their practice of freely seizing money from detainees under suspicion, asked for a thorough accounting of that money (suspecting that innocent victims rarely get it back unless aided by high-powered lawyers). Though (in "crime-fighting" hyperbole) NYPD routinely boasts of its half-million annual seizures, an NYPD official told the council it would be "impossible" to account for everything that keeping track of it all would cause its computers to crash. [Village Voice, 9-16-2016]

The Los Angeles Department of Water and Power is bureaucratically at the epicenter of the state's drought crisis, but in September KCBS-TV aired video of the department actually using sprinklers to water the artificial lawn at a substation in South Los Angeles. A DWP spokesperson said such watering is routine at substations to "clean" the plastic (and wash off any dog urine, for example). [Reuters via msn.com, 9-18-2016]

Wanda Witter, 80, had been living on Washington, D.C., streets for 10 years, but insisting to anyone who would listen that the Social Security Administration owed her sums that recently reached $100,000, and that she had documents to prove it. However, given her circumstances, most regarded her as just another luckless person confused by homeless life. In June, though, after social worker Julie Turner took a closer look and found, improbably, that Witter was indeed owed $100,000 and even more improbably, that all of her paperwork was carefully organized among the unimpressive possessions she hauled around daily, SSA paid her $999 on the spot, and the remaining $99,999 arrived in August. [Washington Post, 8-23-2016]

One branch of the James Harper funeral homes, in Bromley, England, announced its latest promotion via a sign in a front window (reported by the Bromley News Shopper in September): "Wow! Free Child's Battery Powered Vehicle With Every Pre-Paid Funeral Arranged This Month." A Harper spokesperson said the purpose was to encourage residents to think ahead about funerals. [Bromley News Shopper, 9-15-2016]

"Considering Cremation?" was the headline of the Aug. 7 advertising supplement to the Tampa Bay Times (and other Florida newspapers), appearing just below a snapshot of a mom, dad and three youngsters frolicking in the grass, seemingly overjoyed (http://bit.ly/2dBv3yk). Nothing about cremation appeared except dates and sites of free cremation seminars, sponsored by the National Cremation Society (whose website is thankfully more somber). [marketplace.tcpalm.com (Stuart, Fla.)]

The most recent immigrant family living high on the hog in the United Kingdom is Arnold Mballe Sube and his wife, Jeanne, both 33, who drew the equivalent of about $130,000 in government benefits last year, but are still feuding with the Luton Borough Council near London over its inability to find (free) housing adequate for them and their eight children. They turned down four- and five-bedroom homes, were housed temporarily in a Hilton hotel, and said they would be satisfied only with a six-bedroom residence. Mr. Sube, from Cameroon, emigrated to France at age 18, then came to England in 2012 to study nursing at the University of Bedfordshire. [The Sun via Daily Mail, 9-8-2016]

Iowa City Jamboree: (1) Thomas Morgan, 42, was charged in a May 7 incident at the University of Iowa's Main Library when, using a men's room urinal, he turned to reveal to a fellow user that he was "measuring" his penis with a hand-lettered cardboard "ruler." (2) Thomas Warren, 49, was arrested in September near the Iowa City home that he, naked, had allegedly trespassed into minutes before. He was discovered passed out in the grass, though his clothes, car keys and driver's license had been left on the doorstep (along with telltale evidence that he had used the doorstep as a toilet). Alcohol and a controlled substance were involved, said police. [The Smoking Gun, 9-21-2016] [Iowa City Press-Citizen, 9-28-2016]

A woman was arrested on Sept. 7 at the Italian Pizza Kitchen restaurant in Washington, D.C. She was chatting up a police officer she did not know, then playfully took a french fry from his plate. He asked her to stop, but she took another, and when the exasperated officer issued an ultimatum, she took yet another. The arrest report for second-degree theft, cited by WUSA-TV, included "property stolen" as "three" "French fried potato(es)." (2) At the seven-mile mark of the Allentown, Pennsylvania, marathon on Sept. 11, more than 100 runners were blocked off by an unanticipated, slow-moving train causing the athletes one of their best chances to qualify for the gold-standard Boston Marathon (by posting fast times at Allentown). The train lingered for 10 minutes, though some runners climbed over couplings and continued on. [WUSA-TV, 9-9-2016] [Lehigh Valley Live, 9-13-2016]

Last Man Standing: 1917 is an Experience Sometimes at the Expense of Drama

by Forest Taylor1/15/2020, 9:15 AM
The result of such intense cinematography is engrossing but occasionally overwhelming