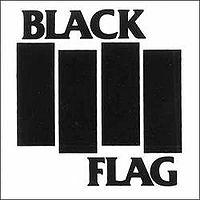 On Tuesday , June 11, the legendary hardcore punk band Black Flag played in front of a packed house at the crooked i. Since forming in 1976 in Hermosa Beach, Calif., Black Flag has been an inspiration to countless musicians, including many in Erie's own underground music scene. The band's 2013 reunion is their first time touring since their break up in 1986, save for one brief reunion performance in 2003.

The nearly-sold-out crowd was littered with long hair, dreadlocks, colorful mohawks, and shaved heads. Anyone from original fans from Black Flag's glory days trying to relive their youth to young enthusiastic fans eager to see a part of history for themselves were in attendance. For me, one of the best reasons for seeing them live is because Black Flag was extremely influential in bringing DIY ethos to punk music, which is an incredibly important part of Erie's underground music scene.

If you're familiar with my blog, then you'll know that Erie has had a strong underground music scene, focusing on punk and hardcore, for nearly 25 years now. This is all possible because of bands like Black Flag touring heavily in the early to mid-'80s, spreading the hardcore punk genre all across the world, and bringing the DIY mindset to places that were sprouting their own new music scenes. Places like Erie. So this show was of monumental importance not only for Black Flag fans, but for anyone who has supported Erie's underground music scene.

Black Flag's performance was preceded by the heavy psychedelic blues/rock group Good For Your, which featured all the members of Black Flag, in addition to Mike Vallely, who took the spot of Ron Reyes on vocals. Good For You's hour-long set was met with semi-enthusiasm by the crowd, who threw the occasional fist in the air, and participated in group chanting when encouraged by Vallely. While they performed well, to many they were just one more thing to sit through before the evening's main event.

After Good For You finished, they left the stage for an intermission to give themselves a break before Greg Ginn, Dave Klein, and Kevin Moore returned to the stage as Black Flag. The audience used this time to get drinks, stretch their legs, and probably tweet and update their facebook status to "about to see Black Flag!" Then roughly 45 minutes later, Black Flag finally took the stage.

"It's not my imagination, I've got a gun on my back!" Reyes began with the opening lines of the song "Revenge," a song which was written during his short tenure with the band. As soon as Greg Ginn hit the first chord, chaos ensued. The crowd of 20-somethings to 40-somethings began headbanging, moshing, and screaming lyrics back at Reyes. Some fans tried to mosh with plastic cups of beer in hand, which resulted in plenty of alcohol spilled all over the floor (as well as my arm), and caused a handful of people to slip.

Though they're older and beyond their prime, Reyes and Ginn both showed a lot of energy on stage. Reyes' voice still had a youthful ring to it, and Ginn moved about banging and bobbing his head as if he was still in his 20s. The member's ages didn't force them to compromise the fast style of playing they're known for. You could have closed your eyes and it would have felt like you went back in time and were seeing Black Flag playing at a small punk venue in the early '80s. Ginn's Theremin also added an eerie element to the performance, with the spacy sound and Ginn waving his hands around the instrument made him almost look possessed by the music.

Black Flag's set consisted of songs from all across their discography, including Keith Morris-era songs from "Nervous Breakdown," songs from Reyes' own "Jealous Again" EP, and Henry Rollins-era classics like "Rise Above," "TV Party," and "Gimmie Gimmie Gimmie." Songs from the band's upcoming album, their first since 1985, including the recently released song "Down in the Dirt," also made it into the set.

The set ended with Black Flag's rendition of Richard Berry's "Louie Louie", which gives off a much poppier feel than the rest of the band's music, but served as an excellent send off, bringing many people arm in arm, dancing together.

Now is the Time

It's Not My Time to Go Go

Down in the Dirt