Watching Star Wars again for the first time in 15 years. 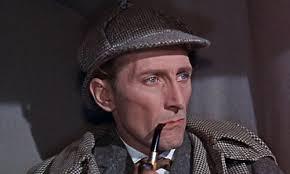 Grand Moff Tarkin before he joined the Empire.

Call it phase three of my Star Wars-watching experience. The first phase started in 1977 when the film was first released, and I – like all the other eight-year-olds I knew – waited in long lines to see it at the theater. I still remember seeing the opening for the first time, the long scrolled introduction, and then the Empire's star cruiser rumbling across the screen. I was overwhelmed by the special effects, by the power of movie's archetypes, by laser gun battles and the light saber duel, and laughed at Han Solo's dry jokes at Princess Leia's expense.

That first phase was infatuation. My friends and I kept a tally on how many times we saw the film (I saw it four times). We'd collect the posters at Burger Chef and buy the action figures. (And somehow I ended up with the legendary and rare "blue snaggletooth.") We saw The Empire Strikes Back and The Return of the Jedi, but they never matched the initial thrill of Star Wars. But we still loved the movies.

And then I saw the movie again in my mid-20s in a re-release to the big screen. And I hated it. It was too long. The acting – especially of Mark Hamill – was poor. The plot was obviously hastily patched together – what kind of script needs a rolling introductory scroll of backstory? Some of the special effects looked dated, and I didn't like Lucas' additions to the movie – the CGI aliens on Tatooine, the Jabba the Hutt scene, that Greedo fired first.

The "prequels," of course, only cemented that impression. That's my jaded phase.

And now, last night, watching with my own kids, I enjoyed it again.

Oh, all the complaints are still there – though I was actually impressed with the acting. Hamill's annoying and amateurish and his Skywalker is not a little whiny ("But I was going into Toshi Station to pick up some power converters…!"), but it's perfect for a brash, self-oblivious, and innocent kid, but the acting is…well…good. Alec Guinness, Carrie Fisher, Harrison Ford are great – but Peter Cushing was also surprisingly good and appropriately evil as Grand Moff Tarkin.

Of course, it works because George Lucas hasn't yet realized how many millions he's going to make with this film, and it's written to be a standalone feature. That is, Darth Vader isn't anyone's father yet. Leia and Skywalker aren't siblings. There's no Anakin, no Jar Jar Binks. There are no sequels, let alone prequels.

This is it. A classic tale, a classic myth. A young man leaves his quiet home to grapple with the world's darkest powers. And he meets a princess.

Really, you have to hand it to Lucas. Every step made after Star Wars -- with the exception of The Empire Strikes Back -- sullied the initial concept. Ruined it, even.

He abandoned archetypes for stereotypes – Jar Jar Binks and Watto, anyone? He turned the Force from a kind of living, harnessable energy into – what? A genetic predisposition? The script in The Phantom Menace was so brutal and Lucas' directing so poor, it caused Liam Neeson vow to quit movie-making. The plot was utterly confusing. The special effects overwhelmed everything – and they were listless.

Don't take my word for it. Read Chefelf's 78 reasons to hate Episode I.

And this garbage from the creator of Star Wars, whose universe was so compelling that it spawned many excellent stories. The Clone Wars cartoon, for example, was fantastic, as were BioWare's "Knights of the Old Republic" video games. I mean, the potential for Star Wars sequels was immense...

So, yeah. I have some issues. But, for one night at least, I put them aside and enjoyed the original almost as much as I had in 1977. And better yet, my kids loved it.